Volkswagen India eventually made a comeback to the Indian SUV segment with the launch of the long-awaited Tiguan. Read on to get an insight into the 2017 Volkswagen Tiguan with our test drive review.

In 2015, when VW officially announced its plan to bring the Tiguan to the Indian auto market, Indian SUV enthusiasts’ hopes for another SUV from Volkswagen were revived. The only SUV produced by the German automaker before the Tiguan was the powerful but exorbitant Touareg, which was shelved in 2014 due to the poor sales number. Fortunately enough, the Tiguan is eventually available in the country in its second generation. In the coming time, the Volkswagen Tiguan Allspace is expected to be launched in India and even substitute the existing model.

Launched in India in 2017 with a price range from INR 27.98 lakh to INR 31.38 lakh (ex-showroom, Delhi), the current Tiguan is targeted at attracting customers away from the entry-level SUVs manufactured by luxury carmakers such as Mercedes-Benz or BMW and at the same time, competing against full-size SUVs like Isuzu MU-X, Toyota Fortuner and Ford Endeavour.

The Tiguan is also the first SUV to be manufactured by the German automaker after the Touareg; therefore, after its launch, many doubts and expectations arise from the customers. This article is going to provide you with a detailed Volkswagen Tiguan review in terms of its design, specifications, riding quality and price. The Volkswagen Tiguan was launched in India in 2017 and poses a serious threat to other SUVs in the Indian auto market.

Exterior - Simple but not boring

The outgoing VW Tiguan had a neutral, conventional exterior styling which will fail to attract people’s attention on the roads. The same applied to the new Tiguan. In comparison with some of its rivals’ styling like the Hyundai Tucson, Jeep Compass, Audi Q3, BMW X1 and Mercedes GLA, that of the new Tiguan has nothing special. The new model comes with increased dimensions and seems to be inspired by the Touareg with some similar details.

The good news is that the Tiguan does not feature an aggressive appearance; its squarish and safe design attracts the niche customers. While the vehicle does not look as exorbitant as its price, there is, luckily enough, a factor which contributes to its high price tag: the impressive list of exterior features.

The top-spec Tiguan Highline variant is equipped with a wide range of tempting exterior features. In the front, the grille comes with wide slats and is positioned between the two LED headlamps with DRLs. The vehicle also sports LED turn indicators and LED foglamps in the lower half of the bumper. The bonnet comes with four sharp creases which further add to the muscularity of the vehicle. All of these features lend the car a confident and purposeful front. On the side profile, the car seems to resemble a wagon rather than a full-size SUV. The Tiguan rides on 18-inch cut alloy rims with Hankook self-sealing tyres. It also gets wide electric outside rearview mirrors, panoramic sunroof. The outstanding shoulder line extends from the front fender to the taillights. The sharp taillights spill over into the tailgate, contributing to the simplicity but elegance of the rear. However, the chrome elements on the rear bumper decrease the elegance of the vehicle a little bit. The sharp taillights add to the elegance of the rear.

Overall, the exterior design of the VW Tiguan is simple but not boring, conventional but not obsolete, thanks to which, the vehicle will appeal to the niche customers.

If the VW Tiguan exterior still has not managed to persuade you to buy the vehicle, then the interior may be successful in doing so. With the premium interior quality which a German vehicle is always well-known for, the top-notch materials, modern and edgy design, and a wide array of cutting-edge technologies, the car fully deserves its price tag.

Rough, scratchy plastic materials are utilized on the dashboard, door armrests and door side panels but in an overall top-notch cabin, they can be easily forgiven. However, instead of the all-black interior paint scheme, the Tiguan should have got a two-tone black and orange seats like in the model debuted at the Auto Expo 2016. This would have made the interior of the vehicle become more interesting.

Once stepping inside the cabin, you can realize the Vienna leather seat coverings and the leather-covered steering wheel. The driver can easily settle yourself in the firm and supportive electrically adjustable driver seat with great visibility. Plenty of sunshine is allowed to enter to light up the cabin, thanks to the panoramic sunroof.

Even with the airline-style completely folded down table, it still gets amber knee room in the rear. Headroom in the rear seat row is also very spacious. In spite of the small floor hump, the middle seat row is still quite comfortable with spacious knee room. The seats are 60:40 split and can be easily reclined forwards or backwards with ease. 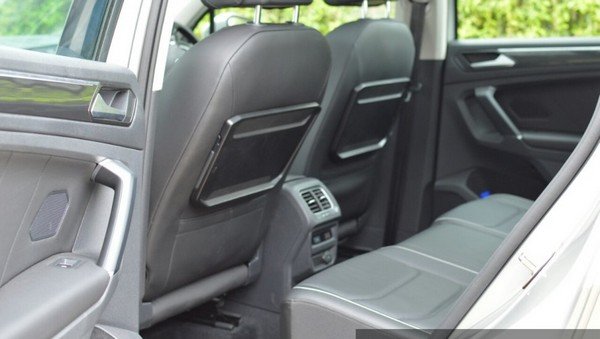 All the seats of the Tiguan are adjustable, which offer the occupants a comfortable journey.

The Tiguan is a highly practical SUV with a number of door pockets and cubby holes which are scattered everywhere inside the cabin to accommodate small personal things. All of them are carpeted to prevent the items from scratching the materials. There is even a hidden drawer below the front passenger seat. An amber storage space is positioned inside the central armrest to store wallets or phones. All these things prove that the German automaker has paid attention to details. The 650-litre boot space which can be expanded to 1,655 litres when the 40:20:40 seats are completely folded can help you easily store all the luggage on a weekend trip. The roomy boot space adds to the practicality of the vehicle.

The India-bound Tiguan lacks VW’s Active Info display option but features the interesting 8-inch Composition Media touchscreen infotainment unit which supports Android Auto and Apple CarPlay connectivity. Nevertheless, this system lacks a connected sat-nav. The display whose UI is quite simple to get familiar with shows the information on the car to the driver. The ambient lighting accents on the panoramic sunroof, the door cards and the LED cabin lights help improve the passengers’ experience inside the cabin.

The Tiguan is even equipped with a Blue Score system, which can improve your driving experience to a great extent. Under the screen is the first-in-the-segment three-zone temperature control which ensures that the rear passengers will have a comfortable journey. The steering wheel has many buttons, which are all very purposeful and easy to be used. The Tiguan is equipped with numerous top-notch interior features.

Regarding safety, the Tiguan achieved a five-star rating in the Euro NCAP crash test. It ensures both the driver and the passengers a safe journey with a wide range of safety features which include six airbags, ABS, ESC, ASR, traction, hill mode descent control, pedestrian protection, ISOFIX child seat, front and rear parking sensors along with reversing camera. Moreover, the Tiguan is also equipped with Active Hood which automatically raises the bonnet by three inches when the car realizes a forthcoming accident with a pedestrian.

The VW Tiguan keeps under its hood only a 2.0-litre TDI 4-cylinder turbocharged diesel engine which can deliver a maximum power of 143 PS and a peak torque of 340 Nm. Unlike other vehicles which are underpinned by the MQB platform in India, for the Tiguan, the power is spread to the four wheels of the vehicle through the new-gen 7-speed DSG (DQ500) with steering-mounted paddle shifters. It is also equipped with a ‘4MOTION’ Haldex all-wheel drive system.

Coming to the performance, given your expectations from a TDI motor, the Tiguan may make you a little disappointed. This will bother drivers who prefer an impressive performance from their vehicles. However, for those who pay more attention to the engine’s decent refinement and constant power delivery will not consider it a serious problem. The Tiguan is powered by a 2.0-litre TDI 4-cylinder turbo diesel motor, which has a good refinement and constant power delivery.

The 7-speed DSG operates wonderfully, providing the vehicle with a light gear changing and smooth upshifts, despite the slow downshifts when power is requested from the engine. The Volkswagen Tiguan is claimed to deliver an ARAI-certified fuel mileage of 17.06 kmpl. In our test drive, the Tiguan has an average fuel mileage from 11.2 kmpl to 12.1 kmpl, depending on various conditions, which are quite impressive figures for a diesel SUV with an AWD system.

The Tiguan has a quite decent and stable riding quality. The driver can confidently drive at a speed of over 140 kmph on the empty highway. However, one thing to keep in mind is that its boxy design translates into a perceptible wind noise of over 120 kmph. In the city, the McPherson strut (front axle) and independently working Multi-link (rear axle) system helps the car easily overcome any irregularities on road.

With the all-wheel drive system and the Drive Mode Selector (Off Road Individual, Off-Road, Normal and Snow, the Tiguan also offers a quite pleasant off-roading experience. It is able to overcome many hard terrains like steep climbs, water bodies, ruts and rain-soaked mud. Although in the brochure, the ground clearance is claimed to measure 149 mm, which is the minimum figure for the Tiguan to comply with the new ARAI regulations. With only one driver behind the wheel and without luggage, the ground clearance seems to be much more amber. The VW Tiguan, with an AWD system and a Drive Mode Selector, can overcome hard terrains.

When cornering, the Tiguan delivers a good performance, too. Some body rolling can be felt; however, for an SUV which consumes potholes, it can be well suppressed. You have a good control over the car at the beginning, thanks to the thick, heavy 235/55 R18 tyres and the all-wheel drive system. The powered steering system can be accurately turned in and altered for utilizing the Drive Mode selector.

The Tiguan was launched in India on May 25, 2017. It is offered in two variants: Comfortline and Highline, which are priced at INR 27.98 lakh and INR 31.38 lakh (ex-showroom, Delhi), respectively. The standard features provided across the variants include LED headlights, six airbags, four-wheel drive system and three-zone climate control. On the other hand, LED taillights, electric tailgate, self-sealing tyres, panoramic sunroof and reversing camera are only equipped on the Highline variant. Also, the top-spec Comfortline runs on 17-inch alloy wheels with 215/65 R17 tyres.

A novice look at the conventional exterior design of the VW Tiguan may put you off it; however, with a closer look, you can realize that it is a well-equipped SUV with a perfect safety level. The Tiguan’s performance will satisfy any drivers who appreciate the refinement and the constant delivery of power rather than those who expect an impressive performance from the SUV. Moreover, the Tiguan also delivers a quite decent riding quality in the city and on the highway. If these are what you are expecting from an SUV with a price range from INR 27.98 lakh to INR 31.38 lakh, the Tiguan is highly recommended as the perfect option for you.

Stay tuned to IndianAuto for more reviews like the Volkswagen Tiguan Test Drive Review We Have Here. Visit our New Cars page for more information and updates about the upcoming cars and the out-going car models.

Volkswagen has just announced the launch of the Tiguan eHybrid in the international markets. Read on to know more about the electrified Tiguan SUV.

VW has finally unveiled the Nivus crossover SUV, which is expected to launch in South-America in June this year. The new coupe-SUV will launch in the European markets by next year.