Mahindra Thar 700 Special Edition Review, Price, Specifications, Mileage, Features and all the details about the limited edition of the current generation of the lifestyle SUV

A couple of weeks ago, the Mahindra Thar 700 has been finally launched in India at the introductory price of Rs 9.99 Lakh (ex-showroom). During the days preparing for the launch of the new-gen Thar, Mahindra has introduced the Thar 700 to bid farewell to the first generation of the SUV and celebrate the 70 years legacy of Mahindra’s off-roading 4x4 heritage. Previously known as the Thar Signature edition, the SUV has been christened as the Thar 700 since there is a batch of 700 units of the iconic off-roader in its current avatar to go on sale in the country. The company is set to introduce the new-gen Mahindra Thar in India in 2020. That being said, it could be the last chance for you to pick up the first generation of the Thar car or says, the last chance to own a piece of Mahindra’s history before it goes off its shelves very soon.
Though the new Thar 700 continues to get the same 2.5-litre CRDe engine under the bonnet, the limited-run SUV still has a lot of interesting things to make it stand out. Here’re all you need to know about the Mahindra Thar 700 special edition.

Of course, the all-new Mahindra Thar 700 bears a huge resemblance in terms of dimensions and appearance with the regular Thar models. The iconic off-roader still carries the same retro Jeep butch look, along with aggressive off-road spec tyres. However, to set it apart from the standard version, the Thar 700 experiences an array of cosmetic updates. First up, the special edition will get special body colours. The all-new Thar 700 comes with only two glorious exterior paint options – Napoli Black and Aqua Marine, which is also found on Mahindra Marazzo sibling. Instead of the steel wheels in the standard models, the new Thar 700 gets new sporty wheels in the form of the five-spoke, 15-inch alloys that were taken from the previous-gen Mahindra Scorpio or the Marksman. The iconic multiple slat front grille is retained but finished in a shade of special black. The side profile and bonnet are also kitted out with decals while the front bumper gets silver finishes. Other exclusive touches that enhance the car’s exterior is the special badge of honour on the driver side front fender that bears the signature of Mahindra Group’s Chairman, Anand Mahindra.

The Making Of THAR 700 | Mahindra Thar

Apart from these, the Thar 700 is still carrying its rugged stance with a host of regular cosmetic bits such as circular clear lens powerful headlamps, butch wheel arches, elegant side footsteps, removable canopy and more.

Just like the exterior, the interior of the Mahindra Thar 700 also features a batch of changes, but they are minimal. The special edition of the Thar sports new black leatherette upholstery with Thar logo on the front seats.
Aside from that, the boxy cabin is still generous and comes packed with a lot of features as seen on the regular Thar CRDe version, including dual-tone treatment on the dashboard, 3-pod instrument cluster, provision for 2-din music system, Aircon with Heater, multi-directional AC vents, door trim pad with hand rest, lockable glove box, a 12V power outlet, side facing foldable rear seats among others. 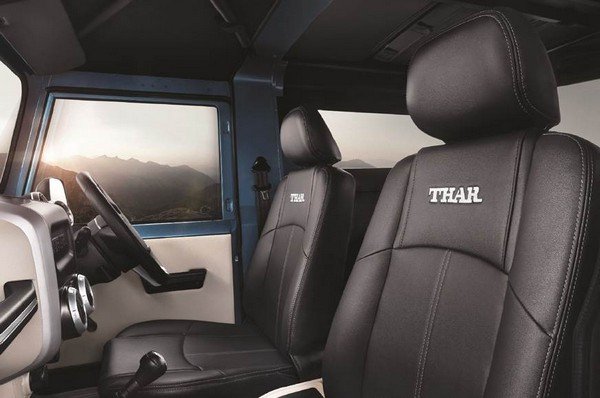 Like any other Thar SUVs manufactured after April 1, 2019, the Mahindra Thar 700 is available with anti-lock braking system (ABS). Nevertheless, the special Thar misses out on driver airbag, rear parking sensors and seatbelt reminder since those kits are mandatory on vehicles produced after the 1st of July, 2019.

As said earlier, the Thar 700 will continue using the same BSIV-spec 2.5-litre CRDe four-cylinder turbo-diesel engine as the standard Thar models, hence it shows off quite a stellar ride quality as the regular Thar car. The engine can churn out 105 BHP of maximum power at 3,800 rpm and 247 Nm of peak torque at 1,800 – 2,000 rpm and comes mated to a 5-speed manual transmission.

Being a true capable off-roader, the Thar 700 also receives the support from the Borgewarner 4WD system with manual shift-on-fly and mechanical locking rear differential that aids the SUV substantially in the toughest driving situations. The SUV can maintain a proper level of traction and pull itself from the roughest of the terrains then avoid being stuck in the sticky places.

The Thar 700 has a departure angle of 27 degrees while its approach angle sits at 44 degrees. With these high approach and departure angles, the Mahindra Thar special edition can be able to climb the steep slopes hands-down without getting scrapped in the front section or damaging the rear end. The rear differential of the Thar 700 is offering mechanical locking that helps synchronize the rotation of rear the wheels at the same speed regardless of traction.
Like the conventional Thar, the Thar 700 is simply a rough 4x4 SUV that offers a whole array of ideal character for off-road oriented buyers in the market. Moving over all kinds of terrains like mud, rock and water is never that easy and whenever we set out for an adventure, this Thar is ready to go.

As I said, there are only 700 units of the special edition of the Thar to go on sale across the nation. Therefore, the new Thar 700 requires a premium of Rs 50,000 over the standard Thar CRDe, which translates into its price sticker of Rs 9.99 Lakh (ex-showroom, Delhi). Like the regular Thar SUVs, the Mahindra Thar 700 faces no rear rivalry in India, except for the Force Gurkha Extreme which is currently priced at Rs 12.99 Lakh (ex-showroom). In fact, the Mahindra Thar is truly an icon, and it is miles ahead of the Force Gurkha in the presence and recognition stakes in the market. That said, considering all the above factors, the limited edition of the Mahindra Thar could very well be the best off-roader for you, indeed.

Mahindra has already started the massive road testings of the 2020 Mahindra Thar for quite some time now. The all-new Thar is expected to get an all-new platform with its engines upgraded to the BSVI emission compliance. The second-gen Thar is likely to make its official debut in 2020 and go on sale a little while away. Mahindra is contemplating expanding the Thar's models range with the petrol variant at a later date.

Mahindra Thar is currently sold in its second-gen iteration and boasts of a super-long waiting period. However, it is a specific trim that commands a waiting period of almost a year. Read here to find out which one.

Mahindra has issued a recall for over 1,5000 units of the new Mahindra Thar due to a possible flaw with the camshaft. The owners of these models are asked to visit the nearest Mahindra dealership.

Launched last year, the 2020 Mahindra Thar has been a runaway success with its waiting period extending up to many months for most variants