Read our in-depth review of Mahindra KUV100 NXT to know all about its Exterior design, Interior comfort, Engine Performance, Fuel Efficiency, and Price. Mahindra & Mahindra is one of the leading Utility Vehicle manufacturers in India, renowned for its brilliant, rugged SUVs like the Scorpio, XUV500, SUV300, Marazzo, and the Alturas. That, however, doesn’t mean that the manufacturer is limited to only UVs. Mahindra also has a few passenger vehicles in its arsenal, like the Verito, Verito Vibe, and the KUV100 crossover-hatchback.

The SUV-inspired stance and design are both extremely evident in Mahindra KUV100. It may be a compact car, but it sure doesn’t feel like one. There are a lot of positive attributes of this car that need mentioning, but a few negative ones that deserve a mention too. Here, we present to you an in-depth review of the Mahindra KUV100 NXT which will walk you through every important detail of the car.

While premium Mahindra vehicles like the Alturas, XUV500, and even the Scorpio, are brilliant looking muscular vehicles, the less-premium cars in the company’s line-up tend to look not as impressive. The KUV100 NXT is an example of the latter kind. It feels over-styled in some areas, and the overall design doesn’t gel together brilliantly. The headlamps are sharp and sleek, resembling that of Land Rover Evoque, but the front grille isn’t equally impressive. The slanting vertical chrome lines do not have a lot of volume, which is a missed opportunity in our books. The front air-dam is quite large though, which looks good, along with the faux skid-plate underneath.

The car is quite tall with a high roof, but the floor is low too. This might be great for increasing interior space, but the exterior profile looks awkward due to this, especially because the length is a little too small in comparison. The wheels, although 15-inchers, also look tiny compared to the huge body. The plastic cladding on the wheel arches and side-skirts help add some muscle though. 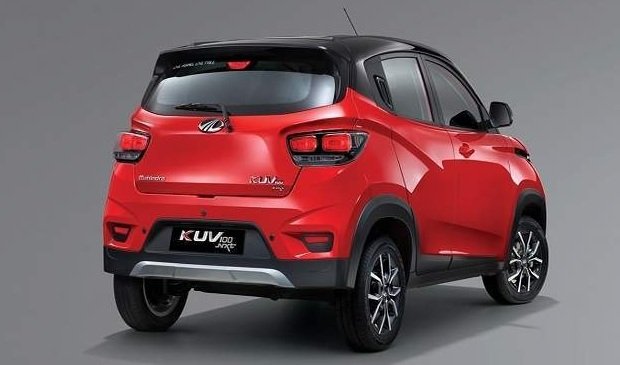 The rear of the car is extremely conservative, with the exception of the sweeping crease line near the tail-lamps, which have a twin-rectangular-pod design on each side. Other than that, there are no details to be excited about.

As covered above, the car may officially be a “compact” car, but it does feel substantially larger than other cars in its competition. The KUV100 manages to stay in the sub-4-metre category, but the width and height are quite generous. That said, the 2.4-metre wheelbase is on-par with its competitors, like the recently launched Maruti S-Presso.

Even though the car is SUV-ish in its design, the low floor of the car means its ground clearance is just 170mm high. As for the weight, that is one big drawback of this Mahindra hatchback. Even though this is a monocoque chassis, the KUV is substantially heavier than other cars in its segment, like the S-Presso and the Renault Kwid.

The interior design of the KUV100 NXT is undeniably a Mahindra car; this could be termed both as a positive and a negative highlight of the car. The seats of the KUV are upright in their stance, like you’d expect in an SUV. The comfort is good and so is the colour scheme inside. The dark interior theme feels more premium than it actually is. Apart from the comfort, the biggest highlight of this car is its seating capacity. While most of the cars in this segment are only 4-seaters (5 if you push it), the KUV100 NXT can officially seat 6-people, three is the front-row and three in the back! The rear seats are fine for 3, but the same in the front seats isn’t advisable unless the middle passenger is a child. Otherwise, three people in the front will end up rubbing shoulders quite often.

The dashboard is simple, with piano black inserts thrown in for good measure. Although instrument console is traditionally mounted, i.e., in behind the steering wheel, there are some unique design elements in the KUV as well. It gets a Joystick-type gear-lever mounted in the centre console. Even the handbrake is dash-mounted! The centre console also consists of a 7-inch touchscreen infotainment system, and you get armrests for both the front and rear passengers, which is an extremely practical touch. Compact cars in India are geared more towards efficiency than towards performance. The same is true for the KUV100 as well. There are two engine choices available: a 1.2-litre petrol and a 1.2-litre diesel. Both are 3-cylinder engines, and as such are inherently not as smooth as 4-cylinder engines. Insulation on the diesel variants is fine, but the same on the petrol variants is a little lacking. Both engines are mated to a 5-speed manual gearbox. Sadly, there is no automatic on offer here.

The petrol variant on the Mahindra KUV100 offers ARAI-claimed fuel efficiency of around 18 km-per-litre overall, which is quite brilliant for a car this size. As for the diesel, the car can achieve a claimed fuel economy of 25 km-per-litre, which is substantially better than the petrol version.

The price list of the Mahindra KUV100 NXT begins at just Rs. 5.56 lakh for the base-variant petrol model, and goes all the way up to Rs. 9.15 lakh for the top-of-the-line diesel model. The exact prices of the different trims offered are listed below.

The top-trims are perhaps a little too expensive, as there are plenty of options in the Indian car market right now between around the Rs. 8-9 lakh mark. Overall, the Mahindra KUV offers you more space than plenty, a good looking interior, a decent exterior design. Apart from that, the engines are quite frugal although not exceptionally so. Sadly, the power on offer isn’t enough to excite you on your weekend drives. If it is excitement and thrill you seek, the KUV isn’t the car for you. In that case, you may want to look towards something with more power on tap. If you have practicality and spaciousness in mind, then not many other options that are as sensible as the KUV. That said, the higher trims of the KUV encroach into premium territory, where there are a lot of different options available, including the best-selling Maruti Brezza, Hyundai Venue, Tata Nexon, etc.

Our spec sheet comparison of the Maruti Suzuki S-Presso and Mahindra KUV100 pits the two against each other in terms of engine specifications, design, comfort, and pricing. Check out which of the two is a better car.

Mahindra KUV100 NXT will soon be updated to comply with the BSVI emission norms. Apart from engine revision, the SUV will not get any cosmetic or feature updates.