Nissan Terrano is given the recent facelift in 2017. On this review of the Nissan Terrano 2017, you will see the detailed changes on this new version.

It was all thanks to the nudges coming from refreshed rivals like the Ford EcoSport and Hyundai Creta that Nissan decided to give its beloved brainchild – the Nissan Terrano an overhaul to keep up with the trend. What’s interesting here is that the remodeling itself is not identified with the car’s exterior which for its part only received two or three alterations which in turn are not enough to be not mistaken for its predecessor – quite unfair in a way I would say. In fact, all the fun lies within the cabin and only one way to experience it firsthand is to drive the car. Drive it to know the difference - the message from the car maker is as simple as that.

On this Nissan Terrano 2018 India Review, let's get into the details of this car model. 1. Nissan Terrano 2017 Exterior: The Slightly-Retouched Outside A quick run through the small updates on the outside before we move to the real party pieces. The current Terrano we’ve got maintain the muscular stance from the previous version. All of this bold-looking design is accentuated with the 4-pod rectangular headlamps; a pair of power retractable ORVMs which is integrated with turn indicators; along with that is the new set of machined alloy wheels.

Old upholstery is replaced by the dual-toned leather coverings of black and chocolate brown. The steering wheel becomes more multi-functional and smarter by being incorporated with control buttons for various features so you will not have to take your eyes off the road anymore. But the real deal here is the cruise control function which liberates you from the drag of having your feet on the accelerator pedal by allowing drivers to set a wished speed and maintain it from there; just hit the button on the left side of the steering wheel and lay back comfortably. 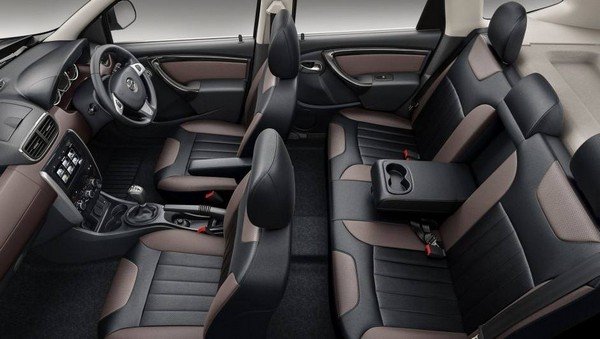 Being at the centre of the front cabin, the up-to-date 7-inch touchscreen infotainment display is more user-friendly and highly responsive, featuring navigator & voice recognition, iPod support and Bluetooth and gives you access to multiple recreational apps as well, though the system strangely doesn’t have compatibility to Apple CarPlay and Android Auto, and the resolution is quite of average quality, to be honest. But if there is something in which the Terrano 2017 can take pride, then it is the spacious luggage space. Standing at a volume of 475 litres, the Terrano’s storage compartment eclipses that of the Ford EcoSport (which equates to 346 litres), and competes with the boot of Renault Duster which has the same volume. And considering the standard boot of 300 litres to be viewed as ideal, this is one of the few assets Terrano possesses to win over customers.

All fun aside, we now divert our attention towards the safety package which looks like to be the aspect that sees the most investment from Nissan. Apart from the entry-level XE, every other model is equipped with dual front airbags and a combo of ABS (anti-lock braking system) and EBD (electronic brakeforce distribution) to begin with. The top-spec variant XVD PRE makes the exception to exclusively have ESP (electronic stability programme) with it. Other crucial features include emergency brake warning, anti-pinch driver side window which will roll down the moment it senses obstacles in the way. And last but not the least, Hill Assist Control is here to help you out when driving up incline or slope by keeping the braking system engaged, buying driver some time to switch throttle.

3. Nissan Terrano 2017 Performance: What Is It Like To Drive

Motor-wise, the car will continue to be powered by both engines which powered its predecessor. The first choice is the 1.6-litre four-cylinder petrol unit which churns out 102 PS of peak power and 145 Nm of peak torque and is accompanied by the 5-speed manual transmission.

Meanwhile, the 1.5-litre diesel motor produces a max power of 110 PS and 245 Nm of max torque. It comes in pair with the 6-speed auto drive and assures double bonus in acceleration and fuel efficiency.

Receiving the boost from high clearance, running on poor-quality thoroughfares turns out to be a piece of cake to the current Terrano

The car shows excellent performance when it comes to making a turn at a high speed thanks to the small turning circle of 5.2 metres, making it a perfect bet on handling zigzag & windy lanes, or steering around within the confines of a city. This, being coupled with the abundant ride height of 205 mm, makes the tackling hard roads an easy task - quite an envy of other automotive brands you can say. And yes! If you happen to be seeking for a vehicle which can withstand potholed and bumpy roads, seriously switch your attention back to the Terrano if you are looking at another car.

The compact SUV did run its round of leveling up but it seems that the nearly-unchanged look combined with the entire package of interior don’t pose that much of competition or to put it simply, the Terrano itself doesn’t strike as much of a threat to other cars in the segment even after going through all that hard work of facelifting. But to their credit, Nissan did give its shot to catch up with the safety standard by adding contemporary features, which were not available on the outgoing model, to their update list. It may not sound much and there will definitely be some of you folks finding it quite a disappointment in style or fashion but still, you can’t deny its reliability when tackling bad roads, and that I will give to the car maker.

>>> For more updates and information of the latest car models in India, visit IndianAuto.com

Nissan Terrano has been discontinued and the main reason for it seems to be the SUV's poor sales performance.

While some speculations abound that Nissan-Datsun cars will be discontinued in BSVI era, the company is instead planning a slew of new launches in near future