Renault-Nissan Alliance’s SUV story in India started off on a high note after the introduction of the Duster in our market. Following this venture, the company sought to introduce a slightly more upmarket CUV and this came in the form of the Nissan Terrano. Which was quite simply a re-badged Duster with more chrome and fancier interior bit. However, after failing to woo the Indian car-buying demographic and the cut-throat rise of rivals like the Hyundai Creta, the company decided to have another go at the premium CUV market with the Renault Captur. Powered by the same engine options as the Duster and built on the same Logan platform as the Duster, the Captur was definitely made to look the part with rounded edges, swooping curves and features like segment-first all-LED headlamps. However, despite its mix of French flare, Japanese reliability and right price-point, the Captur wasn’t exactly the success story that the company had hoped for. Well, the company refused to take its foot off the pedal and now, it is time for Nissan to show us its magic. While the Japanese giant introduced the Kicks moniker long before its launch in India, the model which we get in India is a whole lot different. Nissan has just made massive updates to the Kicks in India, in all effort to create a stronger foothold in the crowded premium mid-size SUVs segment. But before you feel shortchanged, there is more to it than meets the eye.

While the Nissan Kicks may be mechanically identical to the Renault Captur underneath, its exterior design is a whole different ball game. While the Captur followed more of a coupe-like crossover design, the Kicks has distinct traits of a butch SUV with crossover styling thrown in for good measure.

The front fascia follows close to Nissan’s new design philosophy and also gets its signature V-motion grille. Other highlights including a sloping bonnet design, raked windshield and pronounced headlight assembly. The front is also the part which is the most closely related to the Kicks sold in International markets. 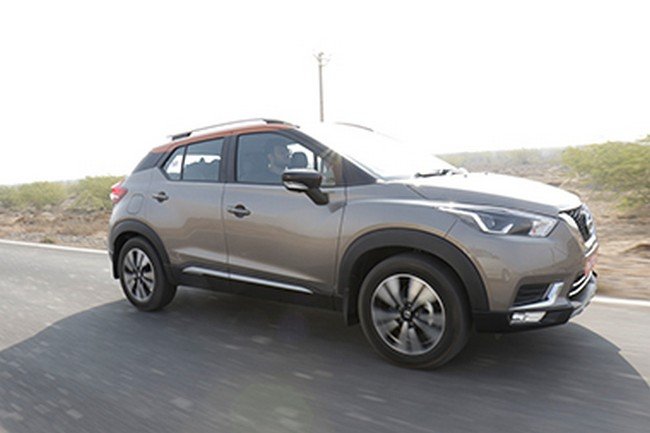 Step to the side and you’ll notice that the edgiest and most intimidating designed aspect is that of the side. In our opinion, Nissan has really got it right. With a contrasting floating-type roof design, black plastic cladding on all four corners, flared fenders and 17-inch twin-spoke alloy wheels, the Kicks perfectly combines its sporty character and poised behaved into one cohesive stance.

However, as good as the Kicks is to look at from the front and side, it is equally bland at the rear. What seems to be a cut-paste job from the Captur with slightly sharper cues, doesn’t really gel well with the overall edgy exterior design of the other three corners. Overall though, we feel that the Kicks is definitely one of our hot favourites when it comes to looks. What prevents it from being a complete hot-looking package it that quirky rear end and stiff competition in the market.

Right out of the bat, you should know that the V-platform-based international version of Kicks is actually smaller in size than the one we get in India. Now, comparing the Kicks with its domestic competition, we are happy to report that the Kicks shines bright here too. With a wheelbase of 2,673mm, the Kicks might be similar to that of the Captur but is a whole 63 mm longer than the Creta. 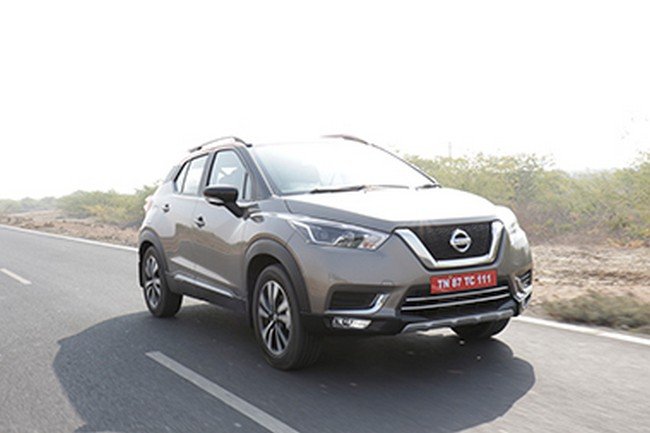 The story is the same with its 1,656mm height as well, the Kicks is taller than the Hyundai Creta. On the other, when it comes to length, the Kicks doesn’t just blow its stablemate out of the water but is, in fact, the best in its class. The Kicks measures 4,384mm in length which is longer than the Captur by 55mm and the Creta by an eye-opening 84 mm. Despite its compact and tucked-looking package, the Kicks is and actually feels larger than its competition. Even with all the sleekness and low roof height, the Kicks stands 210mm off the ground and is very practical for road/rough road/mild off-road use.

From the very word ‘go’ the Nissan Kicks was made to outshine the Renault Captur in the premium aspect, and it does not disappoint. In fact, the Kicks has one of the most premium cabins in its class, even the Creta to a certain extent. From the soft-touch material on the dashboard, leather-wrapped flat-bottom steering wheel, piano black trim, brown-black contrast colour scheme and premium-looking faux leather seats with diamond pattern stitching in the middle, everything in the Kick’s cabin has been built to dial the luxury level up to a whole new level. There’s more too. It has all the hi-tech gadgets that one could ask for too, in addition to the luxuriously appointed cabin. It gets an 8-inch touchscreen infotainment system with Android Auto, Apple CarPay and Wi-Fi hotspot, reversing camera, cruise control, auto AC, rain-sensing wipers, automatic headlamps, adaptive fog lamps, adjustable driver-side seat and armrests for both rows of seats. However, the highlight of the entire cabin has to be the segment-first 360-degree bird-eye view camera which uses feed from cameras in the grille, tailgate and under the ORVM’s to give the driver a complete view of the car’s surroundings when backing into a tight parking space. Speaking of space, the Nissan Kicks has loads of it to offer the passengers in the front but passengers in the rear bench will struggle slightly with knee and elbow room. However, with all the right boxes that the Kick’s interior ticks all the right boxes, there are a few niggles which one might have to deal with in the Kick’s cabin as well. The most irritating of these is the height of the driver’s side seat, which sits substantially taller than any of the other one’s in the cabin. While this wasn’t an issue for my colleague who stands tall at 5’11, it was a different story for my 5’6 stature. Other niggles include the lack of illumination for the steering wheels controls and telephone/audio stalk, a tiny glove compartment, lack of storage space under the front armrest (which is wasted space now, really) and lack of a USB port or mobile phone pocket for the rear bench. Another important point to keep in mind is that, while the premium-looking seats are excellent to touch, they offer no lumbar support whatsoever. I found myself have to adjust my position every 10 minutes and not a whole lot relaxed after spending 3-4 hours in the seat. As we mentioned earlier, the Nissan Kicks shares its engine options with that of the Renault Captur, Renault Duster and Nissan Terrano. It gets two engine options - a 1.5-litre diesel and 1.5-litre petrol. In our first-drive review, we only got a chance to sample the diesel variants but will be bringing you a complete review of the petrol version soon. The motor starts up with a muffled clatter and is definitely very refined. While a pickup in 1st gear is done without any hesitation, there is a definitely a lack of oomph when trying to get up to speed in 2nd. There were many instances in city-driving conditions where turbo-lag stuck its ugly head out and hindered any sort of progress. What this also means is that timing your gear changes to be in the right powerband at the right time is extremely important when driving the Kicks in a spirited manner. Which is oddly satisfying in its own way. However, once you are up to speed and cruising in overdrive, this is where the engine comes into its own. It has the ability to run hours at a time, without ever feeling strained and instant roll-on acceleration means easy overtaking at higher speeds. 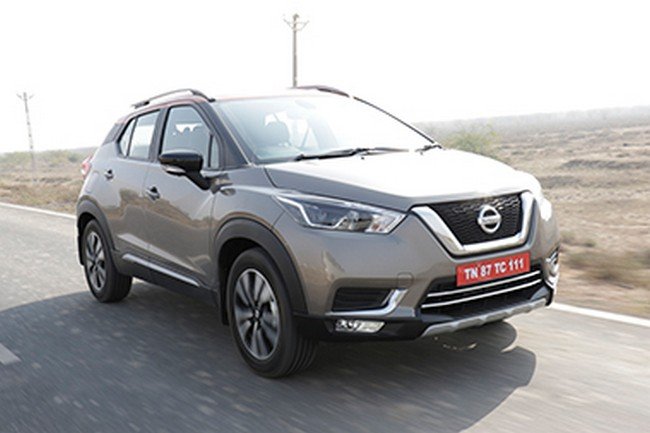 The only transmission on offer with the Kicks for now is a 6-speed manual. While the gear ratios sit a tad too high of appropriate use in the city, the gearbox offers a positive shift action and feels cooperative when being put to its paces.  While the Kicks only has one gearbox on offer for the time being, Nissan India has hinted at strong possibilities of introducing a CVT automatic gearbox in the near future.

Based on the familiar Renault B0 platform, we went into the test with preconceived notions and alas, we weren’t wrong. While there is plenty of mechanical grip for tight traffic manoeuvres and flowing corners, the factor that is most responsible for our lack of confidence was the body roll and there is plenty of it. However, the single biggest dynamic highlight of the Kicks is its high-speed stability. The car stays well planted at triple-digit speeds and has no problem covering long distances driving several hours at a time. Another area where the Kicks deserves praise is in its ability to absolutely chew through undulations, be it on tarmac or on gravel. As for the steering, the combination of FWD and diesel power make it slightly heavy in slow-moving conditions but it is quite progressive and starts to weigh up better as the speeds start climbing. In conclusion, we feel that this is the best attempt by Renault-Nissan so far to penetrate the premium CUV market in India. Yes, the Duster wasn’t a bad attempt either but it was and still is utilitarian. The Kicks, on the other hand, takes all the good bits from the Duster and offers it in a more complete, segment-leading package. It has the looks, the class, the features, the power and the might of Renault-Nissan behind its back. But will that be enough to topple competition from India and South Korea? Well, we definitely feel so. It is certainly more unique among the three and while it isn’t the best for city driving, it certainly has the best highway manners in the class. With a price tag starting at INR 9.49 lakh (ex-showroom, Delhi) and going up all the way to INR 14.14 lakh (ex-showroom, Delhi), it certainly covers a wider base than any Renault-Nissan SUV has done so far in India. Add a 2-year/ 50,000 km warranty, 2-year roadside assistance and service maintenance to the mix at no extra cost and the Nissan Kicks should start looking like a worthy option to consider.

The Kicks is the new SUV from Nissan for India market. It is expected to meet the corresponding popularity as it is in the international market. Let's find out more about Nissan Kicks here.

Nissan is about to launch Nissan Kicks facelift in the US market. Recently, Nissan has dropped a new teaser for the upcoming model.