Toyota Yaris is a latecomer in the segment of mid-sized sedans, however, the new kid has plenty of new things to offer their customers. Let's find out what Toyota will give us with their latest sedan in the Indian market.

Toyota has been done a pretty good job with their SUVs and MUV in the Indian market. Cars like the Fortuner and Innova are among the best-selling and most favoured models in the segment. Even being quite successful in the larger vehicles market, Toyota doesn’t have much confidence with its smaller-sized cars, like the Etios Liva, Corolla, and Camry. These cars don’t receive the same warming response from Indian customers. Which might be the reason for its late-coming in the compact sedan segment. Better late than never, Toyota has entered this specific market with its Toyota Yaris.

After entering this segment, Toyota Yaris will take on other established names like Maruti Ciaz, Hyundai Verna, Honda City, or the lesser-known like Volkswagen Vento and Skoda Rapid. What would this car offer to level up their competitiveness in such a fierce race? Let’s find out the answer with IndianAuto with our comprehensive review of Toyota Yaris. Toyota Yaris doesn't have the striking design, but still, charming enough to catch the eyes of bystanders

It seems that Toyota wants to keep the Yaris as clean and neat as possible. The Yaris’s design doesn’t include any Wow factor with minimal cuts and creases. But it doesn’t mean that the Yaris is not a good looking car. Indeed, Toyota has optimized the styling for an attention-grabbing effect.

The Toyota Yaris looks sporty at the front with extra-wide cascading horizontal-slatted grille which resembles one from the Camry, and a long slim headlamp bridged by a thin grille with Toyota badge at the centre, as well as a curvy fire-like fog-light unit, not to mention the sharp shoulder lines. It is also worth mentioning that the Yaris features a projector LED DRL headlamp.

The Yaris also looks prominent at the side profile. The dual-tone paint scheme is well-reflected by the black roof, blacked-out windows and ORVMs. It features strong rising shoulder lines and stylish-looking alloy wheels. The rear end of the Toyota Yarish is posh and elegant with a charming rear bumper and taillight with LED treatments, well-sculpted tailgate housing a big Toyota badge.

When it comes to the sizes, the Toyota Yaris looks good on the perspectives of number. The Yaris measures 4225 mm long, making it one of the longest sedan in India. The car also gets a decent wheelbase of 2550 mm as well as a super-large boot capacity of 476 litres. The dashboard design of Toyota Yaris is optimized for practicality

The bright beige interior theme bright up the cabin. It also provides high practicality with a well-thought layout and easy-to-follow function.

The dashboard applies the beige-black dual-tone with some chrome accent contouring the central console and the air vents. The head unit with gloss black garnish enhances the premium. Besides, the leather upholstery coving the seats, armrest and steering is of high-quality and feels like the real leather.

The passengers at the rear bench could enjoy the comfort from the highly-effective roof-mounted AC vent. This air vent is able to release cool airflow for either the rear or the front, which means that it could double the cooling effect for the front passenger in case, the rear seats are free. Rear passengers are given special treats like the manual sunshade, 12V sockets and individual reading lamps.

Another highlight of the rear seat is the modern-looking instrument cluster with a 4.2 inch MID which provides information about the temperature, fuel consumption, and distance-to-empty, for example.

The Toyota Yaris accommodates 5 occupants on the inside. The seating space is highly reasonable. The rear seats are placed nicely to make getting in and out of the car so easy.

The interior space of the Yaris is not a proper five-seater, but rather a four-seater

As mentioned above, the Yaris comes with a considerable width and height. But could it be translated into a good cabin room? The truth is, Toyota Yaris doesn’t feel as wide as the dimension figure suggests. In fact, it possesses a smaller shoulder room and knee room than most of its rivals like the City and Verna. Due to the sloping roof, headroom doesn’t feel ample enough for tall folks. It could provide a proper room for four rather than for five people.

The seat of the Toyota Yaris offers adequate support. The cushioning provides a good lateral assist. Moreover, the driver seat comes with an 8-way electric adjustment. 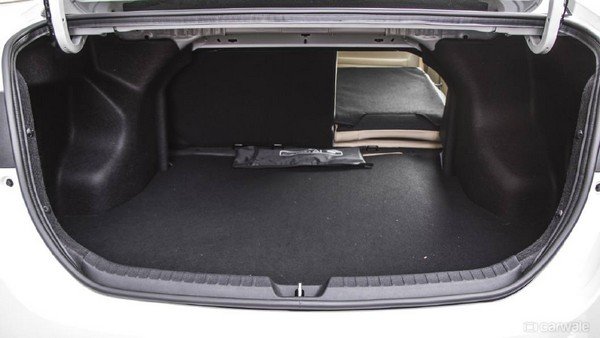 Toyota Yaris has a large boot space of 476 litres

The Yaris offers many storage solutions throughout the interior, for example, 1-litre bottle holders on the two front doors and the central console, and 0.5-litre bottle holder at the rear door. And most importantly, it has a large boot space of 476 litres. Moreover, the cargo space could be extended with the foldable 60:40 split seat, and Yaris is the only in its class to have this feature.

Toyota only comes with only one engine option which is the 1.5-litre, 4-cylinder petrol engine. The engine could make 107PS of power and 140 Nm of torque. It is paired with either a 6-speed manual or a 7-speed CVT transmission. The CTV comes with paddle shift. The limited engine offer comes with a higher level of refinement. The Yaris goes smoothly across the rev range. The engine could get quite loud when going beyond 400 rpm. At high revs, you have to work the gearbox quite hard to get enough power, and overtaking at high speed might require downshifting.

The CTV version allows easy gear shifting. The shift is done in a smooth and effortless way, however, it might feel underpowered at speeding up. On the other hand, the manual version with a six-speed gearbox comes with light and direct shifter.

Toyota Yaris brings out a stable ride quality regardless of the speed. It irons out most broken roads, potholes, speed bumps with a composed manner.

7. Toyota Yaris Price: Is it affordable?

Toyota Yaris’s price ranges from 8.76 lakh and goes up to 14.18 lakh. With this price bracket, Toyota Yaris seems less affordable to its direct rivals in the sedan segment, especially with the imminent new-gen Honda City.

8. Verdict: Is Toyota Yaris Worth Buying?

Considering the hotly-contested sedan segment of India with strong-running models like Honda Amaze, Honda City or Maruti Ciaz, the Toyota Yaris has been finding it hard to steal a bit of limelight. Surely, the Yaris is an underrated car in India and there are many things that don't work for the Yaris. If you consider Toyota traits, the Yaris is certainly worth your buy, especially for the 2020 Yaris which has registered a considerable growth in terms of sales after launch. To be honest, when considering a mid-sized sedan car to buy in India, the Yaris might not be the first option coming to our minds. It's not the most striking sedan when it comes to design nor the most spacious ones out there in the market. The Yaris doesn't score well for its value-for-money quotient at the same time. However, staying with the Yaris and you will surely find something that you like about the car.

Toyota Yaris and Hyundai Verna: Which one should be your future car?

Toyota's new sedan released in early 2018 will lock horns with Hyundai Verna in the segment of the mid-size sedan. Will the new kid score over the longstanding name like the Verna?

Toyota has introduced its latest sedan in the Indian market, Toyota Yaris in earlier 2018. And now we can see the fierce competition between Toyota Yaris and Honda City. Read on to find out which you deserve to catch your eyes.

The Toyota Yaris is the first vehicle to experience crash tests according to the upgraded Euro NCAP testing standards. The vehicle has delivered excellent results.

The TRD and Modellista customization kits were introduced for the Toyota Yaris Cross on the same day when the car marked its official debut in Japan.

Toyota will soon introduce the Yaris Black in the Indian market. The all-black limited-edition will feature subtle cosmetic tweaks in comparison to the outgoing model.