Despite not being the first compact SUV to come to India, which was, in fact, Premier Rio, the Ford EcoSport has been among the best-selling small SUVs in India for some time now. First launched in 2013, the sub-4-metre compact SUV attracted so many auto buyers that dealers, at one point, had no choice but to refuse bookings.

After almost four years, again, the American auto manufacturer made the compact SUV segment more plentiful than ever before with the launch of the facelifted Ford EcoSports with a new appearance, redesigned interior and the addition of a new petrol motor option. This article is going to provide you with a detailed review of the top-spec variant, the Ford EcoSport Petrol AT (Titanium Plus), so that you can have something to refer to before making a decision to purchase this vehicle. The Ford EcoSport received a facelift last year with considerable upgrades in all aspects.

Most of the alterations are done to the front of the vehicle. The updates include a new a single piece hexagonal grille, wider projector headlamps and LED DRLs, a brand-new bumper, larger triangle fog lamps and turn indicators positioned in a wedge-shaped housing. Moreover, the slim slat which was once positioned just below the bonnet has been removed and the grille now has been raised a little bit. The Ford Logo, which used to be on the slat, has been repositioned to the centre of the grille. The bottom splitter has also been mildly redesigned. Almost all the Ford EcoSport's upgrades are done to the front.

Side profile and rear

As regards the side profile, the car is now equipped with 17-inch alloy wheels. In the rear, there is a slightly updated bumper which runs towards the rear and a new spare wheel cover. The side profile of the Ford EcoSport has also received some alterations. Likewise, the rear has also been marginally updated.

All of these features have contributed to the good-looking appearance of the Ford EcoSport, which never fails to attract anyone on road.

The interior of the Ford EcoSport has started to show its age since its introduction in 2013 and Ford has responded to this call with a thorough update to the cabin.

The front seat row is wider and comes with improved side bolstering and softened cushioning; likewise, the rear one gets better contouring with softer cushioning. The rear seat also receives a drop-down armrest with cup holders. After a-day journey in the vehicle, we can draw the conclusion that the seats are now both more comfortable and supportive.

Boot space remains unchanged with a 346-litres storage capacity but has experienced some alterations with a new three-position floor. The position at the bottom provides the most amber space whereas the second position has been raised by around 2.5 inches in height. In the meanwhile, the third position which has been slightly angled enables the floor to match the height of the folded rear seat row. This position helps the boot space expand to as much as 1,178 litres.

With fierce competition from other compact SUVs like the Maruti Vitara Brezza, the Tata Nexon, Ford feels a pressure to give its interior a comprehensive update with a wide range of top-notch features.

The most outstanding upgrade is the brand-new dashboard with an 8-inch SYNC3 touchscreen infotainment system which is responsive and can be easily operated. This system supports Mirror Link, Android Auto and Apple CarPlay connectivity. Moreover, the touchscreen system can be even integrated with your mobile phone’s hotspot for functionality enhancement and an ambient lighting setup. Apart from these, the driving wheel, which comes with paddle shifters on the AT model borrowed from the global Ford Focus, two USB ports and a 12V socket are some of the other outstanding features on the Ford EcoSport. 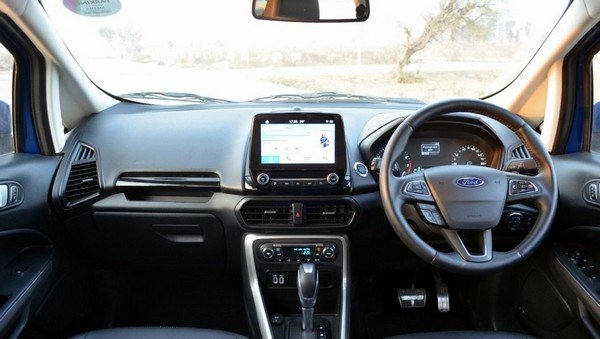 The Ford EcoSport has been equipped with top-notch features, especially on the Titanium Plus (Petrol AT) variant.

The vehicle is also packed with a brand-new instrument console but its information display looks quite odd. While its appearance can be improved a lot, all the necessary information is provided there and there is even a display exclusively for the tyre monitoring system. The Ford Ecoport misses out on sunroof and rear AC vents, but its interior can be quickly cooled down. Therefore, there is hardly anything to complain about the environment inside the car. 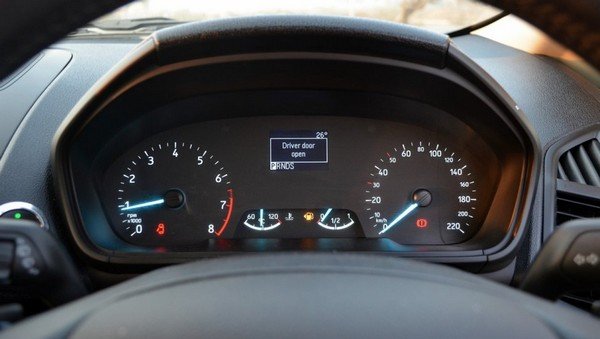 The instrument console in the Ford EcoSport is new but has an odd-looking display.

Another smart feature in the Titanium+ variant is the keyless entry setup which comes with a sensor on both the driver and the passenger door handles. As long as your key is stored in your pocket, when you grab the door handle, the door will automatically unlock. Likewise, when you leave, just tap the handle, then the car is locked.

The Ford EcoSport measures 3,998 mm in length, 1,881 mm in width and 2,498 mm in height. It offers a 2,519 mm wheelbase and 200 mm ground clearance. All of these are leading figures in the segment. You can read a detailed comparison between the Ford EcoSport and its rivals in terms of the dimensions here.

The 2017 Ford EcoSport keeps under its hood two motor options. The first one is still a 1.5-litre TDCi diesel motor with four cylinders which can produce a maximum power of 100 PS against a peak torque of 205 Nm and is mated to a 5-speed MT gearbox. Although the diesel motor remains the same, a marginally different state of tune has been adopted to the engine. The diesel unit can still offer both the driver and the passengers a very pleasant journey, thanks to a constant torque curve and hardly any noticeable acceleration whenever the turbo kicks in. Noteworthily, the fuel mileage has improved by 3 kmpl to 23 kmpl in comparison with the earlier version.

The second one is an all-new 1.5-litre 3-cylinder naturally aspirated petrol engine, which can produce a maximum power/torque output of 123 PS/ 150 Nm. This motor is lighter, more compact and more efficient than the previous version. Ford has successfully reduced the noise from this motor with a new balancer and engine mounts. The noise decreases most clearly when the car gets moving, which makes it a perfect choice for city driving. The petrol engine of the Ford EcoSport now has been coupled with a 6-speed AT gearbox.

Having said that, the most remarkable alteration to the engine of the Ford EcoSport is the addition of the 6-speed AT gearbox to the transmission options available on the petrol motor besides the 5-speed MT unit. In the meanwhile, the 6-speed DCT unit has been dropped. And the Ford EcoSport Petrol AT in the Titanium Plus trim is also the vehicle that we test drive; therefore, we would like to focus on the handling and riding quality of this motor in this article.

The new motor can ensure a comfortable journey in city. It gets a sufficiently strong mid-range, which means that the vehicle can exceed the legal speed quite rapidly. Moreover, a ‘Sport’ mode is also available, which enables a gear to be held to high up in the rev band and the progress to be relatively quick.

Moreover, the new engine can also offer the car a more dynamic version than previously. When the car is driven at a low speed, the steering is light, but the ample weight and the light nature are still maintained, which will absolutely attract many Indian auto buyers. On the other hand, when it accelerates, the weight increases rather quickly. Therefore, there is nothing to complain about here.

Nevertheless, with the 17-inch wheels and the 205/50 R17 section tyres, the Ford EcoSport’s riding quality has suffered a bit. Although these features undeniably look good, their low profile is not suitable for Indian roads. As a consequence, imperfections are not properly ironed out while certain bumps can get jarring. However, the Ford EcoSport still manages to offer a sweet handling and a pleasant drive to both the driver and the passengers. 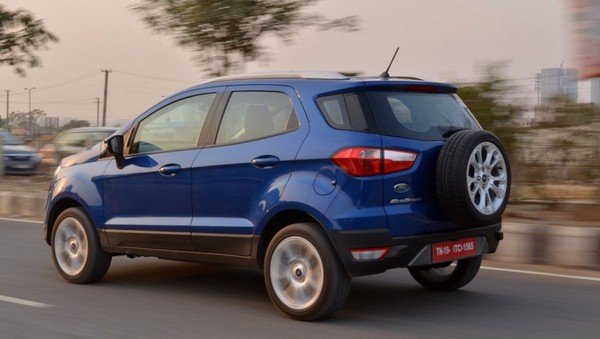 The 2017 Ford EcoSport Titanium Plus (Petrol AT) offers a quite satisfactory performance.

The Ford EcoSport Petrol AT is available in two variants Trend and Titanium Plus, which are priced at Rs 9.77 lakh and Rs 11.37 lakh (ex-showroom Delhi), respectively. The only alternative on offer now is the Hyundai Creta, but it is much more expensive, at Rs 13.04 lakh (ex-showroom, Delhi) and is still not available with an AT gearbox. Refer to the table below for the detailed price list of the 2017 Ford EcoSport across its variants (all prices are ex-showroom).

The 2017 Ford EcoSport has received a thorough update in terms of its exterior, interior, performance and also riding and handling quality. Thanks to these updates, now the car is much more good-looking, modern and offers an excellent riding and handling quality. Both the petrol and diesel motors offer a pleasant journey. The petrol AT version delivers a quite satisfactory performance. Nevertheless, there is a disappointing thing which is its fuel mileage, which stands at only 9-10 kmpl, far exceeded by its manual or diesel counterparts. Furthermore, the rear space, particularly the legroom is still not sufficient. A set of 16-inch alloy wheels should be used instead of the 17-inch ones to optimise the riding quality.

That said, besides the recently-launched Hyundai Venue, the Ford EcoSport is the only compact SUV available with a petrol AT variant in the Indian auto market. Moreover, while diesel vehicles are losing in popularity, AT gearbox is becoming more and more popular. These factors have allowed the aggressively-priced Ford EcoSport petrol AT to attract numerous auto buyers.

Visit our New Cars page for more information and updates about the upcoming cars and the out-going car models.

This article is going to provide you with a detailed comparison between the Hyundai Venue and its rivals in terms of their dimensions.

For many reasons, it took Ford nearly 5 years to make the belated introduction of the upgraded Ecosport. But who really keeps track on time to seriously care about how late it is. The fact is we are now presented with this new sub-SUV and you can put your expectation to rest.

Ford Bronco and Family To Get Exclusive Showrooms

With the new Bronco arriving in US showroom mid-2021, Ford Dealers have requested the automaker to come up with designs for a separate Bronco showroom. Take a look at the pictures below of what they may look like.