Ford has updated the second-gen Figo with new styling, features, engines and price tag. Does it have what it takes to be a worthy successor? Let's find out in our 2019 Ford Figo test drive review here

When it comes to hatchbacks in India, car manufacturers have a tried-and-tested formula for it to do well. Take a spacious body with plenty of room inside for your wife and four kids, add fuel-efficient low output petrol and a diesel engine to the mix, put an inexpensive but not cheap price tag on it, offer affordable service and add a dash of luxury - voila! However, there have been some which went above and beyond what was considered to be the norm. These hatchback heroes may have come up short in the pricing or features but by god, did driving them really put the fizz on every Sunday morning drive. One such name is the Ford Figo. A globally successful car from the American giant, which was first launched in India in India in 2010. Eight years on, the Figo is now in its second-generation iteration and has just received its mid-life facelift. From styling and features, to engines and price, everything has changed in this latest version. Let’s start with the superficial changes first, the exterior design. While the layman might pass off the design changes made to the second-generation Figo as negligible, there definitely are enough to distinguish the car from the outgoing 2018 model. The biggest and most change is to the front. The Aston-Martin-esque design of the nose remain but the vertical slat grille has made way for honeycomb mesh design surrounded by a chrome bezel. Below that, you’ll find that the front bumper design is sharper with the lower-end of it finished off with by a pair a C-slat surrounds around the fog-lamp housing. The headlamp design is also new and gets a 3D-like housing for the lamps. Overall, the Figo now looks meaner and more menacing, especially if view in another car’s IRVM.  Step to the side and the only change you’ll find here are a newly-designed set of 14-inch alloy wheel. The rear-end, however, remains untouched over the outgoing version. With the 2019 Ford Figo, the company has simplified the variants list into three distinct trims - Ambiente, Titanium and Titanium Blu. The latter comes in as a replacement for the Figo S and gets the sportiest and in our opinion, best looking exterior touches of the three. 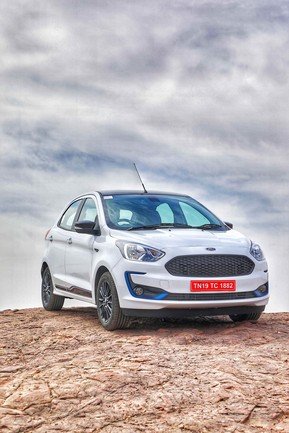 Opt for the Titanium Blue variants and you will also get the blacked-out front grille with a black surrounding bezel, black sporty decals on the side and bootlid, blacked-out 15-inch split eight-spoke alloy wheels, black contrast roof and blue contrast accents on the front bumper and tell-tale bootlid badging. Step inside and the sporty theme continue here too. To distinguish this top-end variant from the rest, it gets all-black interior with blue accents on the upholstery and door trim, with a blue needle on the odometer for that extra sporty touch. Overall, while these changes are subtle, they definitely do their bit in sprucing up the design over the outgoing one. We especially love the way the Titanium Blu stands out from the crowd, even a mile away. 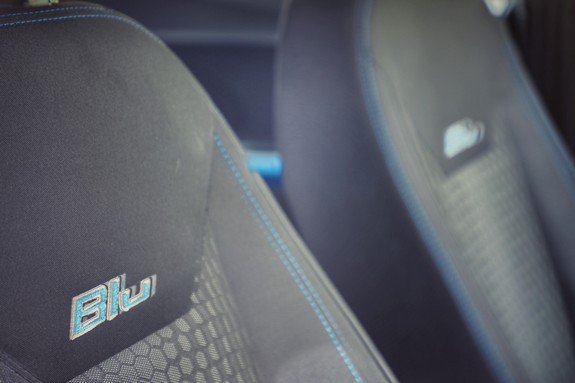 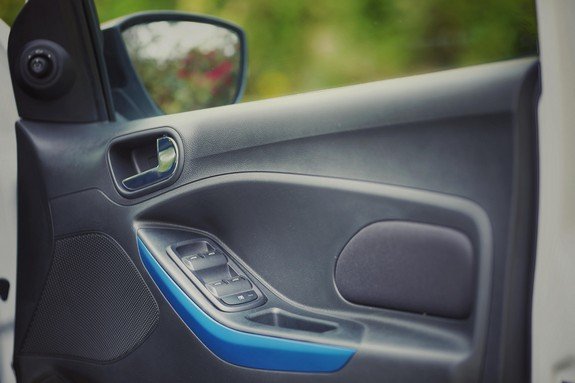 Unless you opt for the higher variants, the general cabin design of the new 2019 Figo sees subtle changes inside but again, the layman could be be forgiven for not spotting them immediately. It is the of course, the updated dashboard. The new layout is now finished in piano black and does its best in classing up the atmosphere. What does see change is the addition of features on offer, particularly the new infotainment system. The new Figo now gets a new 7-inch touchscreen Fly-sourced infotainment unit. There is no Android Auto or Apple CarPlay on offer, neither is it nearly as intuitive and lag-free to use as the brilliant SYNC 3 system that is offered in the Freestyle or the Aspire. We feel the feature should have at least found its way into similarly-priced Titanium Blu variant. However, it isn’t all bad as what you do get from the system is bundled navigation, a more upmarket cabin feel and feel-good factor as compared to the outgoing version. And let’s be honest, that’s what majority of the car buyers will be looking for from their premium hatchback anyway. Another useful feature which the new Figo now gets is automatic headlamps, for when you have reached the level of lazy where you refuse to be disconcerted any further by the vexation of pitiful knobs and switch. Switch to automatic and leave it there forever, if you please. However, I’ll be the first to admit that they can be a lifesaver entering underground parking lots in the middle of the afternoon. So, those are the changes that one will find in the new 2019 Ford Figo in terms of design and features. However, what makes the Figo, a Figo, is its ability to be the raunchy devil once you let the mechanicals get on with their bit. And a lot has changed in that aspect. Along with the familiar 1.5-litre diesel engine from the old model, the 2019 model sees the addition of two new Dragon series three-cylinder petrol engines, namely the 1.2-litre Ti-VCT and the 1.5-litre Ti-VCT units. Keen Ford fans will also know that these are the same engines which customers were first introduced to in the Freestyle and then the Aspire. It is now baby brother Figo’s turn and boy does this combination have the secret recipe. With that said, the two transmission options available are a Getrag-sourced six-speed manual only paired to the 1.2-litre unit, and a six-speed automatic torque converted specifically paired with the 1.5-litre unit. The former is tuned to deliver 96bhp and 120Nm of torque, while the latter bumps those figures up to 100bhp and 215Nm of torque. At the first-drive event, we were only able to get our hands on the 1.2-litre petrol and 1.5-litre diesel engines to sample the performance, we will be bringing you a thorough review of the Figo paired to the new 1.5-litre Dragon engine in coming weeks. In our opinion, the strength of these super capable Dragon engines really shine brightest, married to the Figo. Starting with the 1.2-litre Dragon unit, which just happens to be the most powerful naturally aspirated engine in its class. Combine that to the Figo, and you get the most powerful hatchback in the class. Ford engineers have tuned the engine for better low-end and mid-end push, and that’s where the car comes into its own. Although it has an initial hiccup below the 2,000rpm mark, push that barrier and that is where the power comes in quick and easy. The new manual transmission also has a very positive shift action, with a satisfying mechanical clunk at the end of every jerk. There is a downside to all this fun though and that, the number of extra shifts required in the dreaded stop-go traffic. Break free of that and the car will charm its way into your hearts all the way to roughly 5,700 rpm. In terms of refinement, the engines felt quite refined when we sampled it with the Aspire and things haven’t budged much from them. The engine is still a smooth unit but only a closer inspection reveals its slightly noticeable gruff side when pushing past the 4,000rpm mark. While there is plenty of fun to be had with all the grunt that this motor has to offer, be gentle and it is capable of even returning a respectable ARAI rated fuel-efficiency of 20.4kmpl. We predict we never came close to this figure seeing as how much fun we had during the shoot but we assure you, readers, it was all in the name of journalistic ethics.

Switching from the 1.2-litre petrol to the 1.5-litre diesel, proved just how capable that oil burner unit really is. Power is instantaneous once you cross the 1,500 rpm mark  to let the turbo spool up and it's all smiles from there as the motor feels like it wants to keep pushing, full-steam ahead. What has also helped in the overall drive feel, is the noticeable lightness in the clutch action compared to the previous unit. It was definitely a pleasure to use in our time hammering through the gears on tight, winding roads and stuck in the inevitable, bumper-to-bumper traffic conditions of urban cities. Another aspect of what makes the Figo a worthy option is its balance between ride and handling. As for the 2019 model, it hasn’t lost any fizz compensating for the extra niceties that it now offers. The ride is still very sure-footed and very nimble. While there is only so much it can do with the power on tap, the other half of the Figo is pure mechanical grip. Agreed, the previous generation felt rawer, yet the new one doesn’t disappoint. However, while the firm damping is tuned to accommodate the larger 15-inch hardware and helps in high-speed stability and minimal body roll, expect some nasty thuds over unusually large potholes. This is India after all and there is only so much that the company can predict and tune accordingly. Overall, we still feel the new Figo hits all the right spots of heart when the going gets fast and twisty. All-in-all the 2019 Ford Figo is now truly in its latest iteration, following all changes that match those of its international cousin, the Euro-spec Ford Ka+. For us, changes to the new Figo are substantial enough to justify this mid-life facelift, bringing the Figo at par with its competition. However, we have saved the two best changes for last. It’s of course that the new Figo has actually undercut its own price tag by Rs 67,000 and is now being offered with a mind-easing standard warranty of 5-years/1,00,000km. This is the similar tactic we saw on the new Endeavour and now made its way to Figo. We would just like to tell the people at Ford HQ that, we have stood up and taken noticed. With slashed prices, better looks, more powerful engines and better features - the Figo has just crept up to the top of our premium hatchback books.

Official images of the updated Figo – the fun to drive a family car are now just one mouse click away and detailed enough to help us gain better insights into this new car.

Ford Figo, Aspire, and Freestyle have received some changes regarding their variant line-ups. The prices of these models are also updated. Read the detailed report here.

Ford has discontinued most of the lower trim levels of its three best selling models - the Figo, Aspire and Freestyle. They'll be available in just two or three variants now. Full story below.