Over the last few years, the crossovers and SUVs segment has been witnessing an exponential sales growth, not only in India but also across the globe. As reported by Ford Motor, about one in every four buyers in India seeks for an SUV. The American carmaker has already been selling a very popular Ford Ecosport in the Indian lineup though, the company still showed an insatiable desire for another product positioned well below the Ecosport with smaller sizes, different styles but quite an equal prowess. There it came, the Ford Freestyle. According to Ford, the all-new Ford Freestyle is an exciting engineering masterpiece. The Ford Freestyle comes out as a flawless fruit merging the compactness of the hatchback with the sportiness of SUV body styles. The Compact Utility Vehicle (CUV), as marketed by Ford, has been developed on the Figo elder sibling, but that’s just a half of the story. There’s a lot more to talk about this special hatchback-crossover by Ford as I’ve discovered after the first drive. Let’s find out how Ford manages to shake up the cross-hatch space in our 2018 Ford Freestyle Test Drive Review Visually, the 2018 Ford Freestyle gets huge inspirations from the SUV's design elements, as seen in many other crossovers in the market. Besides, it takes a handful of design cues from the donor model, Ford Figo, too. Back in 2018, ahead of its launch, there were a bunch of speculations telling that the Ford Freestyle would be nothing more than a hopped-up version of Ford Figo sibling or says, a Figo dressed up as a sport utility vehicle. However, during the course of its introduction, Ford told us quite a different story.

While the front end of the Freestyle looks quite similar to that of the Figo counterpart, the distinctions can be easily noticed when looking at the detailing of the headlamps. When putting these two cars at the same place, the new Freestyle puts on distinctive front and rear bumpers finished in black with C-shape surrounds which house a pair of circular fog lamps units. The front mesh grille, on the other hand, also looks fairly intricate with all-black finishes that complement the ruggedness of the exterior in effect. There’re also a bunch of differences on the side and rear profiles of the Freestyle due to the inclusion of revised tail lamps with altered graphics and a set of new 15-inch alloy wheels shod with 185/60-section tyres. Considering the Figo’s 14-inch alloys with 175/60-section tyres, the Freestyle seems to be much superior. However, its tyres are still considerably narrower than the 195/55 R15 alloys unit mounted on the Figo Sports. 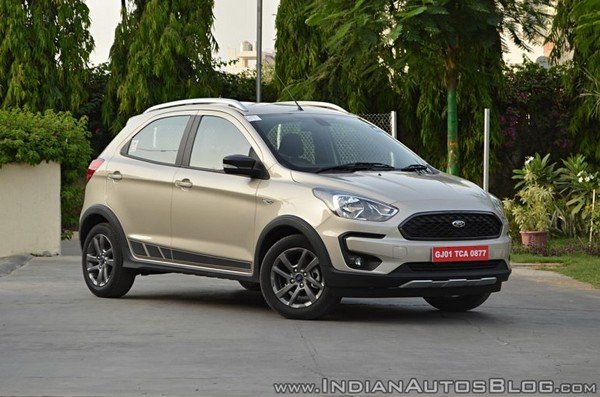 The hefty use of black body cladding stretching all around from the front bumper, across the wheel arches to the rear end makes the car look sportier and chunkier by an extent. Whereas, both ends sports faux silver skid plates that add to the overall premium appeal of the cross-hatch. The roof rails appear across all grades of the Freestyle and they’re not ornamental merely. The ones found on the Freestyle Titanium and Titanium (O) grades are all finished in silver and can be functional to raise up to 50 kg of load. With the unladen ground clearance at 190 mm, the all-new Ford Freestyle rides higher than the Ford Figo by 16 mm. Heavy changes have been made under the Freestyle’s skin as well since the chassis has been meticulously revised that helps the car sit on a wider footprint as against the Figo sibling, albeit sharing the similar wheelbase. Overall, the Ford Freestyle carries a bit of new cosmetic characters and looks bolder than the normal hatchback.

Generally speaking, the Ford Freestyle shares the same cabin with the donor Ford Figo hatchback. However, it still manages to lift the mood on the inside by a range of essential done-ups. The old-school button-rich readout has been removed making room for a sleeker floating 6.5-inch infotainment touchscreen which is the best in its class. It helps increase the elegance of the centre console and replace the cluttered appearance of the Figo’s unit. Functionally, the 6.5-inch touchscreen on the Freestyle is on par with many new-age premium smartphones in terms of display quality and responsiveness. It supports Android Auto, Apple CarPlay, WiFi hotspot and is compatible with Ford’s SYNC3 for range-topping Titanium+ variant.

The American manufacturer has brought on chocolate and dark finish for the Freestyle’s dashboard which has, in effect, lent the cabin a sportier feel. In the meantime, the AC controls, instrument panel, steering wheel, and gear shift knob among others have been massively inspired by those of the Figo twins. The fabric seat upholstery dons brown and black cloaks that also complements the dash well. Some further adds-on like new all-weather rubber mats clinch a sense of ruggedness but of course, can slightly jack up the costs. 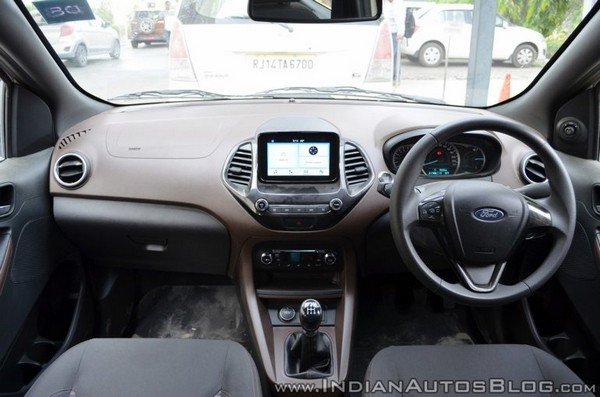 Like the Ford Figo, the interior space of the Freestyle, especially at the rear, is just about adequate and the same goes for the luggage bay. Though the rear seat has witnessed some overhauls for more convenience and comforts, the non-adjustable rear headrest and the devoid of storage pockets on the rear doors are to name a few discouragements inside the Freestyle’s cabin. As the cabin space is identical to that of the Figo hatchback, sitting at the rear seats of the Freestyle is a bit tight. 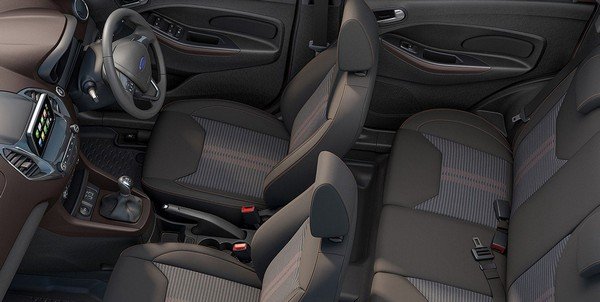 The front passengers, in contrast, can enjoy the convenience of larger headroom, a rubberized storage unit under the AC controls, generous glove box and door pockets to swallow bottles along with some other knick-knacks. However, the lack of adjustment for the steering wheel and the absence of armrest for drivers are to name some that we expect more. As I’ve said earlier, the boot capacity of the Ford Freestyle remains the same as the Figo at 257 litres.

On the safety front, the Titanium and Titanium+ grades of the Ford Freestyle get electronic stability programme, hill-hold assist and traction control which are parts of the anti-rollover protection (ARP) package. This  ARP system can send a command to apply the brakes on every single wheel and cut down the engine torque when it finds any possible roll-over cases. These features are also available on the Ford Figo and Aspire, but for the petrol AT variants only.

To tell the truth, we're glad to see the American auto major joining the playground of safety. With the infusion of 6 airbags (dual front airbags are standard across variants) on the Ford Freestyle, Ford is the only one mass-market automaker in our country to offer 6 airbags across its entire model ranges.

The new Ford Freestyle comes to debut the second member of Ford’s Dragon family. It employs a 1.2-litre 3-cylinder petrol motor which, as you can see, shares the same engine block with the facelifted Ecosport’s 1.5-litre unit. This mill is coupled with a fresh 5-speed manual transmission hailing from Getrag. This engine makes 96 PS of max power at 6,500 rpm along with a peak torque of 120 Nm at 4,250 rpm which appears to be ampler than for a car of this size, at least on paper. From the very word go, the new “Dragon” offers a far better driving experience as compared to the outgoing 4-cylinder unit. In fact, the latter sounds lazier and a tad sluggish alongside the roads that have been by all ways phased out on the new punchy one. Even with three cylinders, oh yes, an odd number, it is normal to get some vibrations, as any regular equivalent version does. Thankfully, the Freestyle’s second engine from the family of Dragon does not have any, despite the fact that it misses on a balancer shaft. In some cold start, this mill can produce some vibrations if any, but above all, the performance is fairly smooth and somehow I enjoy the sound that this three-pot engine made. Revving hard before releasing fully the clutch or levering down to the first gear is also more comfortable with the Freestyle petrol. But there is, from time to time, unhappiness expressed by the engine in the second gear at low rpm. The Freestyle is also offered with a 1.5-litre TDCi 4-cylinder diesel engine which is seen on the Figo, Ecosport and Aspire as well. This oil burner develops the maximum power of 100 PS at 3,750 rpm and the max torque of 215 Nm at 1,750-3,000 rpm. Powers are sent to the front wheels via a 5-speed manual gearbox, marking the Freestyle as the only model in Ford’s line-up to feature this new manual transmission.

Personally speaking, this engine is more likely to deliver the best-in-class ride performance and returns respectable figures regarding the fuel consumption stakes. Ford has claimed that the diesel variant of Freestyle boasts a fuel mileage of 24.4 kmpl overall. The petrol engine, on the other hand, is claimed to have a fuel mileage of 19 kmpl. These are figures on paper, and for some cars, the real-time figures might be off by 8-9 kmpl but that’s not the case for the Freestyle. It took long driving around the city in an aggressive manoeuver to bring down the number to around 11.2 kmpl, so I think, the real-world fuel mileage figures of the Freestyle should be much closer to the claimed ones when the car is driven in gentle mode. Sitting at 16 mm higher than the Ford Figo, the Ford Freestyle has its suspension setup and the anti-roll bar stiffened up in order to keep it stable regardless of the relatively high centre of gravity. The aforementioned wider track also helps enhance the stability and the betterment of cornering. That said, the car’s lean and body roll are well controlled accordingly. In the case of driving off the bad undulations at a triple-digit speed, the Freestyle really excels in maintaining its composure at all. The suspension does its good job of handling all bumps and ensure stable manners over the rough patches. Understanding the Indian buyers’ tastes and likeness, Ford has made the steering lighter and easier to use at lower speeds. Note that the steering can transition into a relatively well-weighted version when needed. The front disc brakes and drums at the rear undertake the braking duties so well, even during the dynamic driving or unpleasant traffic. And after all, the new engine-transmission combination, as said earlier, rolls out so much better experience than the older setup. Quite frankly, Ford has put much effort into the Freestyle which is apparently a viable option to take on the Maruti Ignis, Hyundai i20 Active, Mahindra KUV100 and more.

The Ford Freestyle has been on sale in India at the price range of around Rs 5.09 Lakh and 6.09 Lakh (ex-showroom, pan-India). At this price mark, the Ford Freestyle is actually an impressive and compelling package. It is more affordable than the base petrol and diesel trims of the Ford Figo by around Rs 40,000. In fact, at this price range, the new Freestyle can even compete aggressively against its rivals in the segment, not to mention its incredible ride quality. If you are in need of a fun-to-drive yet value-to-the-money vehicle and do not want to concern about ironing out the bad roads, then the 2018 Ford Freestyle is a tempting one.

Visit our New Cars page for more information and updates about the upcoming cars and the out-going car models.