2018 Honda Amaze vs Ford Freestyle: Which one is better?

Ford Freestyle 2018 is packed with more features and effective powertrain. On the other hand, Honda Amaze, a sedan from Honda, has come back and succeeded with their new package. Which one will offer the better option for you?

Given that they belong to different categories, there are substantial differences in their size. The Ford Freestyle is larger in most dimension, like the length and the width. Moreover, as the cross is supposed to be more off-road capable, the Freestyle sports a higher ground clearance and the better. But when it comes to the length, the Amaze is the winner here. But the Amaze’s wheelbase is short than the Freestyle.

In terms of the boot space, it is the Honda Amaze that scores higher. It has a large cargo space of 430 litres while the Ford Freestyle’s boot only measures at 257 litres. With such a huge space for the storage, the Amaze edges out not only the Ford Freestyle but most of the car of its segment.

As mentioned above, the Amaze is a sedan which looks more harmonious with the city traffic scene, while the Freestyle is a crossover, and more likely to come handy outside the city. And their design reflects its intended purpose: the Amaze looks smarts and stylish while the Ford Freestyle is more sporty and offroader-like.

Exteriorly, the Amaze comes with a mature design. On the front face, it still houses the thick chrome strip with a Honda badge in the middle and flanked by the two headlights. Underneath is the wide air dam with two plastic-cladding fog lights. Everything on the front face is of a considerable size, giving it an impressive road presence. But coming to the side and rear, the Amaze is not particularly outstanding. On the other hand, the Ford Freestyle focuses on the sporty look. It is equipped with roof rail, body plastic cladding and tall stance, creating the strong and bold look unique to the crossover. Ford Freestyle has the sporty look with many offroader characteristics

Generally, the Amaze and Freestyle are of two different styles. If you are more into the sporty and offroader look, it is the Freestyle that will fit your taste. Whereas an Amaze will give you the impression of maturity and stability.

The Amaze will offer more legroom and knee room inside the cabin. But as the Freestyle is wider, it follows that the cross comes with a better shoulder room. But in general, the Amaze is the real winner in terms of interior space. Honda Amaze really knows how to optimize their dimensions for a high practicality. It has always been considered as one of the most spacious cars in its class, and this trait has been inherited to the 2018 version. The Freestyle, even it has a better overall dimension, could not bring in real-life roominess. Sadly, Ford Freestyle could not realize the large dimension into a roomier cabin

Inside the Ford Freestyle, the cabin gets a dark theme colour making of brown and black. On the other hand, the Amaze is brightened up by the beige and black colour scheme. And the Amaze gets some premium touch like the piano black panel on the dashboard and the digital AC controls panel. Everything of the interior gives you the impression of an elegant and premiumess which could only find in the higher-priced car. On the other hand, the Ford Freestyle’s dashboard is simplified with minimal design. It comes as lack of characteristic when compared with the Amaze. Honda Amaze gets all glossy touch like the black piano element Both of the petrol and diesel engine are available on the Amaze and the Ford Freestyle. Now, we will compare the paper specifications of each fuel type engine:

Getting the same displacement, however, the Freestyle manages to engage more power output than the Amaze. The 1.2-litre unit on the Freestyle is claimed to make the peak power of 96Ps and the torque of 120Nm. On the other hand, the Amaze is able to crank out 90PS and 110Nm. But one advantage that only the Amaze could offer is the CVT engine option. The Amaze comes with either five-speed manual gearbox or a CVT option packed with paddle shifter. In terms of fuel efficiency, Freestyle and Amaze is quite compatible as the Amaze provides a mileage of 19,5kmpl which is marginally higher than the Freestyle. Honda Amaze petrol comes with both manual and CVT transmission

Once again the Freestyle and Amaze getting the same fuel displace of 1.5 litre. But this time, the Amaze irons out the power output gap. Both of the engines are able to pull out 100PS. But the Freestyle gets ahead with a higher toque. The transmission option remains the same.

In terms of fuel efficiency, the Amaze is well ahead of the Amaze with the mileage of 27.4kmplk for the manual version and 23.8 for the CVT version while the Freestyle could return 24.4kmpl.

To have a fair comparison between the two cars, we will pull out the pairs of variants with close prices.

Both Freestyle Trend and Amaze E are equipped with a well-equipped safety list. However, the Freestyle Trend has more to offer with more convenience and comfort features, especially with premium offers like touchscreen infotainment system with a rearview camera and keyless entry. These goodies come at the price of 40,000 and 30,000 over the Amaze E for petrol and diesel version, respectively. At the price of Rs 5.99 lakh (petrol) and Rs 6.99 lakh (diesel), the Freestyle offers touchscreen along with other goodies

At this price pair, the Freestyle turns out to be the cheaper. Freestyle Titanium diesel is Rs 24,000 cheaper and the petrol is Rs 10,000 cheaper while it still remains a richer feature list than the Amaze S. This has virtually made the Freestyle more compelling option.

The top-spec Freestyle edges out the Amaze V with its fully-loaded package, and most importantly, at a more affordable price than the Amaze variant. 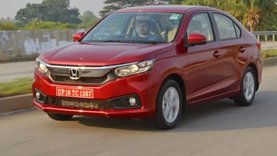