Tata Altroz vs Tata Tiago Comparison: Which Is Better To Buy?

Tata has just launched the all-new Altroz premium hatch and the updated Tiago in the Indian market. Read along our detailed comparison of Tata Altoz vs Tata Tiago to know what these cars have in common and what are the difference between the two.
Table of Contents
Table of Contents

Tata Altroz is Tata's first premium hatchback, and a highly-awaited one at that! Along with the Nexon and Tiago facelift, Tata Motors has made the highly-anticipated Altroz available in the market at the price starting from Rs 5.29 Lakh, making it one of the most aggressively-styled and –priced in the premium hatchback segment. However, the Tata Altroz is not the only hatchback in the company’s lineup of hatchback cars. Slotted below the new Altroz is the Tata Tiago which has created quite some milestones in the success storybook of the home-grown carmaker in India.

Launched alongside the Altroz, the Tiago facelift gets some hype around it thanks to a batch of changes made to the small hatchback car compared to the outgoing vehicle. The Tata Tiago now looks fresh and young with a host of design cues inspired by the Altroz. People want to know what are the similarities or differences between these cars and for that reason, IndianAuto works on the Tata Altroz vs Tata Tiago comparison to find out what they have in common and what they have to differentiate from each other.

Tata Altroz vs Tata Tiago Dimensions: Which Is Bigger?

As far as the dimensions go, the Tata Tiago is smaller than the Altroz by a margin, that is understandable because the Tiago sources from the A2-segment hatchback while the Altroz is a new B2-segment car that rivals the Baleno and Hyundai Elite i20. See how the 2020 Tata Tiago sizes up against the Tata Altroz in the table below:

Tata Altroz vs Tata Tiago Design: Which Is Better Looking?

At the time of launch, the Tata Altroz and Tata Tiago may trick the show-goers and auto enthusiasts with their similar faces at the first glimpse. The new Tiago is updated to resemble the Altroz with the signature blacked-out smiling front grille along with horizontal slats at the lower part. However, we can find out a host of design cues to differentiate the Tiago vs the Altroz by looking at those vehicles carefully. Despite having quite the same Indica-inspired smiling grille, the Tiago features a sleek tri-arrow motif on its piano black front grille flanked by a set of headlamps with projector units; meanwhile, the Altroz comes with blacked-out honeycomb mesh grille instead. The headlamps of the Altroz looks sharper and more premium and the same goes for its fog lamps housing.

Both the Tata Tiago and Tata Altroz comes with contrast black roof, thereby giving them a more modern value. The Tiago offers a set of R15 dual-tone diamond-cut alloy wheels. The Tata Altroz is available with R16 laser-cut dual-tone units. The side profile of the Tata Altroz looks agiler and sportier compared to the Tiago with prominent beltlines and C-pillar mounted rear door handles, a reminiscent of the Swift’s units. The Tiago, on the other hand, goes for a conventional way at the sides with regular side character lines and door handles. At the rear, both Altroz and Tiago feature a sporty rear spoiler that not only adds more to their sportiness appeal but also help reduce drag and increase the fuel efficiency stakes. The boomerang-shaped taillights of the Tiago look cool and complements the trendy look of the car at the rear. However, the new signature split tail lamps of the Altroz makes the car look far more aggressive. What is more interesting about the Tata Altroz is the 90-degree opening doors that not only looks enticing but also enables an abundance of space for people getting in and out.

Inside the cabin, it does not take much time to find how these Tata hatchback cars are more or less similar in their interiors. Tata Motors has made great efforts to enhance the design and premium quotient of the Tiago which can be seen clearly on the inside of the hatchback. Tata Altroz, in the meantime, has everything on points for a B2-segment hatchback with a very premium cabin replete with many modern touches. 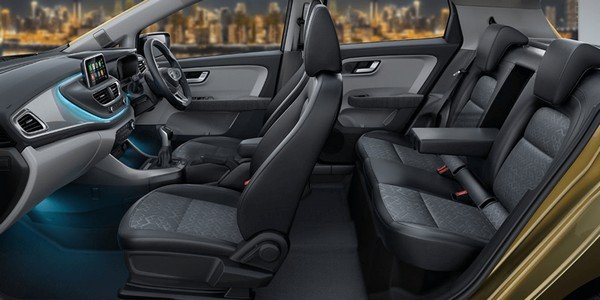 2020 Tata Tiago features an elegantly-designed dual-tone dashboard with tri-arrow designed dual-tone seat fabric, enhancing the upmarket feel on the inside of the car to a certain level. We can still see the orange colour-coded bits around but a new flat-bottom steering wheel with mounted controls is on board.

Tata Altroz is more distinctive with a floating-island dashboard layout that offers a big free-standing touchscreen infotainment system and serene blue ambient lighting surround the dash, all the ways to brighten up the mood on the go, especially at night. As stated earlier, the Tata Altroz comes with more modern touches such as classic satin chrome embellishments on the dash, leather-wrapped gear knob, metal-finished inside door handles and more.

Tata Altroz vs Tata Tiago Features: Which Is Safer and More Convenient?

To penetrate into the premium hatchback segment, Tata Motors packs the Altroz to the gills with many features to make it convenient and comfortable to stay with. As stated above, the Altroz features 90 degree opening doors for a larger space for passengers to get in and out of the vehicle. 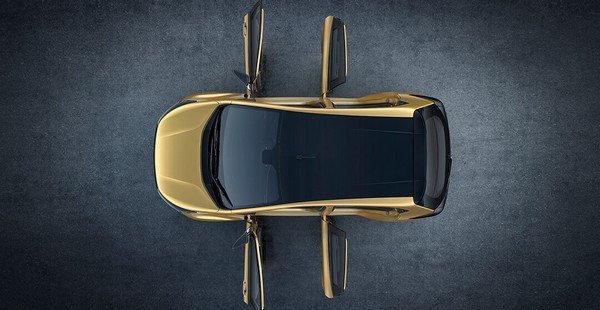 Of course, being a B2-segment car, the Altroz has a handful of features over the A2-segment Tiago hatchback. It is available with wearable keyband, rain-sensing wipers, cornering lamps and auto headlamps, anti-glare IRVM, cruise control, voice assist, engine start push-button, which are given a miss on the new Tiago. 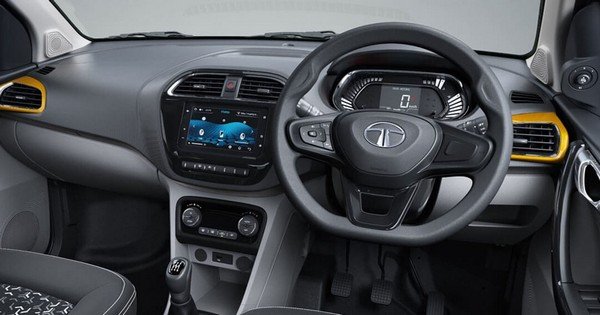 Standing lower than the Altroz in the company’s portfolio, the Tata Tiago endears itself with major features such as a 7.0-inch ConnectNext Touchscreen infotainment system by Harman that supports Android Auto and Apple CarPlay, 8-speaker Harman sound system for the range-topping variants. Besides, automatic temperature control, manual aircon with heater, tilt steering, 7-speed front wipers, integrated rear neck rest, tinted windows and tailgate glass along with adjustable front headrest are standard comfort goodies in the vehicle. What the Tata Altroz vs Tata Tiago have in common in terms of features is that both the base XE trims of the two cars miss out on a touchscreen for the infotainment system. 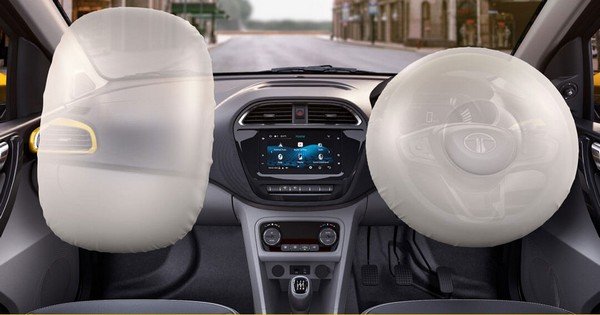 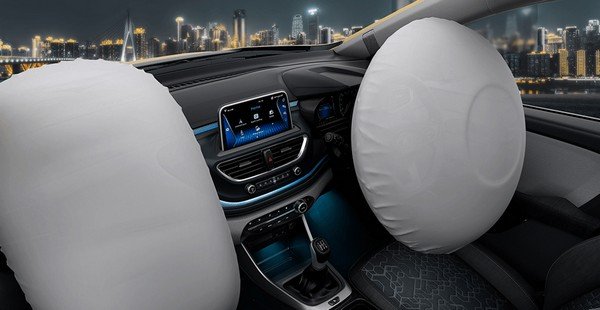 Tata Altroz vs Tata Tiago Engine Specs: Which Has A Better Performance?

Both Tata Altroz and Tata Tiago share a same 1.2-litre Revotron petrol engine option that is compliant to the stricter BSVI emission standards. The power and torque output figures are completely the same, with 86 PS of max power at 6000 rpm and 113 Nm of torque at 3300 rpm. 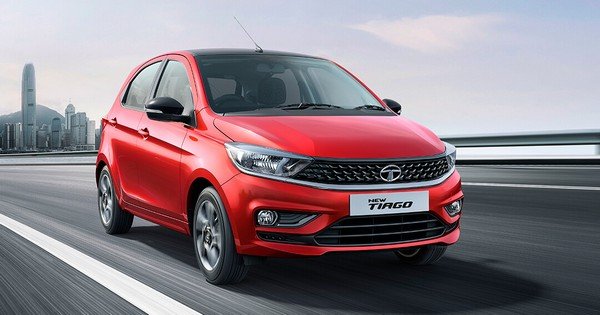 Tata has pulled the plug on the diesel models of the Tata Tiago facelift due to its high expense to upgrade it to the BSVI norms. As a result, the 2020 Tata Tiago is now available with a single petrol mill. Whereas the Tata Altroz comes up with a powerful 1.5-litre turbocharged diesel motor sourced from the Tata Nexon, making 90 PS of power and 200 Nm of peak torque. This mill still come paired with a 5-speed manual transmission only.

Tata Tiago Petrol has a higher ARAI-rated fuel mileage figure compared to the equivalent Tata Altroz model. That said, the new Tiago delivers a fuel economy rating of 19.8 kmpl that is slightly higher than the Altroz’s 19.05 kmpl.

The Tata Altroz diesel is the more fuel-efficient car, as can be seen in the above table. The ARAI-certified fuel efficiency figure of the diesel Altroz is at 25.11 kmpl.

Tata Altroz vs Tata Tiago Price: Which Is Cheaper?

Despite being quite pricier than the Tiago facelift, the Tata Altroz is still one of the most competitively-priced offerings in its own category. It easily undercuts the likes of Maruti Baleno and Hyundai Elite i20 with its surprisingly attractive price point. Whereas, in the A2 segment itself, the Tiago is now the most expensive hatchback car that is essential Rs 5,000 – 35,000 costlier than the Hyundai Santro.

Tata Altroz is competing aggressively with the likes of Maruti Baleno, Hyundai Elite i20, Honda Jazz and Toyota Glanza in the competition of premium hatches. Comparisons on these cars are coming soon!

Tata Tiago stacks up against the likes of Hyundai Santro, Maruti Celerio, Maruti WagonR and Datsun Go in the segment. We also compare the 2020 Tata Tiago with old model for your information.

Tata Altroz vs Tata Tiago Verdict: Which Model Is Worth Buying?

In our review of Tata Altroz, we are expecting that the all-new Tata car will ramp up the competition with its stylish design, convincing features and competitive pricing. We can conclude that the Tata Altroz offers some huge advantages over the Tata Tiago in many aspects like bolder look, bigger sizes and spaces, safer and more features. However, the Tiago could please you if you are in need of an automatic option and can’t wait for the launch of petrol-automatic Altroz. Therefore, it’s up to you and your budget to choose which one is worth buying.

Hopefully, our Tata Altroz vs Tata Tiago comparison could ease your keen nose for a detailed comparison. To compare more cars with precise details and objective assessments on vehicles, kindly stay updated with IndianAuto. We also provide you with a range of articles on Tata cars compared with other models in and outside their categories. 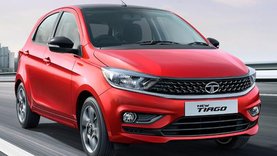