Our spec sheet comparison of the Maruti Suzuki S-Presso and Mahindra KUV100 pits the two against each other in terms of engine specifications, design, comfort, and pricing. Check out which of the two is a better car.

The Maruti S-Presso is one of most awaited Maruti Suzuki products in a long time. Test mules are being spotted left and right, spy pictures are making the rounds on the internet, everybody is dissecting the spec-sheets, etc. The hype for the new ‘Micro-SUV’ is definitely high. The S-Presso, however, is not a new concept. Mahindra has had a similar car for a few years now, the KUV100. Of course, the two cars have a lot of differences as well, but the similarities warrant a detailed comparison. So, here we have a detailed comparison between the upcoming Maruti S-Presso and the Mahindra KUV100. First, we have the Maruti S-Presso. It has a simple, straightforward design. The face has little hints of aggression, the side-profile is rather bland, and the rear is sweet and simple. The Baleno-esque tail lights are pretty, but the headlights could have been better. Personally, the Future-S concept, on which the S-Presso is based, had a much better headlamps. To be completely honest, it just fails to catch the appreciation of the onlookers. On the other hand, the Mahindra KUV has a very polarising design. Opinions on its looks range from “It looks wonderful” to “It’s hideous”, covering everything in between as well. That may be because the KUV is a slightly awkward amalgamation of brilliant design details. The headlamps, which resemble Land Rover Evoque, are sharp and sleek, but the rear has a conservative design, flat and stubby. The side-profile is a bit chubby. The car is tall, with high roof and low floor, but the length is too small in comparison. The wheels also look tiny compared to the huge body. The plastic cladding on the wheel arches and side-skirts help add some muscle.

The Maruti S-Presso may be a crossover, but it still is a really small car. It’s based on Suzuki’s extremely versatile Heartect platform, which is extremely light yet strong. The S-Presso weighs just 726 Kilos, which is even less than some hatchbacks!

It would take just a single glance to know that Mahindra KUV100 is the bigger car here. It is substantially taller and wider, slightly longer, and has a lower ground clearance as well. As for the weight, Mahindra has managed to keep it well under check, and the KUV tips the scale at just over a tonne. 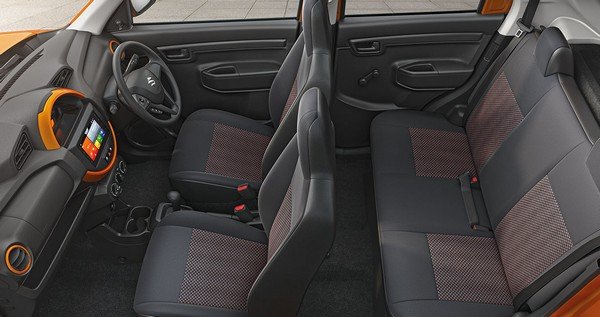 The interiors of the S-Presso are quite unique. The instrument console, for example, is located in the centre, instead of being in front of the driver. Underneath that we have the 7-inch touchscreen infotainment screen. The infotainment system is expected to be the same SmartPlay Studio system as on the new Wagon R. It is neatly surrounded by metal-like arch above and below. The AC vents are smartly placed, and the splattering colour all-around makes the cabin feel lively. In contrast, the KUV100 has a very utilitarian cabin, but it manages to look very upmarket. The dashboard is simple, with piano black inserts thrown in for good measure. Although instrument console is traditionally mounted, i.e., in behind the steering wheel, there are some unique design elements in the KUV as well. It gets a Joystick-type gear-lever mounted in the centre-console. Even the handbrake is dash-mounted! The centre console also consists of a 7-inch touchscreen infotainment system, and you get armrests for both the front and rear passengers, which is an extremely practical touch.

Because of its tiny dimensions, the S-Presso can only fit four people. You can try to seat five, but unless your rear passengers are small children, it simply won’t work. The boot space isn’t yet known, but it wouldn’t be a lot, considering just how compact the car is.

On the opposite side, the KUV offers lots and lots of space inside. The dash-mounted gear-lever and hand-brake free the floor space, and thus you can seat three passengers in the front-row! When you don’t want the extra front seat, you can fold it forward to create a gigantic arm-rest instead! The seating capacity, thus, becomes six people, including the driver! Practically though, you can only seat five people, two in the front and two in the back. The extra front seat should only be used for an emergency, as it’s not spacious enough. Still, because it is more spacious, the KUV100 wins this round.

It’s hard to comment on the safety features of the Maruti S-Presso before launch, but the company states that the car will get more than 10 safety features. While the statement is quite ambiguous, we hope safety isn’t neglected to keep the cost down. The S-Presso will feature just one engine option, a 1.0-litre three cylinder unit. It churns out 67 bhp and 90 Nm of peak power and torque, which although isn’t much, would be fine on the lightweight Maruti Micro-SUV. Reports have also confirmed that a 5-speed AMT will be optional, while a 5-speed manual will come standard. The KUV has two engine options, a petrol and a diesel. Both are 1.2-litre 3-cylinder units. The petrol engine makes 82 bhp and 115 Nm, while the diesel makes 77 bhp and 190 Nm. While the engines are more powerful than the S-Presso, the 300 Kg extra mass hurts the performance and fuel-economy numbers. There is just a 5-speed manual on offer, sadly, without any automatic option. One advantage that the KUV has is the engine refinement. Even on the diesel variants, NVH levels are quite low. In comparison, a Maruti diesel get noisy under heavy acceleration, with lots of engine clatter entering the cabin.

When you look at the pricing, you’ll notice that these two aren’t evenly matched. The S-Presso is the cheaper car here, and although official prices aren’t out, we expect it to be priced between ₹ 3.5-5 lakh (ex-showroom). The KUV is the more expensive option, beginning at ₹4.88 lakh for the petrol, going all the way up to 7.01 lakh. The diesel variants are even more expensive, priced between ₹5.9 - 7.94 lakh.

After looking at the pricing, we can understand both these cars better, especially the Maruti. The reason the S-Presso is smaller and less spacious, is because its built to fit a budget. It is lighter and has a smaller engine so that people who bought it on a budget can run it on a budget. This is what the S-Presso is, it’s a car that aims to be affordable.

On the other hand, the KUV follows an entirely different philosophy. It offers you more space than plenty, and tries to impress you with both its interior and exterior design. The engines are powerful and frugal, but not exceptionally so. The heavier weight negates any power advantage, and the fuel economy is lower.

To pick a winner, we’d have to go with the KUV. It is a better product overall, and while you end up paying more money for it, you do get a lot more for your money’s worth. Still, the S-Presso is a great car for what it’s worth, and it’s worth much less than the little Mahindra. Just look at it this way; between the two, Maruti S-Presso is the cheaper option and Mahindra KUV100 is the better option. 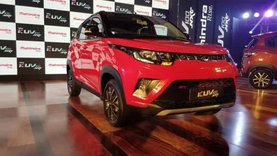