10 Things You Need To Know About The Tata Buzzard

The Tata Buzzard (seven-seater Harrier) will hit the Indian roads in late 2019. Read on to get a deep insight into the upcoming India-spec Tata Buzzard SUV.

Recently, the seven-seater Tata Harrier, called Buzzard, has marked its debut at the pavilion of Tata Motors at the 89th Geneva International Motor Show. The brand new Buzzard will join the Harrier five-seater on extending Tata Motors portfolio when it enters the Indian market by the end of this calendar year. Now that the Buzzard is the talk of the town these days, we work out 10 things that you should know about India’s car major’s latest premium SUV. "Buzzard" Won’t Be the Name

Of the important things to know about the new Tata Buzzard, the first and foremost thing to concern about the car is its name. As stated by the auto manufacturer, the name Buzzard will not make it to the Indian market and might be used in the European marker exclusively. That said, the company will invent a more India-like name for the 7-seater of Harrier when it’s launched.

A big and badass SUV

It is remarkable that the Tata Buzzard shares the width of 2,741 mm and wheelbase of 1,894 mm with the Harrier sibling. Nevertheless, the big new SUV gets a 63 mm longer and 80 mm higher than the five-seater counterpart that is very advantageous for a more imposing silhouette and plenty of roominess.

Although the seven-seater Buzzard joins with its base Harrier model on the OMEGA platform and the same 2.0-litre Kryotec engine, the model still sits at a higher state of tune. The Fiat-sourced Kryotec motor when fitted in the Tata Buzzard comes to discharge the max power of 170 bhp and 350 Nm torque which is a 48 bhp way more powerful than the Harrier. The updated diesel motor of the seven-seat SUV will be named as “Kryotec170”.

The 2019 Tata Buzzard shows a largely identical look as the Harrier until the C-pillar. The rear-end fascia of the bigger SUV features a longer overhang leading to the aforementioned increase in overall length of the model. A redesigned bumper with revamped round taillights, a bigger windscreen along with new boot lid completely blows a fresher air in the aesthetics of the sports utility vehicle. While the smaller Harrier SUV is limited to a 6-speed manual gearbox only, the transmission package of the Buzzard is more accessible with a 6-speed MT and a Hyundai-sourced 6-speed torque converter automatic transmission. Also, reports suggested that the later unit will make its presence on the 5-seater Tata Harrier at a later time.

On gazing at an all-wheel-drive system on the Harrier, Tata Motors is conscious of a scenario where there is a number of 4x4 Safari or Hexa buyers who would like to switch its mind to the Buzzard if the AWD system is available. To further motivate the higher capabilities of the big SUV, the home-grown automotive company has decided to offer the car an independent rear suspension. Besides, the model also takes the multipoint terrain response system from the Harrier for such purposes.

In an effort to refresh the distinctive feeling for onlookers, the Tata Motors tries hard to make the Buzzard more unique and easily-identified from the five-seater version for the auto enthusiasts. Apart from the existing Harrier’s shades, the new Buzzard will be available with new colour schemes in which one option will be the shade of blue which showcased in Geneva last week.

It is a bit intriguing that before the official showcase Swiss, there is a supposed teaser image on the Internet hinting out the rotary gear selector and an electronic parking brake on the new Tata Buzzard. However, the pre-production model in Geneva Motor Show appeared with the identical gearshift knob and aircraft-inspired parking brake as that of the Harrier. Therefore, it is normal to foresee that these features will be missed out on the upcoming seven-seater SUV in India.

If the absence of rotatory gear selector/ EPB lets you down, the presence of sunroof will definitely raise you up. Aware of the increasing demand for cars with sunroof in the India market today, Tata Motors is contemplating on building the Buzzard with a special sunroof. The automotive company is reflecting on introducing an optional glass roof so that the substantial price increment resulted from the panoramic or electric-sliding sunroof could be avoided. 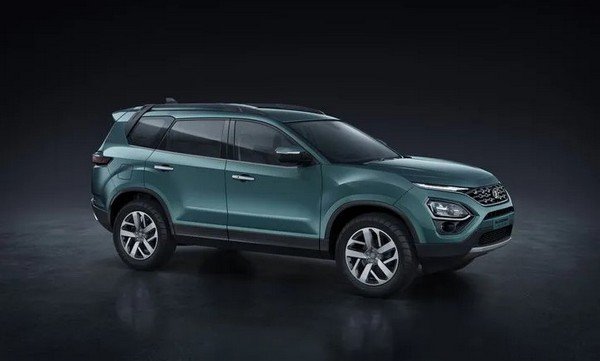 While the Tata Harrier is lucratively priced at around Rs 12.69 Lakh (Ex-showroom, Delhi), it is also expected that Tata will also position its seven-seat Buzzard at the pretty price bracket to appeal for more bunch of customers. As it is expected to cost around 1 Lakh higher than the ongoing Harrier, we can say that the brand new Tata Buzzard will get the price tag of around Rs 15 (on-road) Lakh in the Indian space.

On the 2019 Geneva International Motor Show, Tata has revealed its plan to launch the Buzzard by late 2019. That said, production-ready version of Buzzard will be mostly similar to the pre-production format and come several months after the launch of the Tata Altroz in the county.

>>> Also Read: Tata Harrier And Buzzard Likely To Soon Get An AWD System And Sunroof