2020 Mahindra XUV500 Spied For The First Time Ever

0 0
2020 Mahindra XUV500 is expected to make its debut at the 2020 Auto Expo. It is spotted wearing heavy camouflage for the first time recently.

A while ago, some reports suggested that Mahindra will unveil the 2020 Mahindra XUV500 at the next Auto Expo. Before its official debut, the new model was spotted undergoing road tests in India. Despite bearing a heavy camouflage, the new-gen XU500 can be seen with some notable exterior updates. 2020 Mahindra XUV500 is spotted with some exterior updates

It is visible from the spy shots that the new XUV500 will come with a more dominant grille and refreshed headlights on the front. To the rear end, updates are given to the taillights, roof-mounted spoiler and boot lid. Roofline on the new Mahindra XUV500 appears to be more slanted. It is also spotted sporting steel wheels. The interior of the new model remains to be seen. However, we can tell from the spy images that the Mahindra XUV500 will feature a new design for the steering wheel.

Apart from these exterior changes, Mahindra will deliver some mechanical updates as well. 2020 Mahindra XUV500 will share the same monocoque platform with Ford’s new SUV. It is expected that the new platform used on both SUVs will be the one used on the SsangYong Korando. However, Mahindra XUV500 will be essentially larger than the Korando. Under the hood, Mahindra XUV500 will get a new 2.0-litre turbocharged diesel engine that can develop a power output of around 180 PS. The current model of the XUV500 is making use of a 2.2-litre diesel engine that develops a maximum power of 155 PS and a peak torque of 360 Nm. The existing engine is mated with either a 6-speed manual gearbox or a 6-speed automatic gearbox. Moreover, a new petrol option which is currently not available will be added to the range. It is expected that Mahindra XUV500 will get a newly-developed 2.0-litre turbocharged petrol unit. The transmission range of the next-gen XUV500 is expected to include both a manual and automatic gearbox. 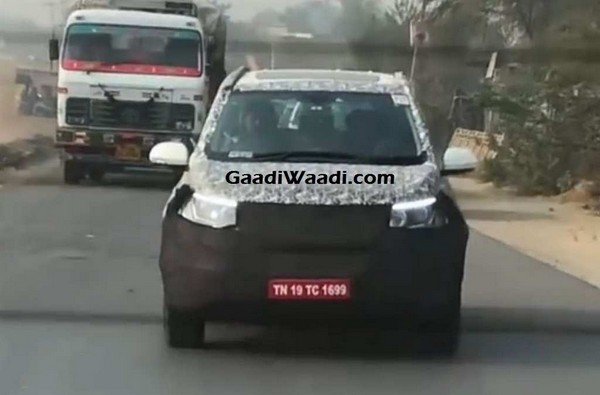 2020 Mahindra XUV500 will come with new powertrains and platform

Mahindra & Mahindra is reaching a crucial stage with many new launches and updates to arrive in the upcoming year. Some models which are due to receive updates include the Mahindra Thar, Mahindra Scorpio and Mahindra Bolero. Changes are required across its product line-up because of the upcoming safety and emission norms. After the presumptive debut at the 2020 Auto Expo, Mahindra XUV500 will go on sales in the first half of 2020.