With the BSVI norms approaching, every carmaker is updating its lineup. Ford recently launched the BSVI-compliant versions of its Figo, Aspire, and Freestyle. Now, the Endeavour follows suit with a cleaner powertrain. Of course, the launch is accompanied by a new price list for the long-standing Toyota Fortuner adversary. 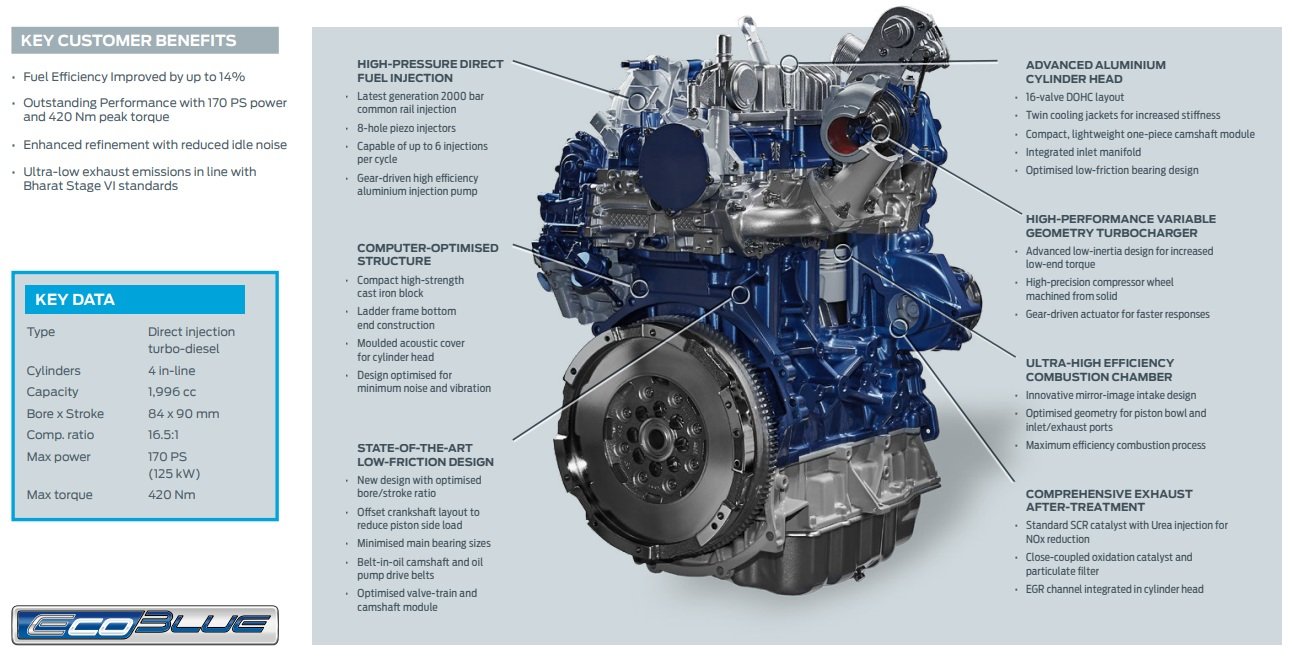 The updated Ford Endeavour now features a new engine under the bonnet- a 2.0-litre turbocharged (EcoBlue) inline-4 diesel. This motor is already in use in the international version of the Endeavour/Everest, and can produce a max power and torque figures of 210 PS and 500 Nm respectively. Sadly, it has been detuned for use in the India-spec model, and generates 170 PS of maximum power and a peak torque of 420 Nm. The transmission on offer is now a 10-speed automatic, capable of holding as well as skipping gears, favouring performance or efficiency as per the driver’s requirement.

“Endeavour is one of the most loved SUVs in India and was the only vehicle in its segment to beat an industry slowdown & grow both volumes, as well market share, in 2019. With 2020 Endeavour, we are offering a product that combines best of both worlds – outstanding capabilities & class-leading fuel efficiency – and thereby delivering more than SUV customers expect. With its enhanced value proposition, we are confident that the Endeavour will become the SUV of choice for several new customers.”

The 2020 Endeavour also features Ford Pass tech, which is essentially Ford’s connected car technology. It can be operated via a smartphone app. There are only three trims on offer:

Prices of the BSVI Endeavour start at Rs. 29.55 lakh and go up to Rs. 33.25 lakh. As per the company, these are just introductory prices. After 30th April 2020, there will be price increment of around Rs. 70,000 for each trim. The primary competitors to the Ford SUV include Mahindra Alturas G4, Toyota Fortuner, and the upcoming MG Gloster.

The base model of the Endeavour is now more expensive than the equivalent Toyota Fortuner. The latter is priced Rs. 28.18 lakh onwards, which is a difference of more than 1.2 lakh. That said, the top-spec Fortuner is more expensive than the top-of-the-line Endeavour by Rs. 70 thousand. However, even the top-spec models of the two SUVs could be priced at par with each other once the introductory offer is over.