This is the second incident that a Ford Endeavour caught fire in India. More tragically, the owner of the vehicle was burnt to death.

In a tragic accident which occurred two days ago in India, a Ford Endeavour caught fire and the owner was burnt to death. The victim is known to be the businessman and builder Mihir Panchal from Vadodara, Gujarat. When he was travelling on public roads, his Ford Endeavour SUV suddenly caught fire. 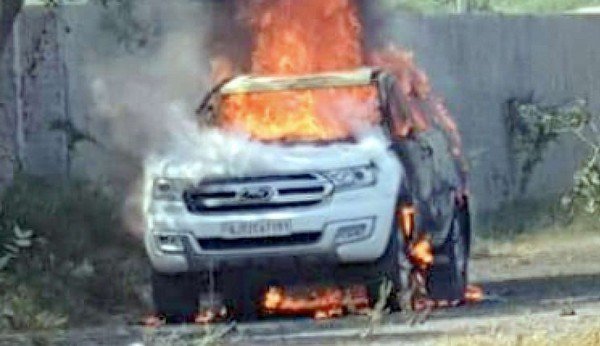 Witnesses reported that when Mihir realized the fire start to burn in the engine, he immediately pulled over his car. Unfortunately, when he stopped on the side of the road, an explosion occurred in the car. Right after the explosion, the front of the car was totally in flames. More terribly, the owner of the car, Mihir was not able to escape from the car. It is reported that at that time, Mihir was wearing the seatbelt which had stopped operating due to the malfunction in the central locking system, preventing him from getting out of the car.

The locals immediately informed the police and the fire brigade of the accident. Nevertheless, the accident occurs in the suburbs of Vadodara city so the help arrived too late to do anything. The cause of the fire which burnt the Ford Endeavour has been unknown and the police are examining the case. Homicide has also not been ruled out. Up to now, totally three incidents of Ford Endeavour catching fire have been reported, two of which are in India with the second one being this one. The first case happened seven months ago. In this case, fortunately enough, both the driver and the passengers managed to get out of the car just in time. There has been no official explanation made by Ford India as to why the SUV suddenly caught fire in both of the two cases.

Earlier, the first time that Ford Endeavour SUV caught fire was when it was tested in Australia. Ford had officially stated that it was only an unfortunate accident which rarely happens.

An innocent businessman has lost his life in a burning Ford Endeavour, which is so regretful. Ford India is expected to carefully look straight into the problems of their vehicles and find out the reasons for the two successive incidents of Ford Endeavour catching on fire which both took place this year. Finally, we expect that the police will soon disclose the cause of the fire so that the customers do not have to feel worried when travelling in Ford products.

6 Things To Know About The 2019 Ford Endeavour Facelift