First Hyundai Grand i10 Nios Rolls Off The Production Line.

Hyundai Grand i10 Nios has started to roll off the production line in manufacturer’s Chennai based facility ahead of its scheduled launch on August 20, 2019, Hyundai had already commenced bookings for the car on August 7, 2019, for a token amount of INR 11,000.  The Nios is the third launch from the Korean manufacturer this year, after the Venue and the Kona electric SUV. Seen in this image is the first Hyundai Grand i10 Nios to roll off from the production line.

Unveiled last week, the hatchback will be launched in a total of 10 variants with 4 engine-gearbox combinations and 6 colour options to choose from. The petrol lineup of teh Hyundai Grand i10 Nios will be offered in 4 variants- Era, Magna, Sportz and Asta, wherein the mid-spec Magna and Asta will also offer an optional AMT gearbox. The diesel lineup will only make its way to the market with 3 variants, ditching the base-spec Era trim and will offer an option of AMT in the Sportz trim only. Also, the new model will carve a niche over its rival by offering a diesel-AMT combination, which is something that was first seen in this segment on the Maruti Swift.

The existing engine configurations of the 1.2 litre 4-cylinder petrol engine that makes 83 hp and the 1.2-litre 3-cylinder diesel unit that churns out 72 hp of peak power have been carried over to the Nios, albeit in a BS6-compliant state. Both the motors will continue to come mated to a 5-speed manual transmission but the optional 4-speed torque converter automatic unit has been replaced with a 5-speed AMT. 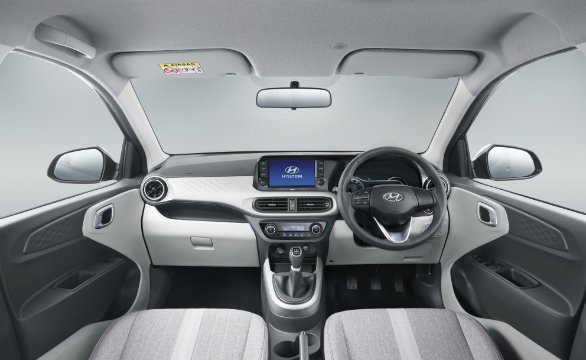 The dashboard of the Hyundai Grand i10 Nios shares bits with Venue, with parts like the steering wheel being a direct lift.

The Hyundai Grand i10 Nios is confirmed to share the showroom floor with the current Grand i10. Hyundai will be positioning this model as a premium product over the current Grand i10 by offering a longer features list and modern looks. The car will come with an 8.0-inch touchscreen infotainment unit which might get Hyundai’s Blue Link connectivity that debuted on the Hyundai Venue. Even the dashboard seems to share some bits with the Hyundai Venue, with the steering wheel being a direct lift. Moreover, the design of the dashboard has a strong visual connect with those of the Venue and Kona. Safely expect the Grand i10 Nios to be priced between INR 5-8.0 lakh (ex-showroom). The new model will rival the likes of Maruti Swift and Ford Figo.