Mahindra TUV300 vs Mahindra XUV500 In Comparison: What Are The Differences?

Our article provides an in-depth comparison between the Mahindra TUV300 vs Mahindra XUV500. Check out how these SUVs stack up against each other.

Mahindra & Mahindra has been famous for its boxy, butch-looking SUV cars in India. The Mahindra XUV500 and TUV300 are such good examples. Though the Mahindra TUV300 and XUV500 slot in different segments, they are both typical body-on-ladder Mahindra sports utility vehicles in the country. In 2019, Mahindra has given its TUV300 a new lease of life with an update to bring it up to the mark to catch up with the competition

The Mahindra XUV500, on the other hand, witnesses a better sales volume month-on-month. The TUV300 and XUV500 share a host of similarities and differences in their packages. From this, we put the Mahindra TUV300 and XUV500 in a comparison to see what they have in common and what deviates them from each other.

2. Mahindra TUV300 vs Mahindra XUV500 Dimensions: Which Car Is Bigger?

Since these SUVs are from the different segments, it’s easy to conclude that the Mahindra XUV500 will be bigger than the TUV300 by quite a margin. That could translate into a roomier cabin space on the inside which we would analyze in the next part of the review article. To know how the XUV500 measures up to the TUV300, have a look at the table below. From the massive dimensions of the XUV500, there’s no denying that the SUV attains a greater street presence and a substantial level of cabin space on the inside as compared to the smaller model. The TUV300, on the other hand, falls into the sub-4m SUVs class which is currently being led by the Maruti Brezza and the recently-launched Hyundai Venue.

3. Mahindra TUV300 vs Mahindra XUV500 Design: Which Is Better Looking?

While the Mahindra gives the XUV500 MPV-styled appearance, its Mahindra TUV300 follows roughly the butch and boxy styling design approach. Both the XUV500 and TUV300 received a facelift in 2018 and 2019, respectively, all to keep them fresh and competitive in the market. From the overall look, the Mahindra TUV300 shares several styling cues with the XUV500 while still having a number of distinctions compared to the older sibling.

The front end is where the Mahindra XUV500 and TUV300 have more personality and differ much. The XUV500’s cheetah-inspired front fascia looks nice with a large bold front grille with chrome-studded mesh patterns that gives the SUV an unmistakable style statement at the very first look. The Mahindra TUV300, on the other hand, gets a muscular piano black front grille with five rectangular vents that also looks quite premium. Both the SUVs gets projector headlamps with integrated daytime running lamps but in different layouts. The smaller TUV300 get a honeycomb lower grille flanked by two black square-shaped fog lamps housing at either end along with a metallic grey chin skid plate mounted on the blacked-out bumper of the vehicle. Whereas the Mahindra XUV500 gets a simple bumper design but what makes it special is the pair of angular fog lamps housing that gets the distinctive tear duct-like black accents, reminding us about the Cheetah’s face.

The Cheetah-inspired design of the XUV500 is complemented over the strong and slender shoulders of the SUV. The diamond-cut alloy wheels of the car also get a blacked-out treatment that looks extremely stylish and fits well with the muscular round-shaped wheel arches and the chrome side cladding. The paw-styled vertical door handles of the XUV500 are unique as well. Unlike the round wheel arches of the XUV500, the Mahindra TUV300 gets square-ish units over its sides. The compact SUV by Mahindra is packed with a set of sporty 10-spoke alloy wheels finished in the metallic grey shade that looks attractive and head-turning on every places it goes to. The TUV300 offers muscular back body claddings and steps on the side profile, thereby enhancing the aesthetic appeal of the model. The door handles, in the meantime, are body-coloured conventional units.

Mahindra TUV300 and Mahindra XUV500 are also totally different at the back. The new metallic grey X-shaped tailgate-mounted spare wheel of the TUV300 signifies the true dynamic spirit to its rear profile and at the same time gives it a distinctive characteristic. The roof-mounted rear spoiler and a set of clear-lens taillamps are some other highlights on the rear end of the TUV300. Though there’s no spare wheel, the XUV500’s rear end is still classy enough with a split tail lamps cluster, twin exhausts, roof spoiler and a redefined tailgate, all of which give the XUV500 a more tame and MPV-like silhouette.

It doesn’t take much time for us to define whether the interiors of the TUV300 and XUV500 are more or less similar. In fact, the Mahindra XUV500 is placed higher than the TUV300 in terms of pricing so it comes as no surprise, the XUV500 should tower over its younger brother by its more upmarket cabin. Mahindra has updated the XUV500’s interior with much-needed premium. It gets a dual-tone interior with tan-coloured leatherette seats that enhance the premium quotient of the SUV to a higher level. The centre console gets chrome inserts and piano black treatment while the soft-touch materials are used on the doors and dashboard. The Mahindra XUV500 is a seven-seater with bench seats for the 2nd row and third row of seats. Meanwhile, the Mahindra TUV300 gets a beige-black colour theme on the inside, combined with the massive glass area to makes the TUV300’s cabin bright and airy. The quilted leather upholstery looks pretty premium while the upright driving position and individual black armrests of the front seats do their bit for comfort other than the cosmetic appeal. Like the XUV500, the Mahindra TUV300 also comes with a 7-seater layout but it looks more interesting with a pair of jump seats at the back. However, space is a bit tight compared to the ample legroom and headroom that the XUV500 offers at the rear.

Mahindra TUV300 vs Mahindra XUV500 Features: Which Is Safer and More Convenient?

The TUV300 facelift is equipped with a 7-inch touchscreen infotainment system with a range of physical buttons in place of the older double-din audio system. However, it comes with a bit let-down that the system is not compatible with any of Android Auto, Apple CarPlay, something that we can see in most of the other sub-four-metre SUVs in the market. Other comfort goodies of the SUV include steering-mounted controls for audio and telephony, a MID for gear position indicator and fuel gauge readouts, Bluetooth connectivity, GPS navigation among others. The Mahindra TUV300 do offer 384 litres of boot space with all seats upright that can be extended to 720 litres while the second row and jump seats folded. Another big miss on the TUV300 is the lack of rear AC vents which is a necessary feature for a 7 seater car in India. The XUV500 is integrated with 6 airbags, ABS with EBD, seatbelt reminder, speed alert, manual override system as standard across the variants. Also, from the W9 trims upwards, the XUV500 does offer ESP and rollover mitigation, hill hold assist along with hill-descent control.

5. Mahindra TUV300 vs Mahindra XUV500 Engine Specs: Which Model Is Better In Terms Of Performance?

In terms of transmission, the XUV500 also looks better with an automatic gearbox on tap. The TUV300 makes do with a 5-speed manual gearbox only. While the XUV500 is a front-wheel-drive SUV, the TUV300 comes with a rear-wheel-drive system in comparison.

Surely, with a more powerful engine churning out higher power and torque output, the Mahindra XUV500 is faster than the TUV300 smaller sibling by a considerable level. The XUV500 can travel up from 0 to 100 kmph in only 12.55 seconds and hits the top speed of 185 kmph. The TUV300’s top speed and acceleration are rated at 156 kmph and 13.9 seconds, respectively.

In terms of fuel efficiency, the Mahindra TUV300 turns out to score higher than the XUV500 counterpart. The compact SUV gets an ARAI-rated fuel mileage of 18.49 kmpl for while the bigger 7-seater SUV makes do with only 15.1 kmpl both manual and automatic versions.

8. Mahindra TUV300 vs Mahindra XUV500 Price: Which Is Cheaper

As the Mahindra XUV500 is placed higher than the TUV300 in the company’s product range, the compact SUV is cheaper than the mid-size SUV by a substantial margin. Currently, the Mahindra TUV300 is retailed from Rs 8.54 – 10.55 Lakh (Ex-showroom, Delhi), making it one of the good model in the list of 7 seater cars under 10 Lakhs. The Mahindra XUV500’s price ranges from Rs 12.3 Lakh to Rs 18.62 Lakh (ex-showroom, Delhi) so it bridges the gap between the compact SUVs and premium 7-seater SUV that is priced above 20 Lakhs.

10. Verdict: Which Model Is Worth Buying Between Mahindra XUV500 vs Mahindra TUV300?

Apparently, both these Mahindra TUV300 and Mahindra XUV500 have their own value. Both these SUVs are worth buying as they all boil down to your requirement and needs. If you are looking for a sub-four-metre ladder-on-frame car with authentic SUV styling, the TUV300 is here for you. Or else, if you are in the market for an affordable SUV with decent desirability, premium cabin, 7-seater layout and a sunroof under Rs 20 Lakhs, the Mahindra XUV500 is totally worth your consideration. 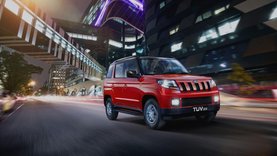