The latest TVC for the Renault Captur has been filmed at picturesque Pangong Tso, one of the coldest lakes in India

The Renault Captur sits at the top of the company’s range for the Indian market. Launched in 2017, the Captur has so far failed to live up to the manufacturer’s expectation. This slow-selling model is now offered with a range of discounts and benefits in an attempt to boost sales. The company has even come up with a new TVC for the slow-selling model The filming of this TVC has taken place at the picturesque Pangong Tso, one of India’s highest lakes where the water is frozen throughout the winter period 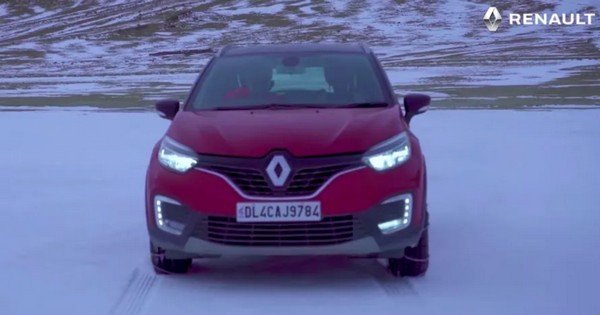 The new TVC highlights Renault Captur’s reliability even in extreme weather. In such cold weather, the fuel and fluid of vehicles stand a high chance of being frozen, which can badly affect their performance. However, it has been shown in the multimedia clip that the Renault Captur confronts the harsh weather with a confident attitude. The video highlights the Captur’s remarkable ground clearance of 210 mm, which is higher than what any other model offers in the segment. A good ground clearance enhances a vehicle's rough-road capacity significantly, which is a plus for the Captur. However, it may be noted here that the Captur is not available with a four-wheel-drive system and it even lacks dedicated driving modes to take on the rough terrain. Renault Captur is claimed to feature an incredible offroad capacity

Renault Captur comes with a 1.5-litre naturally aspirated petrol engine that manages to output a maximum power of 104 bhp and a peak torque of 142 Nm, and a 1.5-litre K9K diesel engine with 108 Bhp and 240 Nm. Only manual transmission is available on both the engine options. Besides, after the recent updates, the Captur guarantees a higher level of safety. The safety package available on the Captur includes dual front airbags, ABS with EBD, front seatbelt alert, and speed warning alert and rear parking sensor.

The India-spec Renault Captur is based on the Duster. Both of them share the same platform and the diesel engine. Recently, the company lowered the price of its flagship offering by Rs 50,000. The starting price of the Captur now pegged at Rs 9.49 lakh*. The diesel-powered base model has been priced at Rs 10.49 lakh*. The top-spec variant, Platine, costs Rs 11.99 lakh* (petrol) and Rs 12.99 lakh* (diesel).

*all prices are ex-showroom, Delhi