A test mule of the upcoming facelifted Tata Nexon has been spied testing recently with only its front being camouflaged.

This is going to be the first major update that the vehicle receives since its introduction to the market in September 2017. The new Nexon is expected to feature the IMPACT 2.0 design language. In the spy images, a more polishing pair of lights can be easily noticed in the front. Unlike what was previously rumoured, the polishing headlights bear no resemblance to those on the Harrier. Instead, the home-grown automaker equips its Nexon with a new lighting system with a twin-barrel styling with a view to establish an identity for its new vehicle. Some of the outstanding exterior features of the new Nexon include projector headlights with integrated LED DRLs, restyled bonnet, a new air dam and fog lamps. The Tata Nexon facelift will feature some updated features from the current model inside out.

As regards the interior, the Tata Nexon facelift is expected to come with a wide range of new features as well with a view to increasing its competitiveness in the teeming SUV segment. These will include a cruise control, an all-new infotainment system, a digital screen for the instrument cluster, etc.

The facelifted Nexon is likely to receive its power from the same 1.2-litre turbo gasoline burner and a 1.5-litre turbo oil burner. However, both of them will be upgraded to comply with the upcoming BS-VI emission standards. While the petrol motor can deliver 110 PS against 170 Nm, the diesel unit can produce 110 PS against 260 Nm. The transmission duties on both of the two versions will be undertaken by a 6-speed MT or AMT. 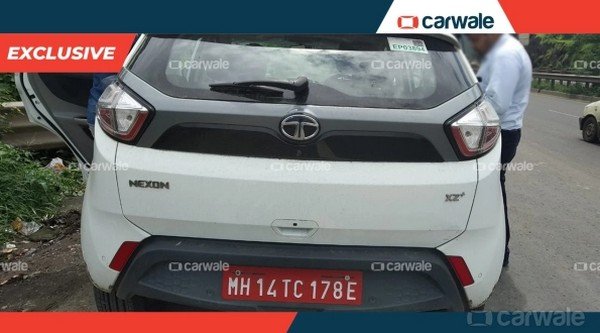 The powertrain options on the new Nexon will remain unchanged.

There is no official confirmation on the launch date of the new Nexon but we can expect its unveil to take place around the festive season or at the 2020 Auto Expo. Some major rivals of the Tata Nexon in the Indian auto market include the Ford EcoSport, the Mahindra XUV300 and the Maruti Vitara Brezza and the Hyundai Venue.