As sunroofs are now becoming more popular, a lot of companies have started equipping even their affordable models with this feature. Here are many as 10 Cheapest Cars in India With Sunroof, which includes everything from the Hyundai Venue to the Honda City

Several years ago, cars with a sunroof were considered very premium and out of reach for regular car buyers. However, with the ever-growing rate of the automobile industry, sunroof, which was never been a concern for middle-class car buyers, has become a popular attraction. There has been an increasing number of affordable cars that are equipped with a sunroof. Most of the time, the sunroofs are available at the top-spec variants only, which would cost you extra money than the standard models. However, in this post, we bring to you a list of 10 Cheapest Cars in India With Sunroof, which features models like the Hyundai Venue and the Honda City.

Hyundai Venue is the latest to join the sunroof cars club in India. Notably, the Venue is not the only Hyundai car with sunroof but it is the most affordable of the lot. Compared to other same-segment counterparts, for example, Tata Nexon, Ford EcoSport, Maruti Brezza and Mahindra XUV300, Hyundai Venue is also a tad cheaper. Besides the offer of a sunroof, Hyundai Venue also scores well due to other advanced features, including the connectivity options, 8-inch infotainment system, cruise control, wireless charging, air purifier and more.  The electric sunroof is available only on the top-spec SX trim. The price of Hyundai Venue sunroof models ranges from Rs 9.54 lakh (SX Turbo petrol) to Rs 11.11 lakh (SX Plus Turbo dual-clutch transmission). 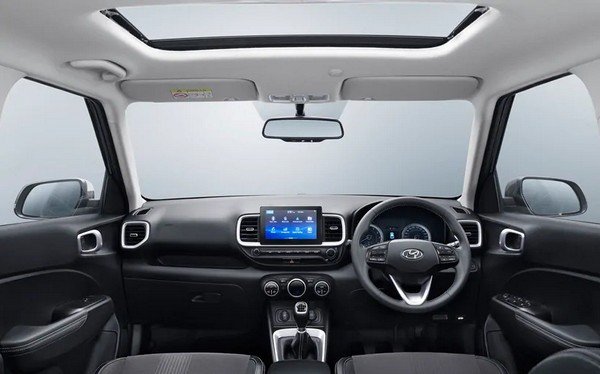 Next in our list of 10 Cheapest Cars in India With Sunroof is the Ford EcoSport. It was among the first vehicles to set foot on the now-popular sub-four-meter SUV segment. It was also once the most popular in its class, however, with the entrance of other newer models, the Ford EcoSport is losing its appeal. But still, the Ford EcoSport is a trusted and well-round offer. On top of that, the top-range EcoSport gets something other new models don’t have – a sunroof. 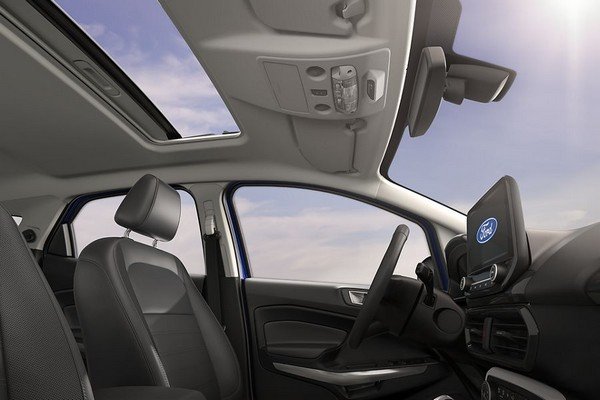 Honda WRV is another vehicle from the sub-four-meter segment. Based on the hatchback Honda Jazz, the Honda WRV was introduced for the first time in India back in 2017. Even though this product from the Japanese manufacturer could not gain such huge popularity as the Ford EcoSport or other segment-leading models, it is still a legitimate option with a butch-up styling and a well-equipped features list with the highlight of a sunroof. Just like other cars on the list, Honda WRV sunroof is only available on the top-of-the-line models. Along with the sunroof, top-spec Honda WRV also gets some other interesting fitments, including a 7-inch touchscreen infotainment system, automatic climate control, push start-stop button, along with some safety features like dual front airbags, ABS with EBD and rear parking sensor with a camera. Here are the prices of each and every Honda WRV variant that is avaliable with a sunroof: 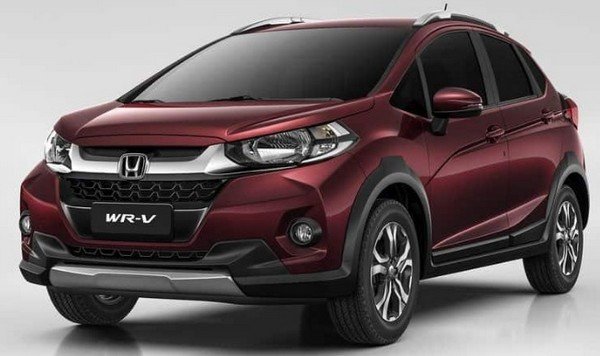 Mahindra XUV300 is the latest success story in the sub-four-meter segment. It has been quick to become the third best-selling model in the space within months of its launch. It is equipped with a host of features, some of which are first in the segment, for example, seven airbags, dual-zone climate control and full disc brake. Apart from these features, Mahindra XUV300 also gets front and rear parking sensors, tyre pressure monitoring system, 7-inch touchscreen display with Apple Carplay and Android Auto, and especially a sunroof. The sunroof for the Mahindra XUV300 is available on the top-spec W8 Option variant. Here are the prices of the fourth model in our list of 10 Cheapest Cars in India With Sunroof- 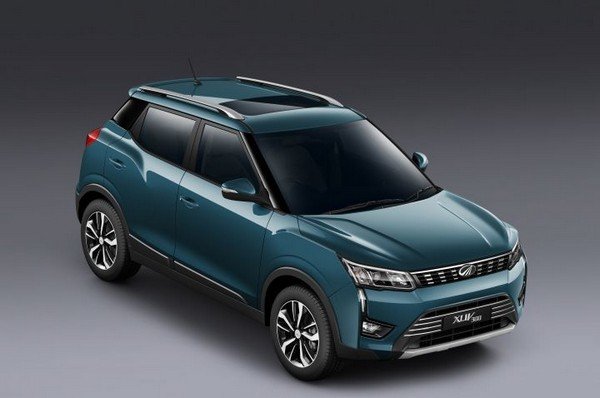 Hyundai Creta is the segment-leading model in the small SUV space. This SUV could gain such enormous popularity mostly thanks to its fully-loaded feature list. Hyundai Creta is equipped with wireless charging, ventilated seats for the front row, power-adjustable driver seats, cruise control, automatic climate control and of course, sunroof. It was the first one from its segment to get a sunroof. However, things will change soon with the entrance of the Kia Seltos which also features a sunroof. The Creta is among the highest-selling models in our list of 10 Cheapest Cars in India With Sunroof. Here are the detail prices of all Hyundai Creta sunroof variants: 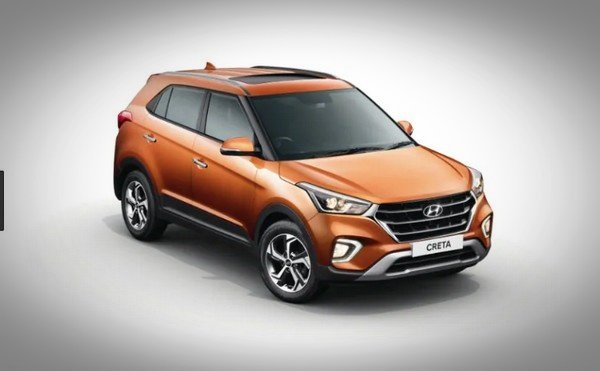 Mahindra XUV500 is a fully-loaded vehicle with a long list of features. Just like other cars on the list, Mahindra XUV500 sunroof is only available on the top-spec, however, it is among the rare vehicle which offers a very well-equipped standard offer. The entry-level variant of the XUV500 comes with ABS with EBD, dual front airbags, four-wheel disc brake, four power window, electrically adjustable mirror and a 6-inch display. Moreover, Mahindra XUV500 also comes with automatic transmission option on most variants except the base trim. On the higher variants, Mahindra XUV500 gets cruise control, 8-way electrically-adjustable driver seat, 7-inch touchscreen infotainment system with Android Auto support, rear parking camera with sensors, push start-stop button and cruise control.

The Tata Hexa is the current flagship model in Tata Motor’s portfolio. As a flagship model, the Hexa comes with all the up-market and modern technologies. And of course, a sunroof is one of them. An electric sunroof is currently found on the XM and XM+ variants. This SUV recently received updates for the exterior and infotainment system. Besides sunroof, Tata Hexa also comes with cruise control, automatic headlamps with LED DRL, rain-sensing wiper, ABS with EBD six airbags, traction control ESO and hill start/descent control. Another Hyundai model to have made it to our list of 10 Cheapest Cars in India With Sunroof is the Hyundai Elantra. The D-segment sedan comes with Honda Civic and Skoda Octavia. Sitting in a premium space, all of these models are available with a sunroof. However, the latter two are more expensive. While the Hyundai Elantra is priced from 13.82 - 20.05 Lakh, Skoda Octavia and Honda Civic’s price range are 15.49 Lakh - 27.0 Lakh and 17.72 - 22.32 Lakh, respectively. It also means that the Hyundai Elantra is the most affordable full-size sedan car with sunroof in India at the moment. Only the SX grade (for both diesel and petrol) is equipped with a sunroof. Here are the prices - Hyundai Verna is among the most popular mid-size sedan at the moment. However, the sales of this sedan have been decreasing for a while now. The Verna is on offer with loads of premium features including a touchscreen display with Android Auto and Apple Carplay, ventilated seats, hand-free boot lift, and last but not least, an electric sunroof. The standard safety kit includes the dual front airbags, ABS and ISOFIX. The top-spec variant is equipped with up to 6 airbags. See the prices of all variants on Hyundai Verna with sunroof below. The last model in our list of 10 Cheapest Cars in India With Sunroof is the Honda City. it is positioned in the same segment with the Hyundai Verna. Another common feature between the two models is that both are available with a sunroof. Even the previous generation of the Honda City had a sunroof. Besides the electric sunroof, Honda City also features cruise control, rear parking camera, push-button start/stop, automatic climate control, a 7-inch touchscreen infotainment display, rain-sensing wiper, auto-dimming IRVM to name a few. In terms of safety features, Honda City gets dual front airbags, ABS with EBD, ISOFIX child seat mounts and rear parking sensor across the range. The top-spec ZX is available with six airbags. Here is the price of Honda City with sunroof Above is the list of 10 Cheapest Cars in India With Sunroof, which includes everything from a Hyundai Venue to a Honda City. To get more car market news and other car buying guides, please visit our site, IndianAuto.com.