An all-new SUV based on the global hot-selling Toyota Corolla can be christened under the name of “Frontlander”.  The world premiere is likely to happen next year.

Toyota seems to be very aggressive towards its SUV plans for India as well as the international markets. Just some weeks ago, a set of spy images from Thailand emerged to us, showing what happened to be the upcoming SUV based on the Toyota Corolla. A little while back, Toyota unveiled the crossover version of the Yaris dubbed the Yaris Cross in Europe, bearing some similarities with the regular Yaris supermini model. In a similar fashion, spy shots of the Corolla Cross also cropped up around the Internet, previewing how the car might look like in the near-production form. Like the Yaris, the Toyota Corolla will also receive a crossover version that shares its platform and hybrid powertrain system.

While heavily-camouflaged test mule of the Corolla-based crossover suggests that it could share the same TNGA architecture with the model it’s based on, we do expect the SUV to sit right above the C-HR and under the RAV4 in its global range. A revised front face with a crossover-like roofline, raised ride height, new tailgate, dual exhaust tips and beefed-up wheel arches are also things that we spot on the prototype. 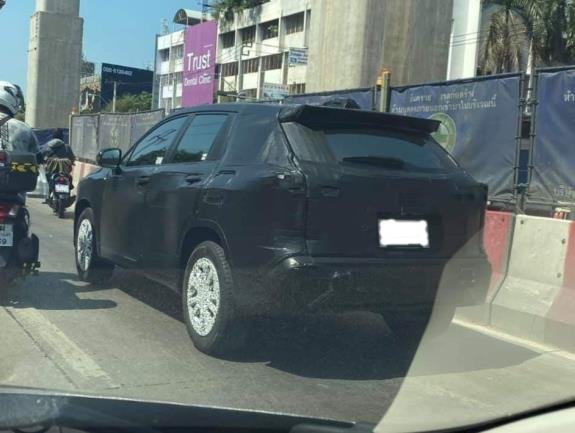 The Corolla-based SUV has been spied testing on the roads multiple time ahead of its global debut.

In all likelihood, Toyota’s forthcoming SUV might be powered by a 2.0-litre Dynamic Force fuel-injected petrol engine that can develop 172 BHP of max power and 200 Nm of peak torque. Transmission choices could be either a 6-speed MT or a CVT. Besides, a 1.8-litre hybrid motor coupled with an e-CVT gearbox and multiple drive modes might make ways to the vehicle as well.

Interestingly, as per some recent reports, the fourth-generation Toyota Harrier recently introduced in Japan could be named the Frontlander outside of the Japanese market. However, we do anticipate that the latest Corolla hatch-based crossover could carry the nameplate instead, given the fact that the SUV could not only target the Asian markets but some developed countries as well. While reports say that the 2020 Toyota Harrier will be dubbed "Frontlander", we expect the Corolla-based SUV to carry that name instead.

As for the Toyota Harrier, the latest-gen SUV could go on sale in China first and come as a fruit of the joint venture between Toyota and GAC. It also stands on the modular TNGA platform and gets coupe-like roofline, sharp front facade, large greenhouse area along with raked windshield and more.

The new-gen Toyota Harrier will be powered by a 2.0-litre direct-injected gasoline engine making 170 bhp of power and 207 Nm of torque, coming alongside a direct-shift CVT option. The hybrid variant of the Japanese Harrier should use a 2.5-litre petrol motor paired with an 88 kW electric motor (for the front-wheel-drive version) or a 40 kW electric motor (for the AWD configuration).