Hyundai offers discounts of up to INR 2 lakh this April!

19 0
With the coming of 1st April and a new financial year, Hyundai is the latest in a line of auto makers offering substantial discounts across its entire model range this month With the start of the new financial year, automobile manufacturers look to boost sales of its new and older stock of its models by offering massive discounts during the entire month. While some car makers are busy in coming up with fun pranks to wet the customer’s appetites and have a bit of laugh while they’re at it, manufacturers like Maruti-Suzuki, Mahindra, Tata and Hyundai are busy in getting the cash registers ringing.  As we reported in our previous posts about the discounts offered by other manufacturers like Maruti-Suzuki, Tata and Mahindra, in this post we’ll focus on the massive discounts that Hyundai is offering across its entire range of models. Despite the big gap between its model prices, the company will be offering benefits on almost every model in its arsenal, be it its compact hatch or premium sedan. This includes models like the Santro, Grand i10, Xcent, Elite i20, i20 Active, Verna, Elantra and Tucson. As you may have noticed, the only model to be no included in this deal is Hyundai’s only SUV in the lineup - the Creta. Despite that, Hyundai has really gone all out and is giving away benefits up to INR 2 lakh on models like the Elantra. If you’re thinking of picking up a brand-spanking new car from the Korean automaker this month, these are all the discounts that they are offering - The Hyundai is Santro is the smallest but the latest model to arrive in the showrooms of Hyundai. The compact sedan now comes with Hyundai’s new familiar design laguage and is a world apart from the Santro’s of old in terms of interior design and features. While it sits below the Grand i10 in Hyundai’s model hierarchy, its design follows very close to its bigger brother. It is extremely feature-loaded and comes with niceties like electrically adjustable ORVMs, a 7-inch touchscreen infotainment system with smartphone connectivity (Apple CarPlay, Android Auto and MirrorLink), voice recognition and iblue audio remote app support, rear AC vents and steering mounted audio  with Bluetooth controls. The new Santro comes with two options to draw power from - a 1.1-litre petrol and a 1.1-litre petrol-CNG. The petrol engine produces 69bhp and 99Nm of torque, and it is married to a 5-speed manual transmission or a 5-speed automated manual transmission. The CNG-assisted motor churns out 59bhp and 84Nm of torque. In the Indian market, the Santro competes with the Maruti WagonR and the Tata Tiago. During this month, dealers will offer an exchange bonus up to Rs 20,000 and further benefits worth Rs 11,000 on the Hyundai Santro. Competing with the premium compact hatchbacks like the Maruti-Swift and Ford Figo, the Gran i10 is Hyundai’s answer to the segment. While it has been one of Hyundai’s highest selling models since its launch in 2013, Hyundai will be introducing the new generation of the model by 2020. In its current generation, it gets three options under the hood -  1.2-liter Dual VTVT four-cylinder engine capable of 83 PS and 116 Nm of torque,  1.1-liter three-cylinder U2 CRDi unit developing 71 PS and 160 Nm of torque and petrol-CNG version which develops the same output as the petrol variant. The Hyundai Grand i10 is now available with nearly a lakh worth of benefits across all 14 of its variants, including the CNG-powered Grand i10 Prime model. Being the developing country that India is and made up of the growing middle-class that India has, the compact sedan is the icon of our rising disposable. While the Maruti Dzire rules the roost, the only model in the segment to come anywhere close to its sales numbers is the Hyundai Xcent. It gets similar creature comforts and engine options as the Grand i10 but doe offer better luggage space with its boot. Essentially, the Xcent is the sedan version of the Grand i10. In order to benefit from the Indian small car excise duty, the Xcent measures under 4 meters in length. Buyers can avail a total discount up to Rs 85,0000 on all variants of Xcent, including the CNG-equipped Prime variant. Hyundai dealers are also offering heavy discounts on the base price for the lower-spec petrol S variant, worth Rs 89,000. The Hyundai Elite i20 is one of the company’s premium breadwinners and completes in its class with the Maruti Baleno and the Honda Jazz. Hyundai introduced the car to India in 2014, and was crowned Indian Car of the Year the very next year in 2015. The Elite i20 is available with a 1.2-liter petrol engine and a 1.4-liter diesel engine. The petrol motor makes 83bhp and 114Nm of torque and comes with a 5-speed manual transmission. The 1.4-liter diesel engine makes 90bhp and 220Nm of torque and comes paired to a 6-speed manual gearbox. The petrol variants of the Elite i20 also have the option of being mated to CVT transmission. 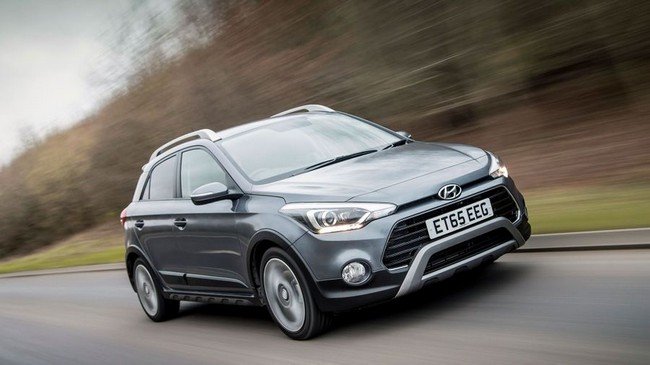 The Hyundai i20 Active, on the other hand, is the more rugged and adventure-ready sibling to the Elite i20. Following a new trend of crossover hatchbacks in the country, the Hyundai i20 active competes with the likes of the Toyota Etios Cross, Fiat Avventura and VW Polo Cross. While it does have suspension and body panel upgrades over the standard car, it gets the same engine choices as the standard hatch. Hyundai’s premium hatchback the i20 and its adventure-ready derivative the i20 Active, on the other hand, are both available with an exchange bonus up to Rs 20,000. The Hyundai Verna is another popular model from the house of Hyundai and is a pioneer for the premium sedan boom in the country. The model was one of the first cars to offer the average Indian a taste of luxury, with a touch of power and all at an affordable price tag. Highlights of 2017 Hyundai Verna's equipment list include 16-inch diamond cut alloy wheels, projector headlamps with LED DRLs, projector fog lamp, LED tail lamps, a sunroof and 7-inch touchscreen infotainment with Android Auto, Apple CarPlay and MirrorLink. The new Verna also gets segment-first ventilated front seats and Smart Trunk functionality. Powering the car is a choice of four motors - a 1.4-litre petrol motor making 100bhp and 132Nm of torque, a 1.6-litre petrol engine making 123bhp and 151Nm of torque, along with a pair of 1.4-litre diesel making 88bhp and 220Nm of torque and 1.6-litre diesel motor churning out 128bhp and 260Nm of torque. While the pair of 1.4-litre engine are strictly mated to a 6-speed manual transmission, the 1.6-litre petrol and diesel engines can be had with either a 6-speed manual or 6-speed automatic transmission. While Hyundai is not offering substantial discounts on its mid-size sedan this April, potential customers of the Hyundai Verna this month could benefit from discounts up to Rs 30,000 on the mid-size sedan. The Hyundai Elantra is the most premium sedan in the company’s model lineup. While the 2019 facelifted version of the Elantra has already been launched in international markets like USA, we continue to get the non-updated version of the Elantra for now. However, Hyundai has already begun the testing of the car in our country and will be launching it very soon. While we wait for that car to arrive to our shores, the current version of the Elantra continues to impress with its large list of features, powerful engine and all-around comfortable experience. Hyundai’s flagship sedan, the Elantra, comes with total benefits worth Rs 2 lakh – a cash discount of Rs 1.25 lakh and exchange benefits worth Rs 75,000 – across all variants. As the 2019 Hyundai Elantra is around the corner, haggle well with dealers and you could be walking with even better deals. Arriving on our shores after skipping a generation, the Hyundai Tucson is company’s premium SUV which sits above the Creta in the company’s model hierarchy. Powering the car is a 2.0-litre MPI four-cylinder petrol engine that produces 152bhp and 195Nm of torque, as well as a 2.0-litre CRDi four-cylinder diesel engine which is available two different states of tune - 136bhp and 184bhp. Transmission choices include a 6-speed manual and 6-speed automatic, and an all-wheel drive system available offered on select models. In India, the Tucson goes up in competition against the likes of VW Tiguan, Honda CR-V, Jeep Compass and also the upcoming MG Hector. Dealers are now offering a cash discount of Rs 25,000 on the Hyundai Tucson, along with additional exchange benefits up to Rs 75,000.