Here a highly customized Mahindra Thar, which features a panoramic sunroof. The overall cost of this modification is around Rs 4.5 lakh.

Mahindra Thar is popular among the buyers who love to customize cars as per their preference. The SUV is known for its robust looks and off-roading capabilities. Earlier, we’ve featured a lot of distinctly modified Mahindra Thar models on our website. Here, today, we have one such modified Mahindra Thar, which is probably the first one to feature a panoramic sunroof. This mod job has been done by BackYard Customs Jammu and the off-roader now looks ready to counter some badass terrains. Along with the addition of a panoramic sunroof, this modified Thar also features a bunch of aftermarket fitments outside and inside. This Mahindra Thar is named as Ripper and it is a hardtop SUV. 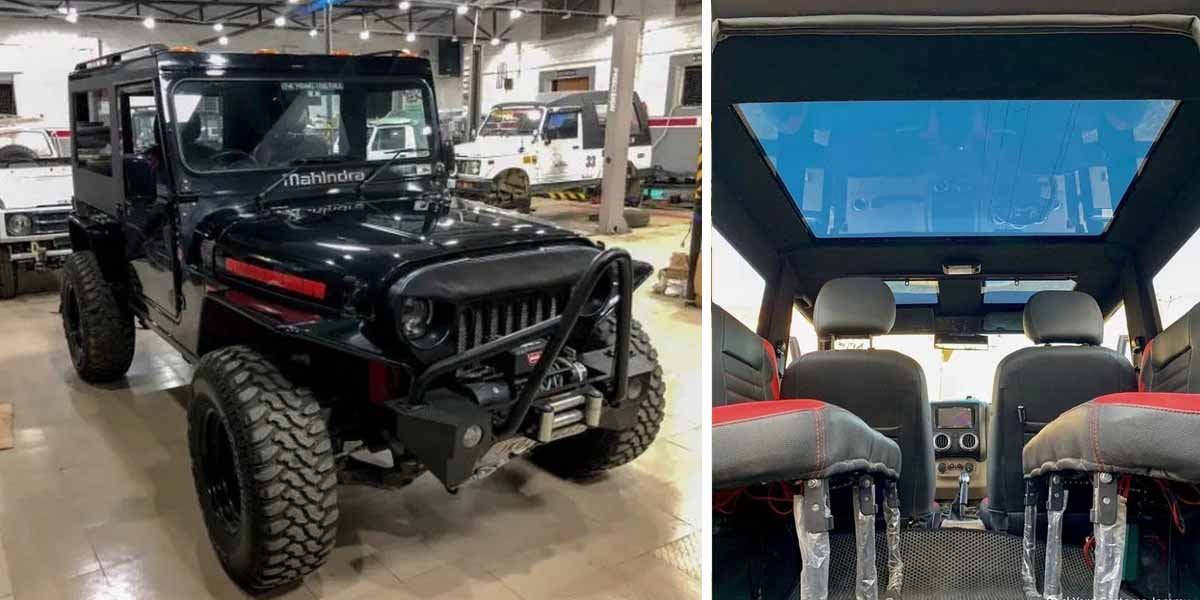 Starting from the front fascia of the car, the conventional 7-slat grille has been slightly tweaked. The car continues to feature regular round headlamps, but they now have projector type lights in it. The front bumper has been replaced by an off-road unit with a 9,500 lbs electric winch. Moreover, the aftermarket bumper also houses fog lamps. Moving towards the side, the off-roader now looks taller than before, thanks to the 3.5-inch lift kit along with thick dual-purpose tyres and wheels. Moreover, the stock suspension has been replaced with Arc CFL units. The roof of the car also employs Hummer like roof rails and lights. Moving towards the rear profile, the SUV gets LED taillights and custom made rear bumper. Inside, the cabin of the has been upgraded to look more premium and upmarket as it features bucket seats, a touchscreen infotainment system and upgraded audio set up. The main attraction inside is the panoramic sunroof as it gives the SUV a more airy and premium look. Earlier, we’ve seen a lot of modified Mahindra Thar with an aftermarket sunroof, but this is the first time that we've seen the SUV with a panoramic sunroof. It took around half a month for BackYard Customs to complete this project, and the overall cost of this modification is around Rs 4.5 lakh.