Here's a Hyundai Elite i20 Drifting Like a Total PRO

Drifting is really fun an activity to do in a car. Here's a Hyundai Elite i20 pushing around its tail with all the madness.

Movies like ‘The Fast and The Furious – Tokyo Drift’ and games like ‘Need For Speed’ will always be a favourite of car enthusiasts. The former showcased the drift culture of Japan, where drivers oversteer their cars while manoeuvring a turn. The latter, however, let the enthusiasts drift the car in the video game and understand the physics that goes behind doing it. Drifting a car is fun for sure and when the tail slides out, an adrenaline rush is a given. Therefore people try it in real-world too. Here’s a video clip showing an enthusiastic young guy drifting his Hyundai Elite i20. Although he is not actually drifting the car since power sliding an FWD car results in understeer and not oversteer but the visual drama that ensues is no less in any sense.

2020 Hyundai i20 Detailed Inside Out in a Walkaround Video

Basically, the driver of this Hyundai Elite i20 is using the handbrake of the car to lock the rear wheels and slide the tail out, thus achieving the action of oversteer. This way, the car can drift but not for too long a duration. Rear-wheel drive hatches and sedans are not at all affordable in India. Most of them start northwards of Rs. 30 lakh mark. Thus, through handbrake turns is how one can experience drift in a low-cost FWD car. However, in a RWD or AWD car, the driver has greater control over the car while drifting than in an FWD car. Also, it is not safe either to drift a car or perform any other stunt on public roads, regardless of what car you use. 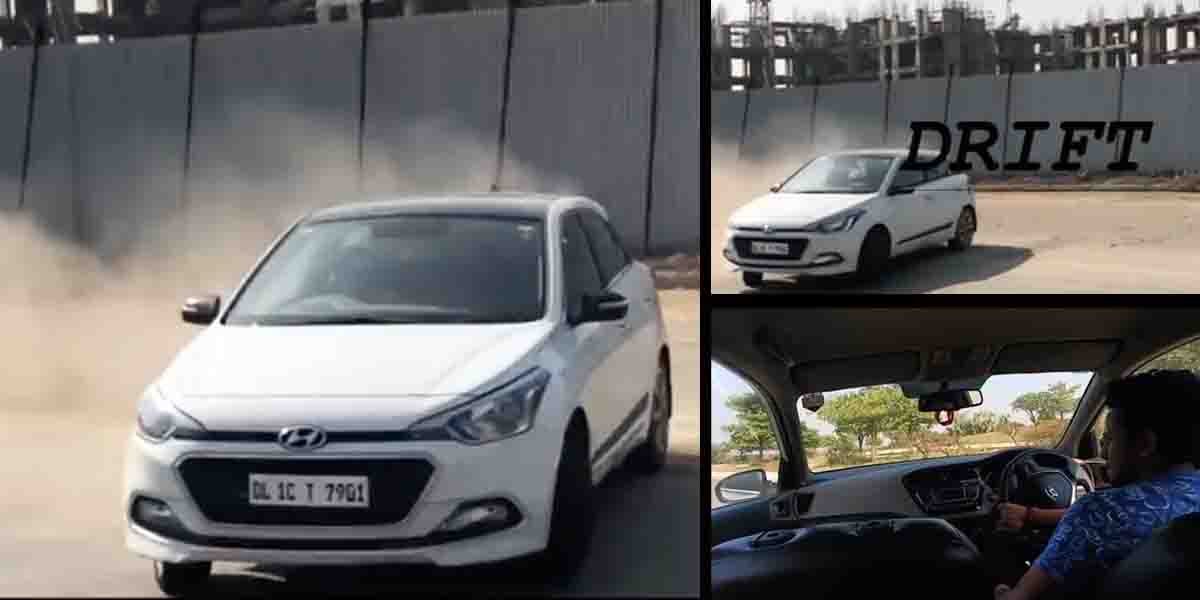 Talking of the Hyundai Elite i20, it is an adequately powerful car for its price and segment. It offers a stable ride and with a low centre of gravity, sliding it around empty stretches can be fun. Initially, it was offered with 3 engine options – 1.2L petrol, 1.4L petrol and 1.4L diesel. However, in the BS-6 era, the carmaker is offering the car only with a 1.2-litre petrol motor. It can now only be had with the 1.2L Kappa motor that is capable of whipping out a rated output of 83 PS and 114 Nm. It is offered with 5-speed manual and CVT transmission options. Hyundai is also planning to launch the next-gen Elite i20 in the country later this year. With the new i20, the carmaker will also re-introduce the option of a diesel engine.