For many reasons, it took Ford nearly 5 years to make the belated introduction of the upgraded Ecosport. But who really keeps track on time to seriously care about how late it is. The fact is we are now presented with this new sub-SUV and you can put your expectation to rest.

What the car offers to go beyond what you can anticipate, so don’t bother making a list of what to expect. We tested and came up with this brief report which covers nearly everything you, a prospective buyer, need to know before making a decision to purchase this game changer. 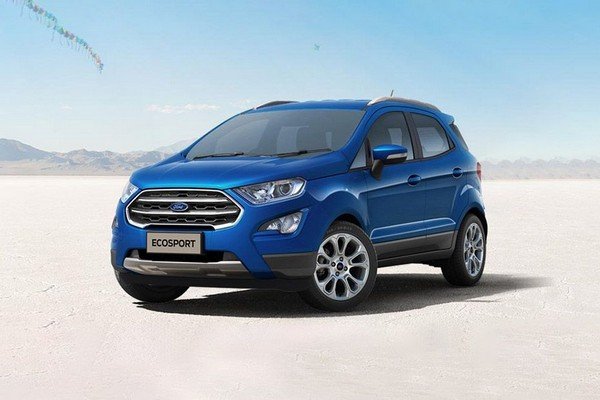 At the first glance, we can all easily notice a few changes which have been made to bring about Ford’s new look. Some work was done to enlarge the front grille’s frame, making it look more like a gaping mall of some animal with the iconic Ford badge put at the centre. Each updated headlight unit gets integrated with new LED daytime running lights and projector. The fog lights, for its own part, become angular, replacing the old set of round units on the old model back then. Quite an amount of work carried out to transform the sub SUV. No one says the competition is a piece of cake

The sad news is the 17-inch alloy wheelset doesn’t come as standard and appear solely at the Titanium and Titanium+ variants. The only one trait that may get you confused the older version with the current one is the spare wheel hung on the tailgate lid when you catch a look at the two from behind. And the spare wheel itself works pretty well in bringing a sporty and chunky touch to the rear end, though at the same time it is just a small feature which comes as optional, quite convenient for clients who prefer a smoother and more delicate look at the back.

But cosmetic enhancement alone will never be counted as the real enhancement; sure it must always come from the inside that really matters. A pair of USB portals is added to the centre console alongside the new layout of more convenient and user-friendly AC controls. And accompanying the standard AC, the climate control system maintains the set temperature no matter if it is 40 degrees hot outside. A new 8-inch touchscreen for Ford’s SYNC 3 infotainment system surmounts the centre surmounts the centre console and is compatible with Apple Carplay and Android Auto. The system itself as a whole is satisfyingly responsive, having flawless resolution and vivid colours, making for an excellent entertainment device. Armrests at both seat rows are equipped with cup holders as well. Black continues to be the theme of the entire interior in this version of the Ecosport, quite a sensible choice made by the manufacturer for the colour’s long-lasting resistance to light or wear and tear in general. The vehicle goes on with the wheelbase which is carried over from the last outgoing model, leading to the same volume of interior space. Other unchanged features, which can be easily spotted, include seat number and seat layout (supporting 4 people including the driver), boot space of 352 litres of room, which can be boosted up by another 748 litres (together amount to 1100 liters of space) with the rear seat row being folded up. The Ford this time gets the top-notch cruise control alongside adjustable speed limiter device. The device maintains the speed set by the driver, speaking of convenience, and the car will not go any faster even when you accidentally hit the gas pedal. A package of rear-view camera, automatic wiper, TPMS come as standard (the automatic variant also gets paddle shifters as well). Moving to the safety features, six airbags, ABS with EBD, TCS, hill-start assist and EBA are sadly limited to the higher-end Signature Edition and S trim, which also are exclusively equipped with the sunroof. Yes, once again to everyone’s frustration, sunroof doesn’t show up as standard across all versions, failing all the expectation from the clients.

The long-awaited Dragon series of Ford’s petrol engines this time will power the 2018 facelift of Ecosport. The dragon engine is mated to either the 5-speed manual gearbox or the 6-speed automatic gearbox, taking the place of then 1.5litre three-cylinder unit which produces 123hp of force and 150Nm of torque. Furthermore, the familiar 1-litre EcoBoost turbo-petrol engine is welcomed and made its appearance in the S variant. Its performance remains the same with 125hp and 170Nm of torque, but this time the engine comes with a new six-speed manual on option. Meanwhile, Ford hasn’t made any changes to the 1.5-litre, four-cylinder diesel motor, which generates 100PS and mated to a five-speed manual gearbox. No automatic transmission on offer on this version. But with all the hard work and effort going into making improvement possible, the car’s suspension seems to get the biggest share among all the features. In fact, we test the car and see it ourselves that the sub SUV as a whole handles it smoothly and wonderfully on bumpy and cratered roads. Ford Ecosport 2018 is available with seven different colors, including: 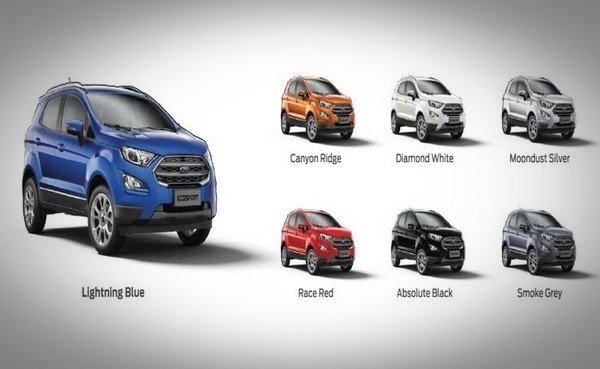 All of the colors of Ford Ecosport 2018

Given all the new embellishments and an up-to-date package of features, it definitely takes more than that for the most seasoned compact SUV to face the intense and surging competition coming from established rivals such as the praiseworthy Maruti Vitara Brezza and the Tata Nexon. Having that being said, Ford itself still gets the trump card up its sleeve, which is the robust and hardwearing 1-litre turbo-petrol engine despite the lack of the combo of the diesel engine with automatic transmission. A closer look to the Ford Ecosport 2018 Interior This article is going to provide you with a detailed comparison between the Hyundai Venue and its rivals in terms of their dimensions.

Ford Bronco and Family To Get Exclusive Showrooms

With the new Bronco arriving in US showroom mid-2021, Ford Dealers have requested the automaker to come up with designs for a separate Bronco showroom. Take a look at the pictures below of what they may look like.

Ford EcoSport SE is finally launched at the price of Rs 10.49 lakh. The new trim of the compact SUV comes with a unique design that set it apart from the regular version.

Used 2018 EcoSport 1.5 Petrol Titanium Plus AT for sale in New Delhi