Maruti has launched the mid-life facelift version of its popular premium sedan - Maruti Ciaz. The new Ciaz comes with a revamped exterior and improved performance. Let's find out what is new on this facelifted Ciaz.

The Maruti Ciaz is available in 14 variants in total.

Maruti Suzuki knows the exact way to satisfy the needs and desires of India customers. Maruti has got it right with almost every car it makes, and with the Maruti Ciaz, Maruti has once again confirmed its powerful brand name. The facelift Maruti Ciaz, a C-segment sedan, has successfully made its way to the top spots in the sales chart. Maruti Ciaz facelift is promised to bring in a new stylish look along with powerful performance. In this review, we will find out the charm of the Maruti Ciaz.

The facelifted Maruti Ciaz has undergone some alterations in terms of the exterior, especially in the front.

Maruti Ciaz facelift has gone under a slightly revised look. Overall, the Ciaz still inherits the core design features of the older version but gets some minor changes. For example, on the front face, the Ciaz sports a slim chrome grille flanked by the headlights. The blackout air dam is replaced with chrome accent. The fog light housings are also different, larger and of course, with chrome touch. It also gets LED highlights with DRLs and LEDs on the fog light units. Noticeably, the cut and ceases on the bonnet is strongly emphasized. Compared with the simple front, the new Maruti Ciaz is tuned for a sportier and more youthful appearance. 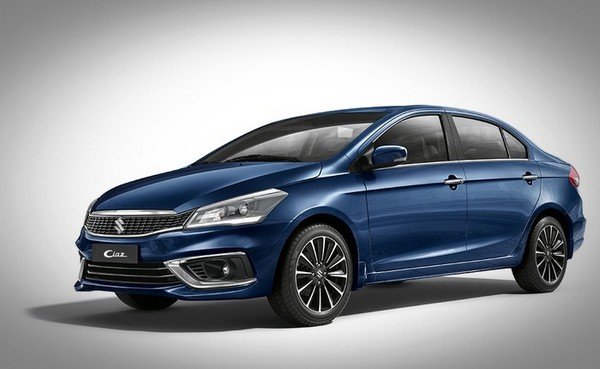 The Maruti Ciaz facelift mostly resembles the older version but gets some minor changes, especially on the front face.

To the side and rear of the new Ciaz, there aren’t as many twists as on the front. The sides of the Ciaz is almost the same except for the adoption of the new wheelset. On the top variant, Ciaz will come with 16-inch alloy wheels, and the lower variants get smaller 15-inch alloy wheel. The base variant only receives steel rims.

The rear keeps the same design except for the addition of chrome treatment on the rear fog light. What’s more, the newly-added LED headlights increase the premiumness for the exterior. 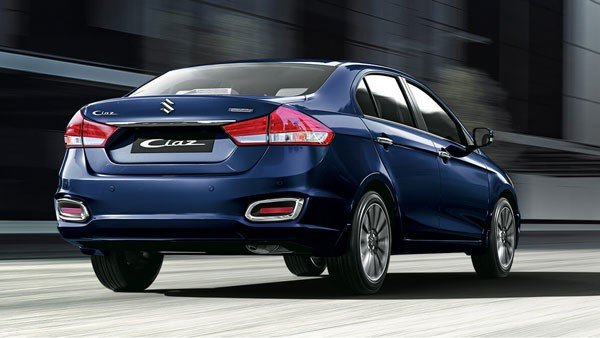 The side and the rear of new Maruti Ciaz is basically the same as in the previous model.

Refer to the table below for the Maruti detailed dimensions.

The Maruti Ciaz is 4,490mm long, 1,730 wide and 1,485 high with a 1,590 mm wheelbase and a 170 mm ground clearance. These large dimensions provide an amber space inside the cabin, which ensures the passengers a comfortable journey.

The Maruti Ciaz can provide seating space for up to 5 people. Space is one of the most unique selling points of the Ciaz which offers comfortable large front seats and a plush rear seat which could comfortably accommodate three people at best. Especially it feels ultra-comfortable with the ample legroom. The rear passengers will not be interrupted by the intruding centre console. Moreover, with a flat floor, it will allow them to find a good seating position. However, it would feel more pleasing with adjustable headrests which aren’t offered at the lower variants. Another downside of the seating is the not-so-good height support and cramped headroom. 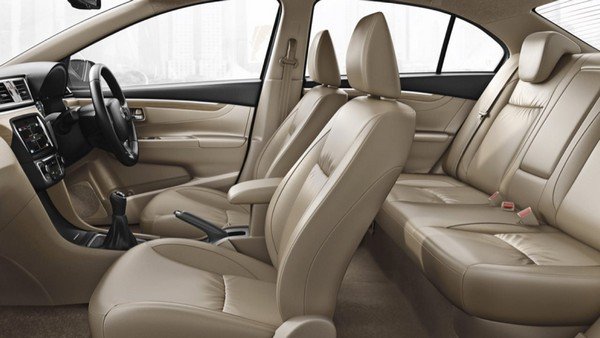 The interior of the Ciaz offers a comfortable space in both the front and rear row.

Coming to the new version of Maruti Ciaz, you can expect to see some new safety techs which include speed alarm and seatbelt reminder for the front passengers. With the speed alarm, you could not cross the 120 kmph without the alert ring blasting out. Besides, the Ciaz also offers ABS with EBD, dual front airbags, ISOFIX child seat mounts, keyless entry and reverse parking camera as standard across the range. It is a big disappointment that the Ciaz doesn’t offer six airbags as its rivals like Hyundai Verna and Honda City do.

Just like the outer appearance, the interior cabin keeps the same layout while integrating some small changes on the dashboard. The light colour theme will create a pleasing impression right at the first moment you step into the cabin. The new dashboard gets new faux wood treatment. At the centre console, you will find a new 7-inch touchscreen infotainment system. The best part is that this unit comes with Apple CarPlay, Android Auto and navigation function provided by MapMyIndia. On the instrument cluster, the 4.2-inch digital MID gets bigger in size, and surely more modern in style. This, apart from providing information on the power, torque and fuel mileage also shows how the Smart Hybrid system operates. The sad news is this unit could not be seen on the diesel variant. Other outstanding features of the Maruti Ciaz include rear AC vents, push-button start and autocruise, etc. 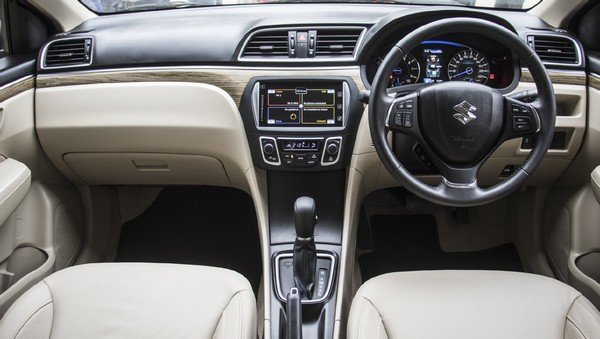 Maruti Ciaz keeps the same interior layout but puts some small twists on the dashboard. The facelifted Maruti Ciaz gets a 7-inch infotainment system.

One of the most noteworthy new addition to the facelifted Maruti Ciaz is the new 1.5-litre gasoline burner.

The petrol variants get a new engine which is the 1.5-litre, K15 petrol motor. This unit is paired with a 5-speed manual and a 4-speed automatic transmission. With the help of the lithium-ion battery from the SHVS, the petrol Ciaz could provide 105 PS of power and 138 Nm of torque. The engine feels most refined at the lower range with punchy performance, and as it passes 4000 RPM, it becomes less smooth, especially at the high range, the engine gets really vocal. The manual gearbox could work the engine for about 6500 RPM in the "L" and "2" gear. The gear shifting and clutch in the manual version works faster and responsive than the automatic version. It is obviously the manual that wins hands-down. 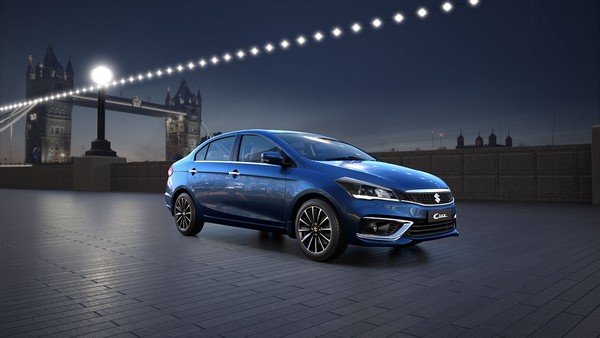 The petrol Ciaz gets power from 1.5-litre, K15 engine paired with both automatic and manual gearbox.

The new Maruti Ciaz also receives its power from two oil burners. Refer to the table below for a detailed presentation of the Maruti Ciaz diesel motors.

Maruti Ciaz continues to be powered by the 1.3-litre, DDiS diesel motor which could release 90 PS and 200 Nm. This engine comes most powerful at the mid-range and but below that point, turbo lags and engine noise is still evident. Furthermore, the new sedan also keeps under its hood a new 1.5-litre DDiS 225 oil burner which can generate 95 PS against 225 Nm.

The new Ciaz is given a reworked suspension system and the changes have really worked out on the new Ciaz. Now, the car could handle most of the road condition with confidence and compliance. The good ride quality makes the Ciaz an ideal pal on the bad roads of India. However, it comes at the expense of the handling. You can feel a considerable body rolls. Besides, the steering lacks response and feedback.

To get a closer look at how the Maruti Suzuki Ciaz 1.5 Diesel (DDiS 225) performs in real conditions, watch this video.

Fuel mileage is one of the most determining factors which influence the buyers' decision to buy a car since a decently fuel-efficient car helps the owner save a great amount of money in the long run.

The Maruti Ciaz gets help from the newly-added Smart Hybrid Vehicle System (SHVS) on all the petrol and select diesel variants which smartly help to improve the fuel consumption. In fact, Maruti Ciaz is among the most fuel-efficient models in the market. How does the SHVS bring in such fuel-efficient performance? The secret is that this tech will stop the engine if the car is at idle, store kinetic energy generated by braking.

Maruti Ciaz: Is it affordable?

The Maruti Ciaz is priced in the range from INR 8.2 lakh to INR 11.38 lakh (ex-showroom). Refer to the table below for a Maruti Ciaz detailed price list.

For such a well-equipped and fuel-efficient sedan like the Maruti Ciaz, this price range of really aggressive. This offers the Maruti Ciaz a clear advantage over its competitors in the Indian auto market. You can even have a wide range of used Maruti Ciaz at a much lower price to choose from on IndianAuto.

Maruti Ciaz Colours: How many options?

Verdict: Is Maruti Ciaz worth buying?

New Maruti Ciaz edges out most of its competitor with its unbeatably high mileage, not to mention its new posh look and ample interior space. It will be a good sedan for families with a high score on practicality. If you are interested in other Maruti new cars, pay a visit to IndianAuto.

New Maruti Ciaz 2018 vs Hyundai Verna: Which Car Is Best For You?

Maruti Ciaz and Hyundai Verna compete with each other in the segment of premium sedans. Which one is the better car that brings their customers with more benefits? Let's find out

Maruti is offering up to Rs 61,000 discounts with Ciaz. The premium sedan is powered by a 1.5-litre petrol engine.

Tesla has displayed the upcoming Cybertruck at the Peterson Automotive Museum in Los Angeles for one week. The production-spec trim of the pick-up truck will be offered in three different trim levels.

Maruti Suzuki has launched a new loyalty program for the existing customers. The main aim on the carmaker is to increase customer loyalty and its sales.