Launched just four months ago, the Hyundai Venue has surpassed the Maruti Vitara Brezza to become the best-selling compact SUV in India in July in August. This article is going to provide you with a detailed Hyundai Venue 1.0 vs 1.2 petrol comparison. Read on to discover.

Being two versions of the same car, the Hyundai Venue 1.0 and 1.2 petrol are similar to each other in terms of overall design and dimensions. Nevertheless, they differ from each other in quite many aspects. While the former is available in the higher-spec trims, i.e. S, SX, SX (O) and SX+, the latter is offered in only the two lowest-spec variants: E and S. The most remarkable distinction occurs to the engine and transmission while there is also a wide gap between two vehicles in terms of their features with the Hyundai 1.0 dominating its counterpart, thanks to its much wider and more advanced range of features. These differences of course lead to a distinction in prices of the two versions. To understand more about their similarities and differences, read our Hyundai Venue 1.0 Vs 1.2 Petrol comparison pos below for more details. The Hyundai Venue 1.0L dominates the 1.2L version in terms of the exterior features.

The Hyundai Venue features a contemporary exterior design with a strong stance. The SUV will not fail to attract the attention of any passers-by and will not look obsolete in the long run. Both of the Hyundai Venue 1.0 and 1.2 petrol have the same above design. Nevertheless, in terms of the features, they have both differences and similarities. Refer to the table below for a closer look at a comparison between the two versions’ features.

Hyundai is well-known for well-equipped vehicles. The Hyundai Venue is not an exception. Advertised as the first “Internet-on-the-go” SUV in India, the Hyundai Venue is equipped with a wide range of cutting-edge features right from the base variant. Specifically, it is also the first-ever car in the country to get equipped with the BlueLink system as a standard feature across all the trims. This setup offers both the driver and the passengers plenty of modern functions with 33 connectivity features, 10 in which are specifically developed for India.

Nevertheless, besides some standard features which are offered on all variants, there exist some distinct features between the two 1.0-litre and 1.2-litre petrol versions. The table below will help you figure out what are the similar and different features are. The 1.0L version of the Hyundai Venue has a much more modern cabin than the 1.2L one.

Both of the two versions measure 3,995 mm in length; 1,770 mm in width and 1,605 mm in height with a 2,500 mm wheelbase, a 190 mm ground clearance and a 350-litre boot space. When the Hyundai Venue was launched, it received many complaints about the small dimensions. However, when compared with its rivals in the Indian auto market, the Venue is on pars with most of them with just negligible differences. There is not much to expect from a sub-4-metre compact SUV with which the Indian second largest automaker aims to gain the tax benefits.

The most substantial discrepancy between the two versions lies in the engine and transmission. The 1.0-litre unit is a turbo petrol motor which can generate a maximum power of 120 PS and a peak torque of 172 Nm. On the other hand, the 1.2-litre unit is a naturally aspirated engine and can generate 83 PS against 115 Nm. So you can see that the 1.0-litre turbo unit can help the car have a much more impressive performance than its sibling. The Hyundai Venue 1.0L can deliver a much more impressive performance than its sibling.

While the transmission duties on the former are undertaken by a 6-speed MT or a 7-speed DCT unit, those on the latter are implemented by only a 5-speed MT. The manual and the manual versions of the Hyundai Venue 1.0 have a fuel mileage of 18.27 kmpl and 18.15 kmpl, respectively, which both exceeds that of the Venue 1.0 which is only 17.52 kmpl.

The dominating features and output of the Venue 1.0L lead to its higher price than the 1.2L version. While the former price ranges from INR 9.19 lakh to INR 12.34 lakh, which covers the four variants: S, SX, SX (O) and SX+, the latter is priced from INR 7.34 lakh for the E variant to INR 8.11 lakh for the S variant.

Overall, in all aspects, the Hyundai Venue 1.0 holds the winning position over the 1.2-litre version. It comes with a much longer and more advanced range of features along with more powerful engines and diverse transmission options than its sibling. All of these contribute to the higher price range of the former in comparison with the latter. Above is a detailed Hyundai Venue 1.0 vs 1.2 petrol comparison. Consider everything carefully before making any decision to purchase any of them. Hope that this comparison will help you make the best choice for yourself. 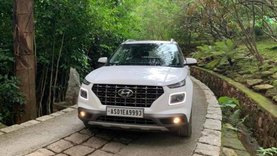