We wonder the upcoming Kia Seltos could fare against its big rival, Jeep Compass in the Indian auto market so we've worked on the detailed comparison of the two SUVs. Read on to find out which car is the better option for you.

The Kia Seltos is finally around the corner in the Indian market. The long-anticipated mid-size SUV is all set to go on sale on August 22 of the year that will pose a huge threat to the sales of some other models including the Tata Harrier, Mahindra XUV500, MG Hector and the premium Jeep Compass. After its official showcase held on June 20, the Kia Seltos has left a strong impression on the enthusiasts across the nation. With the introduction of Kia’s UVO smart connect technology, people believe that the Kia Seltos is coming with a shot in the arm to eat its competitors alive.

Though there’s still some time until the Kia Seltos launch due to happen on August 22, the Seltos is expected to be priced higher than the Hyundai Creta and will compete against the like of Jeep Compass. So how the new Kia Seltos challenges the Jeep Compass in the Indian auto space? Now we put the upcoming Kia Seltos in comparison with the Compass to see how far the younger SUV can go for against the best-selling Jeep SUV, on paper. 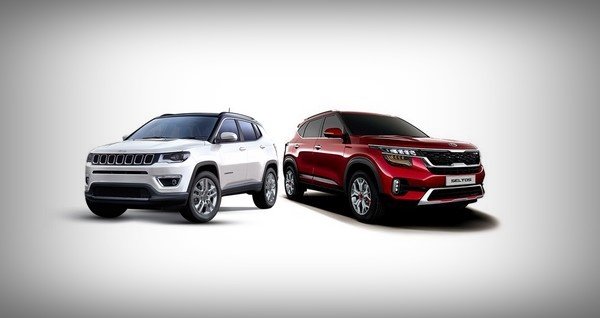 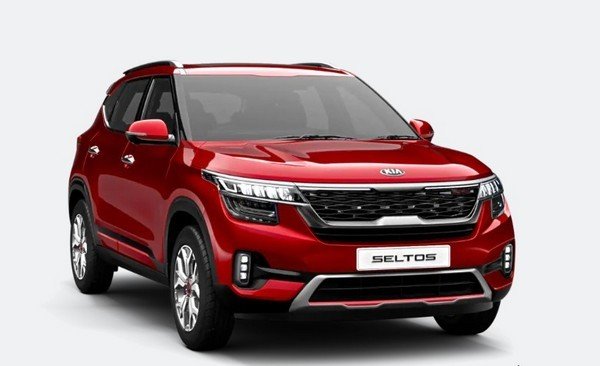 The Compass is slightly longer and wider than the Seltos by 80 mm and 18 mm, respectively. At 2,636 mm, the Compass’s wheelbase is also marginally longer than that of the Seltos by 26 mm. The Compass also offers 5 litres more boot space as against the 433-litre boot lit of the new Kia Seltos. The Jeep Compass measures 4,395 mm long, 1,818 mm wide and 1,640 mm height along with the wheelbase of 2,636 mm and as such, the difference between the two SUVs is not much. Let’s say, the Indian mid-size SUV market seems much crowded the last time around. Carmakers bring in more SUVs with many different distinctive styling cues, with an aim to win more customers’ hearts and the same goes for Kia Motor with the Seltos. Though the launch of the Kia Seltos is still a while away, the new SUV has created media hype thanks to the handsome exterior design it has. The Kia SUV is truly a head-turner with a sporty and rather aggressive look. Something that almost all onlookers are impressed by the Kia Seltos is its striking front facade. Standing out upfront is Kia’s iconic Tiger Nose grille with knurled-effect chrome garnishes, which is flanked by a set of sharp and stylish crown jewel headlamps. Besides, the ice cube-effect LED fog lamps, the heartbeat shape LED daytime running lights and squared-off wheel arches surely the make the Seltos an eye-catchy SUV. The side and rear profile of the Seltos are also up to date with its styling with the presence of 17-inch diamond-cut alloy wheels, rising beltline, heartbeat effect  LED taillights with a thick chrome bar at the back. On the other hand, the Jeep Compass is not a humble car when talking about the exterior look. It’s a Jeep thing. And if there is something highly attributed to the Compass’s success, it must be its solid build and premium look. It is a handsome and attractive SUV that is unmistakable for Jeep products. The front end of the Compass is dominated by a seven-slat grille, sporty bumpers with fog lamps, scuff plates and big air intake. The Jeep SUV also looks sporty and proportionate at the side and rear with flared wheel arches, strong shoulder line and LED wraparound tail lamps setup.

Overall, both these SUVs are scoring well in terms of appearance, but the Seltos looks better with its aggressive design philosophy. If you are a fan of Jeep and having a keen interest in traditional Jeep SUVs, the Compass is right there for you. Or else, in case you are enthusing the aggression and sportiness, the Kia Seltos should be a good option to start with.

In our Kia Seltos vs Jeep Compass comparison, this is where the forthcoming Kia car scores the most. Although the Jeep Compass is well-known for being quite premium, its cabin still looks less attractive as compared to that of the Seltos. Though Kia hasn’t disclosed all details of its all-new product, the leaked brochure of the Seltos has revealed plenty about what it has on the inside. The Seltos’s cabin is pretty generous with enough room at both front and rear and it appears to be top-class. 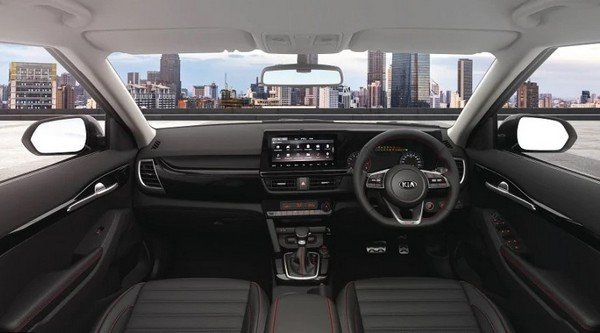 Being one of the highly connected SUVs entering India, the Kia Seltos is loaded to the gills with a long feature list, many of them are segment-first. Dominating the dashboard is a large 10.25-inch full HD touchscreen infotainment system which is compatible with Android Auto, Apple CarPlay and for the first time, it comes with Kia’s UVO connectivity suite. The UVO Smart connect comprises as many as 37 features which are classified into 5 different categories, namely Navigation, Convenience, Vehicle Management, Safety and Security and Remote Control. The juiciest features of the Seltos include a Smart HUD, 8-speaker Bose premium sound system, 360-degree camera view, ventilated and power seats, air purifier, power sunroof and more.

In a meanwhile, the Jeep Compass, albeit sitting at a convenient height, turns out to be a bit outdated in this part. The plain dashboard is somewhat a let-down when looking at the interior of the Jeep SUV.  Despite that, the premium offering from Jeep does offer a range of advanced features such as a 7-inch Uconnect touchscreen infotainment system with in-built navigation, Android Auto and Apple CarPlay, steering-mounted controls, power sunroof and some driving modes.

Quite obviously then, the Kia Seltos has everything on point to totally tower over the Compass on the technology and features front. Given its gorgeous design and cutting-edge technological bits, the all-new Kia Seltos deserves out thumbs up in this part of the competition.

While we haven’t got a chance to stay behind the wheel of the Kia Seltos, we have compiled things to compare it with the Jeep Compass to give you the brief idea of which car is wining this part, at least on paper.

The Kia’s petrol line-up includes a 1.5-litre 4-cylinder naturally aspirated engine making 115 HP/ 144 Nm and 1.4-litre 4-cylinder turbocharged petrol mill generating 140 HP of max power and 242 Nm of peak torque. Note that latter will be available with the Seltos GT Line trim only. For the diesel mill, the Kia Seltos is powered by a 1.5-litre 4-cylinder turbo-diesel motor making 115 HP/ 250 Nm of torque. Notably, the Kia Seltos offers various engine-transmission combinations thanks to the utilisation of 4 transmission options. It employs a 6-speed MT (standard for all mills), a CVT (for the 1.5-litre petrol), a 7-speed DCT (for the 1.4-litre turbo-petrol) and a 6-speed torque converter (for the 1.5-litre diesel unit). 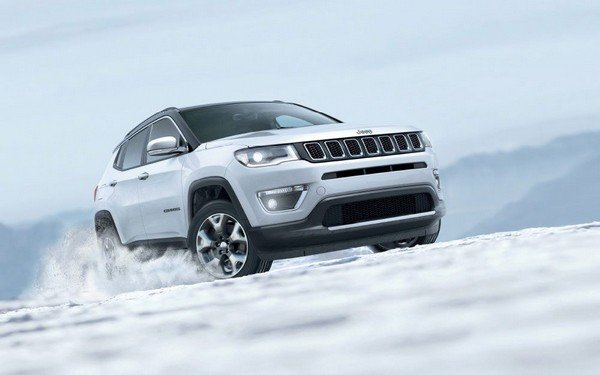 Whereas, like the MG Hector, the Jeep Compass is powered by a 1.4-litre gasoline motor good enough for 160 HP of max power and 250 Nm of peak torque, along with a peppy 2.0-litre diesel mill tuned for 171 HP/350 Nm of torque. These engines come paired with a standard 6-speed manual gearbox and an optional 7-speed DCT (exclusive to the diesel engine option). 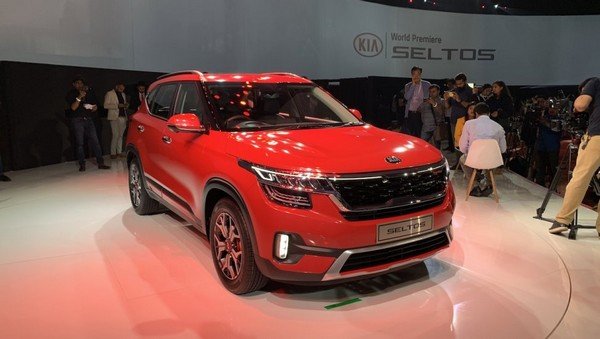 That is to say, though the Jeep Compass might be modest in terms of features and design, it turns out to be more aggressive in the performance and engine specs. Despite the real-world test drive of the Seltos is yet to happen, we can easily notice that the Jeep Compass is more powerful of the two, on the numbers perspectives. It is also worth noting that, Jeep has already introduced the top-spec variant of the Compass, the Compass Trailhawk, which is on offer with a BSVI-compliant version of the mighty 2.0-litre diesel engine and a 9-speed automatic transmission. We can expect this engine-transmission combo to make its way into the lower variants of the Compass sooner or later.

It’s until the Kia Seltos’s launch in August that we can know the prices of the new Kia Seltos. However, we can anticipate the SUV to launch at the price range of Rs 11-17 Lakh (estimated). At this price point, the all-new Seltos is having a huge competitive edge over the Jeep Compass which is currently positioned at around Rs 15-26.1 Lakh (ex-showroom, Delhi).

With a very premium attractive look, a host of advanced features and extremely “mouth-watering” price mark (expected), the Kia Seltos is definitely worth considering. Soon enough, we’ll have a chance to drive the new Seltos, hence stay tuned and keep yourself updated with our detailed review on IndianAuto. 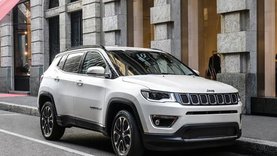 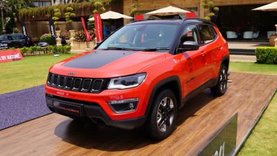