Mahindra XUV300 Vs Tata Nexon Vs Vitara Brezza: Which Is The Best Compact SUV?

The rise of the compact SUV segment has lured more models to enter this space. The latest car to join the segment is the Mahindra XUV300. Let's see how this new model stacks up against the class-leading Maruti Brezza and models like the Ford EcoSport and Tata Nexon.

The launch of Mahindra XUV300 should spice up the competition in the sub-four-meter compact SUV segment. Before the arrival of the XUV300, this segment used to comprise Mahindra Suzuki Vitara Brezza, Tata Nexon and Ford EcoSport. Here we will see how the new XUV300 fares against the two of the biggest names in its class, Maruti Brezza and Tata Nexon.

Mahindra Brezza has the outright look of an SUV. Everything about the styling of this car is just straight forward. From the prominent front face grille and the high-setting bonnet, it is the most SUVish car in the lot. Maruti has played it safe with a traditional and clean appearance. However, it might come with its downside: the design might turn out to be simple and too common. Maruti Brezza has the most SUV-like appearance in the lot

Unlike the Brezza, Tata Nexon takes more risk with its styling. The SUV is designed to be a head-turner. Tata Nexon continues to sport Tata’s new design language. On the side profile, just like some recent models by Tata, the Nexon sports the signature humanity line. Apart from that, Tata team also makes use of some nice touch like boomerang-like LED DRLs, aggressive headlights, and quirky-styled rear boot lid. The body of the Tata is carefully protected by plastic cladding to make it scratch-free. Interestingly, Tata gets a chic dual-tone exterior paint along with a styling white trim accent under the window and rear tailgate. Overall, Tata Nexon has a unique style which makes it really stand out from the rest.

Tata Nexon seems to look most impressive and unique of all

Now, with the newly arrived XUV300, Mahindra has added to a new flavour to the segment. Mahindra XUV300 takes many design clues from its premium counterpart, the XUV500. Its front face is butch with a horizontal slat grille with chrome highlight. On the lower part of the front profile, there is another horizontal patterned air dam, which, along with the upper front grille, creates an eye-pleasing parallel effect. The headlight lamps add a sleek element to the mixture.

Also read: Six Things To Know About The Mahindra XUV300 Mahindra XUV300 has a good-looking exterior

When compared to the interior of three models, Maruti Brezza has a clear advantage in terms of space. The Brezza has always known as one of the most spacious cars in the compact SUV segment. But when it comes to the visual appeal or the richness of features, the later-born Nexon and XUV300 edge out a bit. Tata Nexon’s interior design is more relevant and modern. Moreover, the Nexon is well-equipped with a load of features. Being the last to join the parade, Mahindra XUV300 is conscious that they have to get a better and more fulfilling feature package to pit against other rivals. Mahindra has packed the XUV300 with the latest technology. But there is still a lot of work needed to be done with the quality of the interior material. Mahindra XUV300 has the most up-to-date interior equipment

Tata Nexon is also a well-equipped option. It has a 6.5-inch touch infotainment system with Android Auto and Apple CarPlay connectivity, a Harman-sourced 8-speaker audio system, and multi-mode driving setting. Compared with other models, Tata's features list is missing out on cruise control. But one good note is its rear air vents, which is not available on the Nexon and Brezza.

Mahindra XUV300 comes as the most fully-loaded in terms of safety features. On the top-spec variant, it is equipped with seven airbags. It is also the first in the segment to get front parking sensors and full disc brakes. All three models get dual front airbags as standard, while only the entry-level XUV300 has the bonus ABS and EBD, ESP and hill hold control function.

The segment-leading Brezza comes exclusively with a 1.3-litre diesel motor. This engine is good for 90 PS of maximum power and 200 Nm of peak torque. Tata Nexon and XUV300 put forward a wider range of options with both diesel and petrol engine on offer.

Tata Nexon’s petrol motor is a 1.2-litre turbocharged unit that could produce 110PS/170Nm while the 1.5-litre D15 oil burner is good for 110PS/260Nm. A 6-speed manual gearbox comes as standard in both engine option. They also get an additional engine of 6-speed AMT transmission. Mahindra XUV300 is a holding the wild card of the most powerful engines it the segment. The XUV300 inherits these engines from the Marazzo. Its petrol engine is the 1.2-litre turbocharged unit that provides the power of 110PS and class-leading torque of 200Nm. The diesel version is powered by a 1.5-litre mill. After being tuned for the XUV300, this engine gets a drop in power output, from 123PS to 115PS. However, fortunately, the torque figure stays the same at 300Nm, which makes the XUV300 the torquiest car in the lot. On the transmission front, the XUV300 comes only with a 6-speed manual transmission and there is no automatic option. However, an electric version of the XUV300 will come in the next stage.

Maruti Brezza owns the highest mileage in the segment. Its only 1.3-litre diesel engine could return the fuel efficiency rate of 24.3 km/l. While Tata Nexon delivers 21.5 km/l and 17 km/l for the diesel and petrol engine, respectively. Mahindra XUV300’s diesel engine could return the mileage of 20kmpl and the petrol mill provide the mileage of 17kmpl.

In term of price, starting at 6.32 lakh and going up to 7.9 lakh, Tata Nexon proposes the most affordable option in the lot. On the other hand, Maruti Brezza and Mahindra XUV300 are pricier with the price gap of over 1 lakh. Mahindra XUV300, with its feature-rich offer, is the most expensive at the price range of Rs 7.9 lakh to Rs 11.99 lakh. The Brezza comes close with the price bracket from Rs 7.67 lakh to Rs 10.64 lakh. 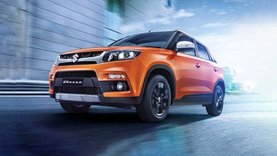