Maruti Swift AMT Vs Hyundai Grand I10 AT - Which Is The Better Option For You?

The article below is going to provide you with a detailed comparison between the automatic version of the Maruti Swift and the Hyundai Grand i10, two of the most popular hatchbacks in India.

Available in both petrol and diesel variants, Maruti Swift and Hyundai Grand i10 have been the top-selling hatchbacks in India for quite some time now. Both of the cars offer automatic gearbox options that help the driver take a much easier control of the vehicles, especially in city driving. Nevertheless, whereas the Swift transfers its power to the front wheels via an AMT gearbox, which stands for Automated Manual Transmission, the Grand i10 does so through a traditional torque converter automatic unit. Read on get a comprehensive comparison between the Maruti Swift AMT and the Hyundai Grand I10 AT to make a better decision as to which vehicle to buy. Maruti Swift AMT Vs Hyundai Grand i10 AT Design

This is where the two hatchbacks remarkably differ from each other. The Swift, over generations, still manages to maintain its sporty appearance with some segment-leading features such as auto projector LED headlamps with DRLs. Moreover, it has great potentialities for modifications. Thanks to the modern, fashionable appearance, it is a perfect hatchback for young customers. With a fashionable appearance, the Maruti Swift is suitable for young customers

The Hyundai Grand i10, on the other hand, is a car for a middle-aged family, owing to its bold tallboy stance and traditional appearance. As regards the exterior, its AT variant is equipped with some basic features such as adjustable headlights, electrically exterior rearview mirror, front fog lamps, etc. The Swift not only aroused a sporty feeling in terms of its exterior but also its interior as well. The interior and the dashboard comes with an all-black paint scheme. Some of the outstanding features of the vehicle include a flat-bottomed driving wheel, temperature control console and air conditioner vents. The red stripes on the tachometer dials and the speedo add to the sportiness of the vehicle. To make the vehicle even sportier, Maruti has avoided all the soft-touch materials to equip the car with hard plastics but with top-notch quality.

The front seats are properly contoured to provide sufficient support for the front passengers and maintain them in balance when the car is cornering. The Swift also offers a more amber boot than that on the Hyundai i10. The cabin is also considerably enlarged in the rear so that the customers can be provided with more head, knee and legroom and enjoy a pleasant journey. On the other hand, the Grand i10 emphasizes more on practicality than the cosmetics. It offers an airier cabin, which makes it easier for the passengers to get in and out of the car. Unlike the Swift which gets an all-black cabin of the Swift, the Grand i10 comes with a beige paint theme, which helps brighten up the cabin and contributes to its premium look.  It is also equipped with higher seating and wider greenhouse which assist the driver a lot when driving in the city.

The quality of plastics on the Hyundai Grand i10 feels better than the Swift, and the build of the former is also tougher than the latter. Nevertheless, the front seats are narrower than those of the Swift. Also, while the nonadjustable headrests can cause a nuisance to the tall drivers, the longer seat squab can receive complaints from the short drivers. The vehicle offers cosy rear seats with good backrest angle, but the leg and knee room is not as amber as the Swift. Maruti Swift AMT Vs Hyundai Grand i10 AT Specifications

The Maruti Swift dominates its rival in all aspects of dimensions, which means that it offers a much more roomy cabin. The Swift also comes with a more amber boot space than the Hyundai Grand i10.

The 1.2L K-Series petrol motor of the Swift can produce a maximum power of 82 PS and a peak torque of 113 Nm, equal to what are delivered by the 1.2L Kappa petrol engine of the Hyundai Grand i10. On the other hand, the 1.3L DDiS diesel motor of the Swift is good for 75 PS against 110 Nm.

While the Maruti Swift, in both petrol and diesel versions, is equipped with a 5-speed AMT gearbox, only the Hyundai Grand i10 petrol comes with a 4-speed torque converter AT unit, which gives the former a great advantage over the latter. AMTs used to be criticized about their slow response but the third-gen AMT on the Swift sourced from Magneti Marelli is as effective as the traditional ATs. Moreover, it is even simpler for the driver to maintain balance and for the car to ensure good fuel efficiency.

The Maruti Swift AMT diesel can deliver an ARAI-certified fuel efficiency of 28.4 kmpl, which makes it the most fuel economical car in India. The petrol motor has a mileage of 22 kmpl, more than that of the Hyundai Grand i10 by nearly three kmpl. In the comparison of the performance, the Swift AMT is the winner because of its better mileage

Maruti Swift AMT Vs Hyundai Grand i10 AT Price

Nevertheless, at present, the Hyundai Grand i10 is offered with generous discounts, which translates into a smaller price than the Maruti Swift.

Maruti Swift AMT Vs Hyundai Grand i10 AT Conclusion

Whether the Swift or the Grand i10 is the winner in this comparison depends on personal taste. While the former, with a sporty design, is more suitable for young customers, the latter, with an airier and practical cabin, is a perfect choice for middle-aged auto buyers. However, we would highly recommend the Swift because of the much wider range of features that it offers

In terms of proportions, it is clear that Swift is the winner since it dominates its rival in all dimensions. The Swift also wins the comparison in performance with the automatic transmission available in both petrol and diesel variants and better mileage.

While the Maruti Swift is slightly cheaper than the Hyundai Grand i10, the generous discount offered on the latter makes it more affordable than the former.

All in all, the decision on which vehicle to purchase entirely depends on you, your tastes and demands. If you are looking for a car which has a fashionable design, automatic transmission on both petrol and diesel motors with decent mileage, go for the Maruti Swift. On the other hand, if you are on a quite limited budget, prefer a car with a more traditional design and put the priority on practicality over design, the Hyundai Grand i10 is the perfect choice for you. 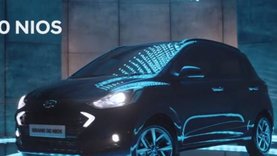