Datsun has expanded its Go and Go+ lineup with new CVT versions of both models. Here is our detailed review of what we thought of these brand-new addition to Datsun's Indian lineup.

Datsun entered the Indian auto market in 2014 with the expectation to gain back popularity in emerging markets by providing more affordable alternatives to Nissan models after almost three decades of absence. With India being its main focus, the Datsun brand was brought back here before expanding to other markets like South Africa, Russia and Indonesia.

The Go and the Go+, its 7-seater MPV sibling, have been the flagship models of the Japanese automaker in the Indian auto market. The entry-level hatchback used to be a popular vehicle with the Indian auto buyers before the Datsun redi-GO came to the country in the middle of 2015 with a much more affordable price. After its four-year presence in the market, a thorough update was given to the Datsun Go in October last year with considerable updates inside-out.

One year has passed since the facelifted Go was launched and expanding its lineup, Datsun has now launched the new Go with the benefit of a CVT unit. The Go is competitively priced to become the most affordable CVT model in the country. Generally, Datsun is expected to follow Nissan's example in introducing the CVT version with the Micra XL in order to increase its competitiveness against its rivals.

The exterior of the CVT versions of the Datsun Go are practically identical to the updated model introduced last year, apart from the new rear spoiler, which will also be available in the manual versions of the car from now on. At the front, the hexagonal grille gets chrome inserts, sharp headlights with vertically positioned LED DRLs and body-coloured bumpers are some of the exterior highlights which have been carried over from the manual versions. Likewise, the side profile of the vehicle looks compact with some outstanding features including silver-finished roof rails and 14-inch diamond-cut alloy rims. The Datsun Go experiences almost no changes in terms of their exterior design in comparison with their manual counterparts.

The Go CVT continues to feature a steering wheel with silver accents, a centre console with a piano black finish, blacked-out instrument panel, four power windows, black fabric seat coverings and faux carbon fibre trim around the cabin. The triple-pod semi-digital instrument cluster which houses the digital MID provides the driver with the clear and concise information. Having said that, the most notable interior feature of the Go vehicle is the inclusion of a 7-inch touchscreen infotainment system which supports HD playback, voice recognition, Bluetooth and Android Auto and Apple CarPlay connectivity. While there is a lag in functionality, it is more seamless than many other systems in the market, some of which come in cars worth three times as much. Apart from a touchscreen interface, it also comes with physical buttons for voice commands and volume control, which makes it easier to be operated while driving. The Datsun Go get a similar range of interior features to the manual version.

In the updated version of the Datsun Go is the structural integrity has been enhanced in the front, side profile and roof, in order to help the car comply with the stricter pedestrian protection and side crash standards coming into play. However, these improvements have played their hand in increasing kerb weight of both cars by 40kg across all the variants.

The updated, safer version of the hatchback ensure that both the driver and the passengers are safer thanks to a wide range of safety features on offer. These include dual airbags, ABS with EBD, speed alerts at 80kmph and 120kmph, front seatbelt reminder, emergency brake assist and a particularly a segment-first vehicle dynamic control. The last feature will not only avoid accidents but will also help boost confidence when driving in a spirited manner.

The Datsun Go CTV continues to be powered by the tried-and-tested 1.2-litre HR12 DE naturally-aspirated DOHC petrol unit which can deliver a maximum power of 67 BHP against a peak torque of 104 Nm at 4,400 rpm. Now, along with the manual gearbox, a 5-speed CVT has also been added. Official ARAI-rated fuel efficiency figure for the CVT variants are 20.07 kmpl, which is really impressive. While its rival in the same segment is adopting the use of conventional AMT units, Datsun has equipped its two new Go hatchback with a Continuously Variable Transmission which offers a smoother journey thanks to its lag-free performance. The use of a CVT also helps improve the overall ride quality of the two models. Not only that, compared to the use of budget-friendly AMT unit, the CVT helps with lower NVH level, smoother shifts and easier launches from stand-still in hilly conditions as compared to the use of an MT or AMT unit.

Furthermore, the CVT also brings about the benefit of convenience, particularly in traffic jams. Unlike a traditional AMT, you do not feel the CVT gearbox shifting through gears when you shift into drive or start building up speeds. Nevertheless, while you can feel the immediacy with the throttle at lower rpms, all of it tapers off around the 5,000rpm mark. The brake and suspension systems remain similar to the updated versions Go and Go+ which we saw last year. The brakes are more progressive, though they lack a positing initial bite and the suspension, is comfortable and did its best to cosset us in comfort no matter what situation we put it in. 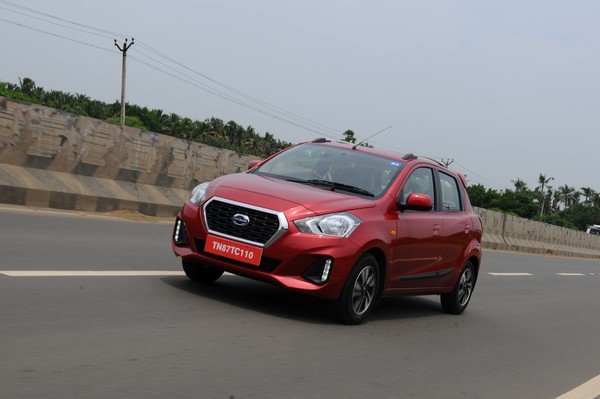 The CVT unit offers the Datsun Go a smoother and comfortable journey.

Since the Datsun Go CVT is aimed to be the most affordable CVT-equipped hatchback in the Indian auto market, it is very aggressively priced, at INR 5.94 lakh. At this price tag, the Datsun hatchback can gain a clear benefit over other CVT-equipped cars in the market like the Honda Jazz, the Hyundai i20, the Maruti Baleno and the Nissan Micra.

Despite almost no alterations in terms of design and dimensions, the Datsun Go has carved out a clear niche for itself in terms of the ride, handling and driveability department, when compared to their manual counterparts. With an affordable price and the convenience which the CVT unit, these two vehicles will surely increase their standing against AMT-equipped rivals such as the Tata Tiago, the Hyundai Santro and the Maruti Wagon R. 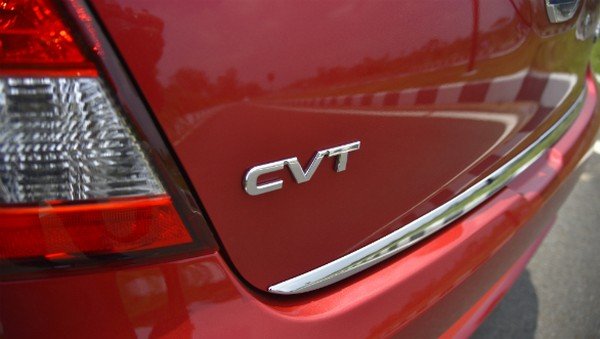 The Datsun Go CVT will gain a clear advantage over other AMT-equipped rivals, thanks to the superior convenience that they offer.

The Datsun Go and also the Datsun Go Plus the Japanese auto manufacturer have been considerably updated since their first launch in the country. With a more powerful motor, the addition of a CVT unit, decent space and comfort along with an impressive safety features ist, the Datsun Go and Go+ have become a more wholesome and attractive options for the Indian auto customers.

Here is our detailed first drive review video of the Datsun Go and Go+ CVT variants :

Here is the review of the newly-launched 2018 Datsun GO and GO+ which now employs some subtle visual and feature upgrades. Moreover, both the cars still gets powered by the same 1.2-litre petrol mill.

BS6 Datsun GO and GO Plus Details Revealed Ahead of Launch

Datsun GO and Datsun GO Plus will be introduced under the BSVI form soon. Details of the upcoming models are revealed.