Finally, the 2018 Datsun redi-GO has received an AMT model in its variant lineup. But how does it help the redi-GO capture a bigger share of the market? Read on to find out.

First launched in June 2016, the Datsun redi-GO has become one of the fastest-selling models for Nissan India. However, the redi-GO runabout was still off the pace in the competition with its primary market rivals Maruti Alto and Renault Kwid regarding the sales performance. As you may know that the Datsun redi-GO share a lot in common with the Renault Kwid from the same platform to a bunch of mechanical bits, though each car has its own cosmetic distinctions but still fail to keep pace with fast-selling Renault's offering. And when considering the initial engine lineup of the redi-GO, which seems like, evidently, quite a boring package, the company did find a way out.

While its sibling (and also its rival) Renault Kwid had become a front-runner with an AMT option in the entry-level lineup, the redi-GO stills got stuck with the same 0.8-litre BRO8 engine and a 1.0-litre BRO unit at that time. Hence, to keep pace with the fast-paced competition as well as follow the successful footsteps of the Renault sibling, it was only about a matter of time that Datsun added an AMT version of Redi-GO in the variants lineup and then it came, in actually, the Datsun redi-GO 1.0-litre AMT. At launch, Datsun promised that the brand new redi-GO AMT would become India's best-priced and most feature-rich AMT hatchback ever. Is that true? To discover the new member of the redi-GO family more, we took the new version out there for a short spin and then we came back, totally impressed with what the car had to offer.

Are there any visual changes over the standard redi-GO?

The answer is No. Seem like Datsun are quite satisfied with the designs of the regular redi-GO and it shifts more focuses at the driving fun instead.

That's why, from the visual standpoint, the Datsun redi-GO AMT looks identical to the standard 1.0-litre variant which was launched back in July 2017. It inherits all the muscular quirky design elements from the standard model and even the car did not find a need to get any badge on the exterior or something elsewhere to distinguish it from the regular model. Interestingly, there is a single “1.0 badge” on the boot lid of the car to set itself apart from the smaller 779 cc variant and that’s all. It’s only inside the cabin where the gear lever denotes that this one is the long-anticipated automatic redi-GO variant. For this, we expect that Datsun should have done more slightly, like some styling bits to spice things up as the French arch competitor, Renault had done with the 1.0-litre version of Renault Kwid.

How does it look on the inside?

Similar to the exteriors, the cabin layout of the new Datsun redi-Go AMT variant remains the almost same as the 2017 redi-GO 1.0-litre version, except for some AMT-specific changes. Unlike the Renault Kwid AMT which is available with a rotary dial gear shift knob, the redi-GO uses a floor-mounted conventional stick-type gear lever unit hailed from the Duster AMT. 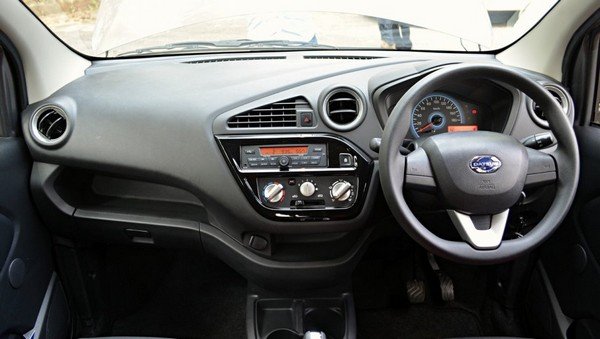 Since the interior quality is not the vehicle’s core strength, the interiors of the 2018 redi-GO AMT carries an all-black theme which has done a good job to conceal all the imperfections on the inside. The redi-GO 1.0-litre AMT retains the same all-black dashboard with silver highlights from the 0.8-litre redi-GO Sport and the 1.0-litre manual version as well. This dash looks way better than the outgoing grey unit available before. The car is equipped with a new audio system which supports Bluetooth phone connectivity and audio playback, the same go for the 1.0-litre Gold and 0.8-litre Sport editions.

Besides, the new Datsun hatchback employs quite a different multi-information display which gets a new gear position indicator- necessary info for automatics- but misses out on the tachometer. The keyless entry or central locking system are all identical to the redi-GO 1.0-litre manual version.

Is it fun to drive?

While the congestion has been more and more increasing in the country, travelling around the city roads is no longer an enjoyable experience any more. People now turn out to be completely stressful in the city commute, especially during the rush hours when they have to shift the gear constantly in the bumper-to-bumper traffic. Therefore, automatic cars truly become a thing in need. Fortunately, the all-new automatic Datsun redi-GO has come in town to fulfil many people's crying needs.

It is known that the all-new Datsun redi-GO AMT variant is packed with a 1.0-litre i-SAT three-cylinder petrol engine making a max power of 68 PS at 5,500 rpm and 91 Nm of peak torque at 4,250 rpm. A 5-speed automated manual gearbox takes over the transmission duties for the Datsun hatchback. We took the car for a short drive in a batch of city, highway and slightly hilly patches that gave us a good chance to find out more how the redi-GO AMT reacts in almost every driving conditions. On the intercity commutes, the automated manual redi-GO impressed us with its refinement of gear changes. The gearshifts are smooth while the irritating “head-nod” which is typically associated with AMTs is virtually non-existent on the gentle move. However, in a more aggressive mode, that kind of hiccups between gearshifts will become more noticeable. Excitingly, the redi-GO gets a creep function or as Datsun like to say, the “Rush Hour mode”, albeit unusually slow, it does help the car to crawl forwards well without applying the accelerator, just like the regular automatic cars. Hence in the stop-and-go traffic, it could be very of help since you mostly just need to use the brake instead of both to keep the car going. Else, it is also very enjoyable to take the foot off the brake pedal and your car will continue to move forward at around 5-6 kmph. The Datsun redi-GO also offers a manual mode which is given a miss on the premium Renault Kwid sibling, though sharing the same AMT version. Wonder how a small car cope with uphill or lunatic driving? Here you’ve found the right stop to know. We took the redi-GO AMT to experience some bit of uphill and the 5-speed AMT did struggle to calm itself. But hardly never does it become a deal-breaker for the AMTs fanatics.

The light steering should make you feel like you’re dancing on the dashboard by making the twirls with short turning radius which, without doubts, makes the redi-GO AMT a breeze to drive. However, starting at the three-digit speeds, the steering wheel shows a clear disconnect with the front wheels, which may discourage our dear drivers sometimes. Note though, that the ride quality is still firm overall and the car still manages to crash over the rough roads brilliantly.

Is it value for money?

The introduction of an automated manual transmission should always jack the costs up for a considerable margin as compared the manual ones. However, Datsun comes to hand over its prospective buyers yet another big reason to take this car into consideration. At the price starting from Rs 3,80,600 (ex-showroom, Delhi), the AMT-equipped Datsun redi-GO costs just around Rs 18,000 more than the manual variants. Besides, it is an oddly-styled spacious car for its compact size and a very user-friendly runabout for its high stance, too. Standing right underneath the Renault Kwid, the Datsun redi-GO should be one of the most economical cars with a 1.0-litre AMT unit in the segment. It even defeats the Alto K10 AMT which is currently positioned at around Rs 4.53 Lakh (ex-showroom, Delhi). Though being a bit late to the party, the redi-GO is still a great appeal in the segment that offers everything that buyers are looking for- style, space and easy driving. From these, we would strongly recommend the redi-GO AMT over the manual model for the intra-city commutes. It should be one of the sweetest deals ever!

Datsun redi-GO 2018 will be the right choice if you are looking for a new hatchback with a limited budget. Featured a rich list of features, the redi-GO rises as the next potential player in the segment.

Datsun redi-GO is available with some heavy discounts, which are equal to the sum of road tax and insurance premium. Read here for more details.