Here is the review of the newly-launched 2018 Datsun GO and GO+ which now employs some subtle visual and feature upgrades. Moreover, both the cars still gets powered by the same 1.2-litre petrol mill.

Datsun Go and GO+ first launched in the year 2013 and 2014. In 2018 Datsun updated the GO and GO+ with some visual tweaks on the outside and inside to offer more value for money package. Currently, Datsun offers only three cars into the Indian market- Redi-GO, GO and GO+. The all-new 2018 models get new design and styling, safety and comfort and convenience features. Datsun GO rubs competes against the likes of the Tata Tiago, Hyundai Santro and Maruti Suzuki Alto K10. On the other hand, the GO+ is the most affordable 7-seater car into the market which does not have any direct competitor right now. We recently got our hands on both the cars, so here is the first drive review about what we think of both these recently launched facelifted cars. 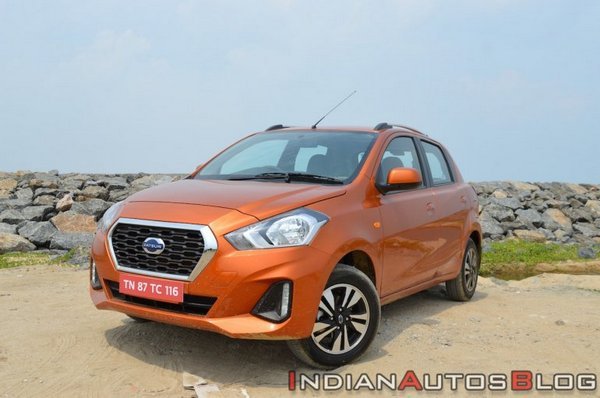 The all-new 2018 models get new design and styling, safety and comfort and convenience features.

The new 2018 Datsun GO and GO+ look much more engaging than its predecessor which looks like an everyday commuter. Up front, they employ a new hexagonal grille that is wider and has a unique mesh design. Illumination duties in the 2018 models are done by conventional headlamp unit along with vertical LED DRLs which comes embedded into a blacked out insert. On the side, the new models replace the steel wheels with stylish 14-inch diamond-cut alloy wheels which look quite sporty. Moreover, it also offers body coloured door handles along with body coloured side mirrors. The cars look aggressive with the employment of a bold shoulder line and silver coloured roof rails.

The rear of the car employs a new bumper which is well sized and looks muscular. The rear bumper of the GO mimics the C-shaped outer-ends of the front piece. On the other hand, the rear bumper of GO+ gets the black insert in shape similar to that of the LED DRL housing. The premium quotient of both models enhanced with the equipment of chrome license plate garnish. The 2018 Datsun GO offered with new “Amber Orange” colour shade that complements the car’s modern design. The Datsun GO+ retailed with a new “Sun Stone Brown” colour which signifies the adventurous nature of the MPV. Dimensionally, the Datsun GO and GO+ is 3788/3994 mm long, 1636 mm wide, 1507 mm in height and have a wheelbase of 2450mm.

On the inside, Datsun has redesigned dashboard and the upper portion of the centre console. Moreover, the rectangular A/C vents replaced by circular ones. The faux carbon fibre inserts on the centre console and dashboard enhance the overall appeal of the cabin. Faux leather seats with some orange inserts are quite exclusive as it makes the Amber Orange-finished car look desirable on the inside too. Sadly, that’s not a part of the regular equipment even in the top of the line variant. The GO+ also gets an exclusive feature like a dual-tone white and black dashboard. The new 2018 Datsun GO and GO+ look much more engaging than its predecessor which looks like an everyday commuter.

Datsun has also updated the new GO and GO+ in term of Comfort and Convenience. Many car makers now offer front to rear micro antenna and shark-fin antenna for enhanced styling instead of long pole antenna. Datsun’s cost-cutting practice for the GO series involved no antenna at all originally. A newly introduced touchscreen system now handles infotainment needs. The car employs a 7-inch touchscreen system which comes compatible with Apple Car Play and Android Auto, and that’s a segment-first feature. In operation, the infotainment system is quick and smooth. But, the cars miss out steering mounted control which makes accessing the infotainment console quite effortless. Moreover, both the GO models now employs features like rear wiper and washer, rear power windows and electrically tractable ORVMs. The air conditioner works well in chilling out the car's cabin in no time. The car employs a 7-inch touchscreen system which comes compatible with Apple Car Play and Android Auto, and that’s a segment-first feature.

The front seats provide a sufficient amount of side support and under-thigh support. But the second row of seats in the GO and GO+ could be better as its quite uncomfortable for long distance journeys. The third row of seats in the GO+ is only recommended for children. The integrated headrests are uncomfortable as a passenger is not able to adjust it as per his convenience. The Datsun GO provides a boot space of 265-litres while the GO+ provides a luggage space of 347-litres. But, they lack side pockets to keep bottles and stuff. Moreover, the connected front seats replaced by the individual front seats, freeing up space in the centre for a floor console. That's why the car now gets two additional cup holders in the front. The instrument cluster in GO models offers an analogue tachometer and speedometer along with with a small digital display which provides information regarding fuel, distance covered and trip meter. Datsun has redesigned dashboard and the upper portion of the centre console. Moreover, the rectangular A/C vents replaced by circular ones.

Mechanically, both the Datsun models the GO and GO+ remain unchanged. They get propelled by the same HR12DE 1.2-litre petrol engine which is good at churning out respective power and torque outputs of 68 PS at 5,000 rpm and 104 Nm at 4,000 rpm. Transmission duties are done by a 5-speed manual gearbox as standard and, we may expect both the cars to come up with an AMT gearbox in the near future. The suspension system comprises of a McPherson Strut with Lower Transverse link up front along with Twist beam suspension with coil spring at the rear. Braking job is done by disc brakes at the front and drum brakes at the rear. Datsun GO is more fun to drive because it has a compact design and lightweight body which weighs around 819-846 kg, kerb.

The motor is redlined at 5200 rpm, but that said it has got quite some torque at the low end which makes the car excellent for drives in the city. One may feel vibrations while pulling away from standstill to motion in bumper-to-bumper traffic. The suspension system is a bit towards the harder side which makes it a genuine handler while not negotiating on convenience. The steering unit is pleasant as well offering a magnificent drive quality. The Datsun GO and GO+ feel light to drive and agile enough for Indian roads conditions, all thanks to the best in class 4.6-metre turning radius. At initial stages, the engine feels a bit mild but, after crossing the 2000rpm mark, the motor comes into action. Countering the bad road conditions is quite effortless as both the models offer 180-mm class-leading ground clearance.

Datsun GO is more fun to drive because it has a compact design and lightweight body which weighs around 819-846 kg, kerb. Countering the bad road conditions is quite effortless as both the models offer 180-mm class-leading ground clearance. As we've told you earlier that both the models now replace the 13-inch steel wheels with 14-inch alloy wheels, which come wrapped in 165/70 R14 tyres (old models: 155/70 R13 tyres) which looks good and provides a good amount of road grip. But, Datsun really needs to work on the softening the gearshifts. Moreover, the shift knob rotates easily and, it becomes a point of confusion sometimes. The old version of the Datsun GO and GO+ provides a mileage of 20.63 km/l and 19.44 km/l respectively. On the other hand, the new models rated for 19.83 km/l of mileage.

With the equipment of new looks along with updated features, the Datsun GO and GO+ have become a value for money cars. Both the car is now more refined, practical and safer than before. The GO and GO+ retailed at a price tag of Rs 3.29 lakh and Rs 3.83 lakh (ex-showroom, India) respectively. The GO compete against the likes Tata Tiago which retails at Rs 3.40 lakh (ex-showroom Delhi). There's no direct competition for the GO+, but not for long as Renault is planning to launch its new MPV which is named as Triber. Moreover, Datsun also provides a 2-year standard unlimited kilometre warranty for those who love to clock down long journeys in their cars. Datsun GO and GO+ are being offered in five different variants namely D, A, A(O), T and T(O).

BS6 Datsun GO and GO Plus Details Revealed Ahead of Launch

Datsun GO and Datsun GO Plus will be introduced under the BSVI form soon. Details of the upcoming models are revealed.

CONSIDER BUYING A USED CAR?View all

Used 2015 Elantra SX AT for sale in Ahmedabad

Used 2015 i20 Sportz Option for sale in Ahmedabad