In October, we have welcomed many new car models. Some are all-new, some are quite familiar to us all. Among which, Santro seems to take the spotlight for its comeback under a whole new form after years. Besides, in the same segment, there is also another name to return with the latest updates. It’s Datsun GO. Both of the Santro and Datsun GO are available at appealing prices along with attractive offers. On the following review, we will look into each car’s exterior, interior and engine and features to find out which one gains more advantages over the other. Compared to Hyundai Santro, Datsun GO is greater in length but falls behind in terms of height

At 1560mm, it is taller than most of the outgoing hatchbacks including the Datsun GO. The reason is that the Santro inherits the tallboy gene from its predecessor. This characteristic has once made a case for the Santro, therefore, there is no reason to drop that out in the new Santro.

How do these dimensions translate into real life? Yes, it would mean that the Datsun will have the advantage of better legroom. But when it comes to the headroom, it seems that the Santro will edge out the GO.

What’s more, the Datsun GO is also the winner in terms of boot space. It owns a 265-litre boot, while the Santro only has a small cargo space of 235 litres. It means that you can strain the boot to load more luggage in the Datsun GO than in the Santro.

Both of the cars sit in the segment of compact hatchbacks. However, while the Santro stays in line with the conventional look, the Datsun GO opts out for a more SUV-like appearance. Datsun GO looks sporty and youthful with many SUV-ish characteristics

On the other hands, the Santro gets familiar hatchback look with small twists to differentiate itself from the rest. On the front face, it is easy to notice that Santro gets a high-set fog light, almost right under the headlight. What’s more, unlike other cars, it has the fog light and grille merging together, creating one imposing cascading unit on the front profile. 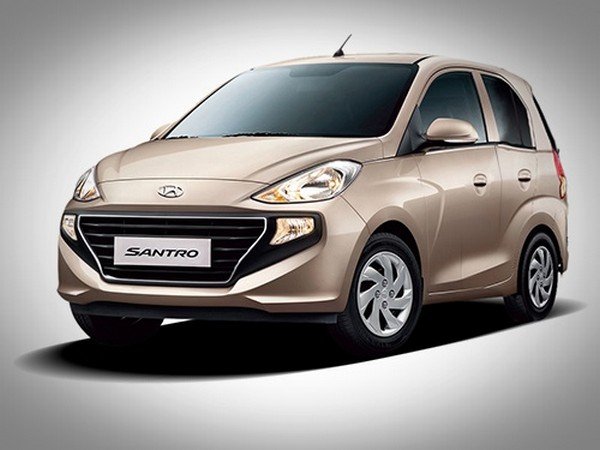 Hyundai Santro looks like a familiar hatchback but with some twists to stand out from the rest.

If you prefer a sporty look, it is the Datsun GO that will fit your taste. But the maturity and calm vibe are what you need, then Santro will be a good option for you.

Hyundai Santro’s unit could release 69PS of power and 99Nm of torque. On the other hand, Datsun GO, even though having a larger engine, is able to make 68Nm and 104Nm at best. Hyundai Santro with a 4-cylinder petrol engine might have an edge over Datsun GO on this.

Another bonus point for the Santro comes with both manual and automatic gearbox whereas the Datsun GO only gets a 5-speed manual transmission system. Santro also offers CNG version which the Datsun doesn’t have.

In terms of the fuel efficiency, Santro claims a slightly higher mileage than the Datsun GO.

Here is the price list of Hyundai Santro and Datsun GO:

Datsun only offers three variants for the GO, while the Hyundai Santro comes in with a longer offer range. It is available in five variants, together with the added trims, there are five options for you to choose from. The price ranges from 3.9 lakh to 5.65 lakh, while the Datsun GO’s price starts from 3.29 lakh and goes up to 4.89 lakh.

Datsun GO starts at a lower price than the Hyundai Santro. But coming to the next variant, it comes close to the base variant of the Santro. The top-end variant of the Datsun GO matches with Santro’s second to the highest variants (without automatic or CNG option). And the top-spec of the Santro is just well beyond the price range of the Datsun GO.

Here, we have picked out the closest pair from the two models to have a better choice considering your budget.

Hyundai Santro promises a feature-rich package. And they don’t disappoint us. Right from the base variant, it is packed with goodies like ABS with EBD along with driver bag. The Datsun GO is also known for being well-equipped. These two variants meet at some offers, such as:

At this price range, it is the GO that wins. It is packed with better safety features and comfort functions.

Besides what is offered on the lower variants pair, the Era and GO A (O) also share some added features:

In this category, the GO A(O) will continue to indulge with a lavish offer of features:

Even packed with so many convenience features, it still lacks one important thing – it is the rear AC vent. That is also the one feature that Santro Era has over the GO A(O).

From this table, it is clear that the GO T is one step ahead of the Magna as it offers many desirable features, including an advanced and fully-equipped infotainment system.

At this point, we will put out the top-end GO variants to fare against the next-to-top variant on the Santro.

At this price, the Santro has improved a lot with many added features, including the touchscreen infotainment display along with Android Auto and Apple CarPlay support. However, it still loses out to the GO T(O) as it lacks some key features like passenger airbag, rear parking sensors, alloy wheels. 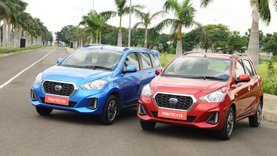