Renault Duster received a facelift last year and witnesses positive responses from car buyers ever since it's launched in India. What adds to the design, dimensions, features, specs, etc. of the new Duster? We'll find out.

Renault Duster, mostly known as an adept Europe-centric SUV, was the brand’s huge success story initially. In the beginnings, the Duster actually took the Indian market by storm for being one of the first-ever compact SUVs for India. Along with the Ford Ecosport, the Renault Duster was the attractively-priced SUV that was also loaded with features that the Indians hadn’t previously seen in the earlier segment. It is not an exacerbation to say that the Duster came to steal the limelight of the bare-bones like Mahindra Bolero and Tata Sumo and marked the new era of affordable UVs in India.

However, that’s the picture of the Duster in its heyday that most of us just can recall in retrospect. The Duster has aged much in the ever-increasing competition of its segment. Renault has made its great attempts over the years indeed, to keep the Duster fresh and competitive enough to catch up with the fast pace of the game where Hyundai Creta, MG Hector, Kia Seltos is taking the lead. In its time span, the Renault Duster has experienced a host of updates, and the latest set of styling tweaks has made it to our country in July 2019. Is it fresh and competitive enough to up the game level? We’ll find out.

Until now, the Renault Duster comes in a choice of three trims – RXE, RXS and RXZ making nine variants as follows:

In fact, one of the main attribution to the Duster’s initial successful launch was upon its exterior package. Back when the first Duster rolled out from the company’s production line, it came off as quite a looker with a dominating stance, high-set bonnet and massive wheel arches. The formula for success has been kept in the Duster for quite a long time that’s why the French carmaker never makes massive alterations to the exterior design of the Duster despite having made several upgrades to the SUV overtimes. However, the Duster started to enter its advanced age in recent years, forcing the carmaker to bring the Duster some nips and tucks. While retaining the chunky shape of the older versions, the 2019 Renault Duster comes with some styling tweaks on the outside as of the company’s effort to spruce up things around the car and hide the Renault car’s vintage.

The major cosmetic updates to the Duster are made at the front for both better visual appeal and new safety norms compliance as well. The bonnet has been revamped pretty well with the bonnet line being raised to meet the newest pedestrian protection standards. The flat surface of the bonnet has been removed making way for the more contoured panel. The refreshed front bumper features a new faux skid plate along with large blacked-out fog lamps housings. It feels fresh and aggressive enough in terms of design but has somehow reduced the approach angle of the car by a marginal level. The massive change on the Duster’s nose is at its new bigger grille featuring some chrome teeth and a big Renault logo. The headlamps now get projector lenses and L-shaped Daytime running lamps. The side profile of the Renault Duster does not witness any major changes as compared to the previous models. The biggest revision here is a new attractive machine-cut alloy wheels along with a small strip of chrome running on the base of the window line (for the top-spec RXZ trim). We still notice the bulk wheel arches and roof rails that make the typical character of the Duster. It could have been better if the cheap, flap-type door handles are replaced by the more modern units that we see in the current competition. Like at the side profile, Renault seems a bit lazy to make bigger tweaks to the rear fascia of the Duster SUV. Nothing much has been changed at the rear end of the car, barring some added plastic claddings on the tailgate to flank the tail lamps. The waterfall LED tail lamps remains unchanged.

Renault Duster carries quite decent proportions that make it marginally longer, higher and wider than the Hyundai Creta. The exact dimensions of the Renault Duster are given in the table below:

Renault Duster measures 4,360 mm in length, 1,822 mm in width and 1,695 mm in height with its wheelbase of 2,673 mm. The SUV also gets a high ground clearance of 205 mm which comes in handy for the driver in the bad roads or some off-road-oriented driving conditions. Decent sizes translate into decent space on the inside as well. The Renault Duster offers a boot space of up to 475 litres which is significantly larger than the popular Hyundai Creta.

It turns out that Renault India has put more effort to update the interior of the Duster SUV, all the ways to jazz up things and address the boredom that gripped the earlier version. The dashboard layout has been put more character into it. The centre console has been freshened up and now boasts of rectangular vents instead of the circular units. The body-coloured treatment on the dash looks pretty cool and add some colours to the car’s interior. The new steering wheel is now soft-touch, nicer to hold and looks ways better than the older unit. There’s an additional glovebox atop of the dash taking up the place of the outgoing storage recess and right below it lies a new “Duster” lettering. However, the Renault Duster interior falls short of our expectations when compared to the young and versatile SUVs in the market. It feels a bit “plastic-ky” on the inside while the fit and finish aren’t on par with that of the latest offerings. The instrument cluster features analogue units that are less fancy than the all-digital instrument panel of the new Renault Triber. Touchscreen infotainment system is still an ordinary unit that is far from what the new-age connected cars like Kia Seltos, Hyundai Venue and MG Hector has now on offer.

Still, when looking on the bright side, the ordinary touchscreen of the Duster is friendlier to our pocket of course. It features a 7-inch touchscreen MediaNav Evolution unit sourced from the Renault Kwid hatchback. Renault Duster also gains a range of comfort-focused features for a better experience of driving on the go such as more supportive seats, 4-speakers sound system, steering mounted audio and phone controls, rear seat armrest with cup holders among others.

Renault Duster is spacious enough to seat five passengers comfortably in the 2+3 configuration. Other than that, the Duster is also available in the seven-seat version to offer enough space for seven occupants. The second row of seat is very generous to seat three adults with comfort.

Renault Duster packs itself with most of essential safety features such as driver and passenger airbags, anti-lock braking system (ABS), Electronic Brakeforce Distribution (EBD), brake assist, engine immobilizer, rapid deceleration warning, reverse parking sensors, speed-sensitive door locking, impact sensing door locking among others, all standard across the trims. To compare the Duster with its competitor, the Renault car does not lose out the game when considering the long list of safety and security kits.

Renault Duster can be had with two engine options under the hood, including a 1.5-litre petrol and a 1.5-litre diesel unit. That said, the company hasn’t made any mechanical tweaks to the Duster and the SUV is yet to enter the BSVI era. Do note that the BSVI-compliant Duster is set to see its market launch in 2020. 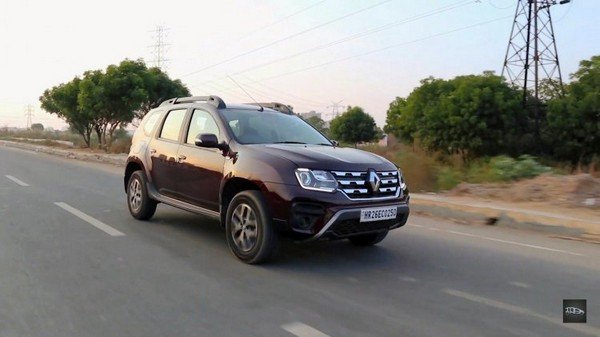 Particularly, there’s an optional AWD system for the Duster diesel 110 PS model. With a total of 4 gearbox options onboard, the Renault Duster comes off as an interesting SUV The petrol engine of the car is quite potent and the 6-speed CVT here is said to be one of the best units out there in the segment. However, one grievance for the CVT option is in its fuel efficiency which we’ll find out right away.

Renault Duster Cost: Is It Affordable?

Currently, the Duster is priced from Rs 7.99 Lakh for the base models to Rs 12.49 Lakh for the top-of-the-line variant (ex-showroom, Delhi).

In this price range, the Duster is quite an affordable compact SUV in the pool that makes it one of the worthy cars under 8 Lakhs in India – quite value-for-money for the 4.3-metre-long SUV. Further, the Duster has a reasonably high brand value as well and due to its years of presence, we can easily find good-condition second-hand Renault Duster for sale in India.

Renault Duster Colours: How many options?

Verdict: Is Renault Duster Worth Buying?

The Duster is a competent mid-size SUV that stays really competitive in terms of pricing in the market. Reaping the huge advantage of price, the Renault car has a butch-looking silhouette and scores very well in terms of features.  Although the design of the Duster might be abit long in the tooth and it lacks some modern touches, sophistication and finesses that the newer SUVs are excelling in, it is the only SUV in the lot to offer a diesel AWD variant. The Duster obviously becomes a decent option for those looking for a capable automatic SUV within budget.

Overall, IndianAuto hopes our Renault Duster Review could give you an idea of what is for and against the Duster in the competition. Stay tuned to rear more informative review articles of other cars from across the country.

Our Hyundai Creta vs Renault Duster Comparison comparison review will give you a full analysis of each car's pros and cons.

Here comes another fierce race in the SUV segment: Hyundai Creta and Renault Captur? Will the new Captur capable of stealing the shine of the well-known Creta?

Hyundai Creta vs Renault Duster: A fierce rivalry in the SUVs segment

Both Hyundai Creta and Renault Duster are established SUVs in the Indian market. This comparison review will give you a full analysis of each car's pros and cons.

The upcoming 7-seater Renault Duster has been spied while getting tested in Romania. It will be offered in 6- and 7-seat configurations.

The Renault Duster is one of the elder statesmen in the compact SUV segment. The French automaker is currently offering discounts of up to Rs 90,000 on the SUV, making it an attractive deal.

Dacia has recently revealed the concept version of its upcoming Bigster SUV. It will be offered in 5-seater and 7-seater configurations and will sit above the Duster in the brand's line-up.