Our Hyundai Creta vs Renault Duster Comparison comparison review will give you a full analysis of each car's pros and cons.

Hyundai Creta is one of the most successful SUV in the Indian market at the moment. It is on the top best-selling cars with a fully-loaded features list as well as an incredible performance. It is no wonder why it becomes a strong competitor in its segment. Renault Duster has made a great move of lowering its price, which constantly boosts their competitiveness. This makes it more appealing to customers and gains an advantage over its other rivals which includes Hyundai Creta. In the near future, we also expect the launch of the new Duster in the Indian market. With the price appeal and the new updates, will Renault Duster beat Hyundai Creta in the race of the SUV segment? Let's find out in our Hyundai Creta vs Renault Duster comparison here.

2. Hyundai Creta vs Renault Duster Dimensions - Which SUV is bigger?

Overall, the Duster has larger dimensions, with the length of 4315, the width of 1822mm and the height of 1695mm. Will this mean a better interior room? Let’s find the answer later in this comparison review.

Now, let’s look at the appearance of these two SUVs. The most distinguishing thing about the Creta’s look is its dual-tone exterior paint. With blackened pillars and floating roof effect, it seems that Hyundai has targeted on creating a sporty look for the Creta. And in fact, the look of Creta has successfully embedded the impression of a sporty and grand-looking car. The recent updates have also given the Creta a new life with many exterior twists which don’t change the design language but enhance it in a good way. The Duster’s design, honestly, looks quite dated. It is understandable because it hasn’t received any updates since 2016. And the new version hasn’t arrived in the Indian market yet. So, let’s hope for the better new look in the future. But before the updated version launched, we will examine the exterior of the out-going Duster. The Duster features a rough front look. The roughness is expressed through its integrated grille-headlight units and a pronounced bumper. It's front profile has a playful grille with chrome insert and Renault badge in the middle. The headlight unit, roof rail, and roof-mounted spoiler enhance the overall masculine look of the car. Even though being around for a quite long time, the Duster doesn’t fall behind with features like projector headlamps and daytime-running LEDs. However, in this part of our Hyundai Creta vs Renault Duster comparison, it's the former that takes the cake.

Entering the cabin of the two cars, you can easily spot out the differences. Renault Duster appears to be sporty and masculine, whereas, the Creta looks more simple and practicality-oriented. For example, the Duster features a dual-tone interior theme, not to mention the coloured accent on the car door. The dashboard has a straight-forward layout which might feel a little bit boring when comparing to the current design trend. The multifunction three-spoke steering also looks quite outdated. Its 2016 touchscreen infotainment system could not compete with the recent models in terms of look; nevertheless, it still serves well with many functions like MP3, AM, FM, USB and AUX input, Bluetooth connectivity. It seems that the Creta has a better interior built than the Duster. The cabin of the Hyundai Creta features a large space, a high-quality material and a better fit and finishes. One more plus point for the Creta is its leather-wrapped seat.

As we know from the early part, we can see that the Duster has a greater dimension. However, it doesn’t necessarily follow as it will have a more spacious interior room. In fact, Hyundai Creta is the one to give a better and more comfortable cabin. The Creta features roomier legroom. One minus point for the Creta is that its bolstered rear seats make it hard to have the third passenger to occupy the second bench. Whereas, the rear seat of the Duster provides a supportive and more enjoyable drive for the rear occupants. In terms of the boot space, the Duster has the boot space of 475 litres whereas the Creta’s cargo space is 400-litre. The gap of 75 litres makes a significant difference.

4. Hyundai Creta vs Renault Duster Features: Which is safer and more convenient?

The Creta and Duster shares some common features, for example, power steering, power window, auto climate control, a reverse camera as well as control-mounted steering. However, the Creta doesn’t receive cruise control and CD player whereas the Duster miss rear AC vent, built-in navigation systems, engine start-stop button. Besides, the Creta hosts an updated and well-functioning infotainment system with Android Auto, Apple CarPlay, and Mirror Link support, which the old-fashioned Duster doesn’t have. The touchscreen of the Creta is also more responsive than the Duster’s screen. The 1.6 diesel engine of the Creta is the strongest motor out of these engine options and takes the shortest time to accelerate from 0-100kmp. With the assistance of a six-speed gearbox and light clutch, the Creta offers a convenient drive.  On the other hands, the Duster equipped with an all-wheel-drive system, Duster is the better off-roader than the Creta. Renault Duster’s 4WD has been always considered as one of the best performing SUVs in India. It is no surprise that the Duster easily beats the Creta with a better riding quality and handling. The Duster has less body roll, and even at a high-speed drive and its steering also feels more responsive.

With regard to the off-road ability, it is the Duster that wins this game. Due to its powerful four-wheel-drive system, the Duster could venture to the farther from the city driving. Whereas the Creta feels less confidence at high revs, making it more a city wheeler than a capable off-roading SUV. From this, it's clear that the South Korean small SUV is the winner of this part of our Hyundai Creta vs Renault Duster comparison. 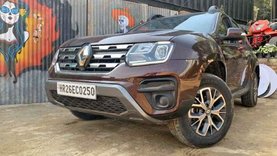