Skoda announced the commencement of booking for the BSVI-compliant Rapid 1.0L TSI against a sum of Rs. 50,000.

Skoda showcased a slew of products at the recently concluded 2020 Auto Expo including the Vision-IN sub-compact SUV, Karoq, and more. However, the most affordable offering from the carmaker – Rapid, was showcased with a new heart at the auto show. The carmaker showcased a BS-6 compliant version of the Rapid, which featured a 1.0L TSI engine. The Rapid is all set to be launched with this new engine next month in April, although, the bookings for the car can now be made at any Skoda dealership against a sum of Rs. 50,000. 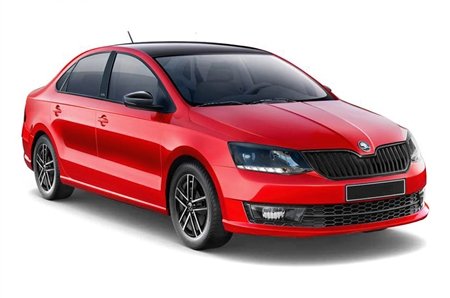 Skoda has started accepting booking for the BS-6 Rapid against a sum of Rs. 50,000.

With the new BS-6 emission norms kicking in, Skoda has announced that it would stop selling diesel cars in the country. For the same reason, the carmaker has opted for a 1.0L 3-cylinder turbocharged petrol motor. This is same the 1.0L TSI engine that has been introduced on the BS-6 Polo and Vento, recently. Also, the power output is expected to remain identical as on the Volkswagen twins. In the Polo and Vento, this engine belts out a peak power output of 110 HP and a max. torque of 175 Nm. It is offered with a 6-speed manual gearbox and a 6-speed torque convertor based AT in the Volkswagen cars, and we expect the same set of gearbox options to be offered on the Rapid 1.0 TSI as well.

“The state-of-the-art 1.0 TSI petrol engine, to be introduced with the Škoda Rapid, is central to our BS6 powertrain and fuel strategy – offering an exceptional power output as well as excellent fuel economy.”

The other changes on the BS-6 Rapid include a new touchscreen display for the infotainment unit. Cosmetically, the BS-6 Rapid will look identical to the outgoing car, however, a new design for the alloy wheels is on the cards. Skoda Rapid with the new 1.0L TSI motor and alloy wheels was showcased at the 2020 Auto Expo.

Currently, the Rapid is sold at a starting price tag of Rs. 8.81 lakh. With the new 1.0L TSI motor, expect the price tag to be increased by Rs. 50,000 at least. Once launched, Rapid 1.0L TSI will take on a direct competition with the Maruti Ciaz, Volkswagen Vento, Next-gen Honda City, and Hyundai Verna facelift, which would go on sale by the next week.