The Hummer is back from the dead after a decade and in a new EV supertruck avatar. Met with overwhelming response, The Edition 1 launch edition has already been sold out. Further details below.

The GMC Hummer EV is set to become the quickest pickup ever when it hits the showrooms late next year, but it's already off to a quick start in terms of sales. GMC boss Duncan Aldred this week said that reservations for the entire first-year model run were filled in under 10 minutes after they became available in October, each requiring a $100 deposit. "It's fair to say that the first edition is highly sought after ... because of a combination of it being the top of the line in terms of features and capability, but also being the first available vehicle — and what we've seen is clearly the customers want the vehicle just as soon as possible," Aldred said at a media roundtable, The Detroit News reported.

Despite having a starting price of $112,595 Aldred had previously stated that Edition 1 launch trucks had already been spoken for in under an hour. However, he did not mention how many of the limited-edition trucks will be built. GM is still taking reservations for the lower-priced future modes, which start with the $99,990 EV3X in fall 2022 and will be followed by the $89,990 EV2X in spring 2023 and the $79,990 EV2 in spring 2024.

Aldred’s comments come as the first images of the HUMMER EV being tested at GM’s Milford Proving Grounds have been released ahead of the pickups heading to northern Michigan to be put through the automaker’s winter testing regime.

The old Hummers with their highly uneconomical petrol engines were discontinued after GM filed for bankruptcy following the 2009 global economic crisis. Starting from a fresh slate, the Hummer EV will be using GM’s new ‘Ultium’ batteries and three e-motors that pump out over a 1000 PS and an Earth reversing 1500 Nm of torque while having a range of around 565 kms before needing a recharge. 0-100 kmph is “approximately three-second”, while 350kW DC charging can give you 160 kms of range in just ten minutes. 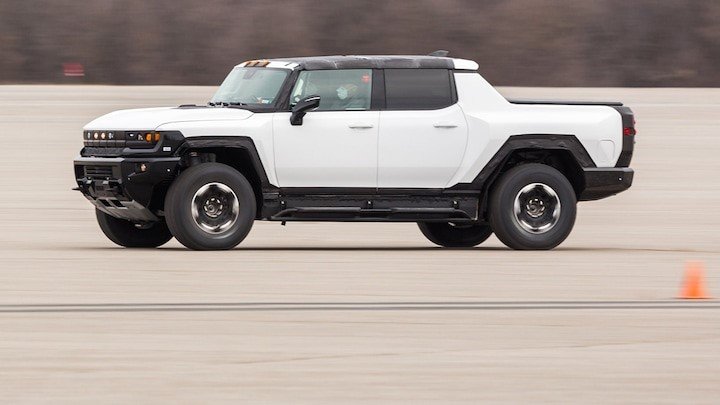 GM is billing the Hummer EV as the “ultimate off-road EV supertruck”, it comes with 35-inch tyres and is compatible with 37s, adaptive air suspension with “Extract Mode” which can lift the body by six inches and thick steel plating underneath to keep the battery from getting damaged. Cameras all around the body give up to 18 different views of the ground around and under the pickup, which GM claims can scale an “18-inch vertical wall”, wade through 2ft of water, and quite literally side-step tricky obstacles with a “CrabWalk” feature that points the front and rear wheels in the same direction. Over to the inside, you get a 13.4-inch centre screen and another 12.3-inch display just for the driver. Removable roof panels can be stowed in the Tesla-style “frunk”.