The 2020 Mahindra Thar, which is the second generation of the popular SUV, has been spotted with minimal concealment ahead of its imminent launch

Unlike what was being speculated, the all-new Mahindra Thar didn’t make it to the Auto Expo 2020. That, however, doesn’t mean there has been any sort of delay on the manufacturer’s end. The second generation of the lifestyle SUV is very much close to making it to the market and this, here, is the best look we’ve ever had at the production-ready model. The all-new Mahindra Thar seems to be very close to its official introduction and the dealerships could start receiving the first batch of the SUV in the weeks to come. True, the entire automotive retail machinery came to a standstill last month but things are slowly but surely getting back on track and we’re really excited to know that the 2020 Thar could be one of the first all-new models to launch in the post-lockout era. The 2020 Mahindra Thar is an all-new vehicle, inside out. However, it retains the classic look of its predecessor, which is something that’s surely going to work in favour of this vehicle. So, what you do get is a thoroughly modern look without compromising on any of the classic CJ-like aesthetic appeals that the earlier version offered.

Various spy images have already revealed that the 2020 Mahindra Thar is going to be available in both hard- and soft-top variants. The one that has been spied recently is the latter but there’s also a hard-top version on its way. Also, the new SUV will be sold with a diesel as well as a petrol engine option. The former will be a new-age 2.0-litre oil-burner that should be good for 140 bhp, while the latter will be a 1.5-litre turbo-petrol unit with more than 160 horses on the tap.

Both the engines will come mated to a 6-speed manual transmission as standard. A 6-speed auto ‘box is also likely to be available on both the powertrains. However, the unleaded-sipping variant will be initially meant exclusively for export markets. Both the engine variants, though, will be sold with a four-wheel-drive system and lockable differentials. 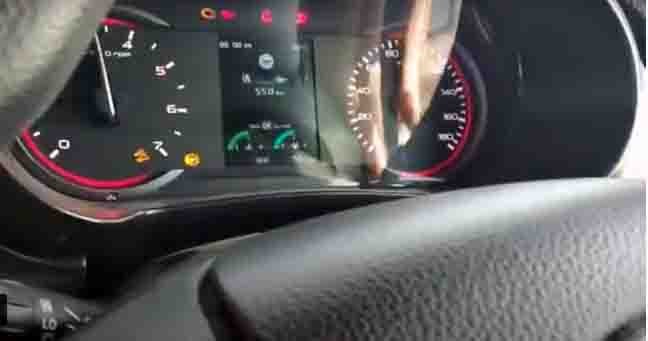 Earlier, we had a clear look at the instrument cluster of the new model - the colour-MID and the more upmarket dials can be easily seen in the image above

The next-gen Mahindra Thar will be underpinned by the ZEN3 platform, which means the overall dynamics will be fairly better than what the earlier version offered. Also, the cabin of the new model will be far more sophisticated and will be available with optional front-facing rear bench seat. The features kit will include a touchscreen infotainment unit with Apple CarPlay and Android Auto support, multi-function steering-wheel, cruise control, electric windows and so on.