While many know what the luxurious new Kia Carnival has to offer in terms features and space, but not how it can perform. That is exactly what we aim to find out in this acceleration test.

Rewind back a few months and if you were in the market for a vehicle that classifies as a premium MUV, yet is a step up from the quintessential Toyota Innova Crysta - well, you were in a bit of a conundrum. Before Kia came along and launched its all-new Carnival, you either chose the Innova Crysta or had to spend north of INR 50 lakh to get the same kind of comfort and versatility. When we finally got to get our hands on the new people carrier, we came away impressed with the entire package.

Recently, we decided to test three different parameters of the Kia Carnival, with three attempts for each: 0-60kmph, 0-100km/h and 0-140 km/h. However, these tests were conducted with the AC on full blast and all other electronic systems turned on, in order to imitate real world conditions to the best of our abilities. We conducting these tests on a closed, private road and highly advise against anyone reading from carrying out such tests on public roads. The Carnival gets a 2.2-litre, 16-valve, CRDi turbo-diesel which develops 200PS and 440Nm of torque. The only transmission available on offer is an 8-speed automatic transmission. We got going with our three attempts at 0-60km/h, before moving on to 0-100km/h and 0-140km/h respectively. In our first try, the clock stopped at 4.86 seconds, followed by 4.93 seconds and 5.05 seconds. After this, we lined up for our first shot at 100km/h and were getting familiar with the point where we needed to launch for the best times. This time, we managed 10.32 seconds, followed by 9.93 seconds and 10.18 seconds respectively. By this time, we were already elated by the fact we managed a sub-10 second time to reach 100km/h. Not bad at all for a vehicle that runs more electrics that an entire house in an Indian village, while can even be configured to carry 9 passengers if need be. In terms of performance, thanks to the large amounts of torque on offer and a slick 8-speed gearbox, the Carnival can hardly be called slow. Step on the throttle and the Carnival leaps to actions, climbing through the revs and gears effortlessly. However, while the power does climb linearly and quickly, it does taper off near the 3,800rpm - 4,000rpm mark before it needs to shift up again. 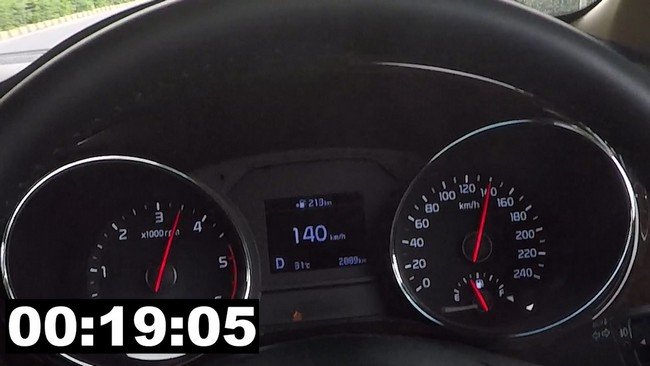 However, before you even realise, you are already doing three-digit speeds that many would call excessive. Now we move on to the first try of our final test parameter. In our final time test, we managed to clock 19.05 seconds, followed by 19.8 seconds and 20.0 seconds flat