The concept of flying mobility in India seems quite impossible at the moment, though their manufacturing will take place in Gujarat from next year.

Netherlands-based PAL-V is a one-of-a-kind manufacturer that has built the world's first production-ready flying car. The carmaker first showcased the 'compact hybrid land+air vehicle' at 2018 Geneva Motor show in its concept form. PAL-V, which stands for 'Personal Air and Land Vehicle', has, over the past few years, gone through a few concepts and working prototypes of the flying car to get the car ready to its production form.

Also Read: Uber Flying Car To Be Available In India In The Near Future

The concept of flying mobility in India seems quite impossible at the moment, though the carmaker has confirmed that they are even planning to set up a manufacturing facility in Gujarat by next year. The Vice President of PAL-V International Business Development department, Carlo Maasbommel has signed an MoU (Memorandum of Understanding) with Gujarat's Industries Principal Secretary, MK Das and Vijay Rupani (the Chief Minister of Gujrat).

Flying cars would make for a unique way of transportation, and there are few problems in setting up the production facility in India. PAL-V has said that the Indian government is helping them to get all the significant documents ready along with acquring all approvals from the central government. Mr Carlo said that they've made the right decision by choosing Gujarat to set up a manufacturing plant, describing it has “a world-class infrastructure, ease of doing business and excellent logistic facilities”. The company is also planning to export flying cars to countries like the US and Europe. PAL-V has already received around 100 orders for its upcoming product. The PAL-V Liberty is a combination of helicopter and a three-wheeler. 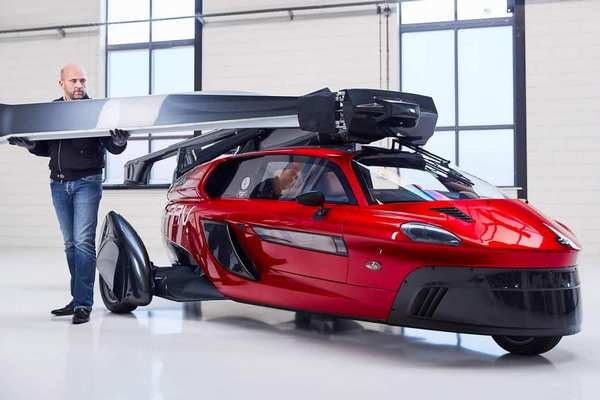 Most of its body is made from carbon-fibre and its internal components are made from aluminium and titanium for structural rigidity combined with lightness. All this may sound quite expensive to manufacture, but it has managed to reduce the weight of the car by a huge margin over prototypes made of other materials. The flying car weighs around 680 kg. To get going, the futuristic vehicle only needs 165 meters to take off and 30 meters to land down safely. It derives it power from two 100bhp motors, which help the vehicle attain a top speed of 180 kmph on-road or in-air.