A new teaser of the upcoming Renault Triber is out, giving us hints of the exterior of the Kwid-based MPV

Renault Triber will make its global debut on June 19th. Renault will launch the new seven-seater in the Indian market first. Launch in other countries will follow. Ahead of its world premiere, Renault Triber’s look is currently hinted through the new teaser.

The teaser reveals the silhouette and partially shows the front face of the new Renault Triber. Under the dim backlight, we could tell that the Triber is the mixture of SUV and MPV. In other words, it will be a super spacious SUV but with shorter overhang and less macho design. At the fascia, we will see the familiar grille of Renault with the diamond-shaped logo in the centre. The bonnet is sculptured with sharp shoulder character lines. Besides, Renault Triber is going to get a dual headlight setting with projectors. On the lower bumper, the foglight housing is likely to be integrated with LED DRLs which comes as a thin strip of lights. Other than that, Renault Triber will get roof rails that give strong feels of off-road capable car. 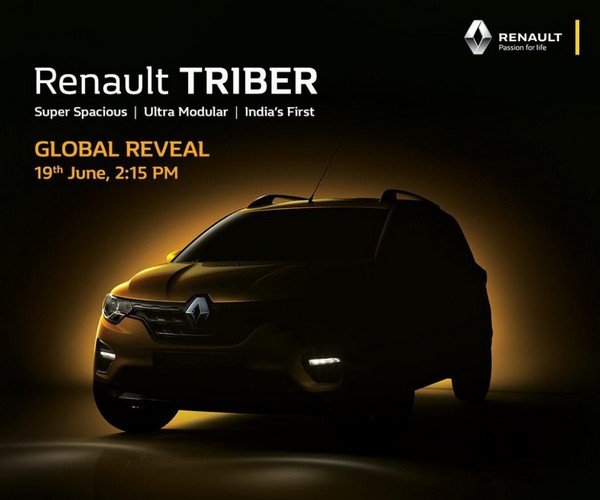 Renault Triber’s latest teaser is out, giving some essential traits of the new SUV

Renault Triber 2019, as the extended version of the popular Renault Kwid hatchback, will come as the most affordable seven-seater in India. Applying the same approach of the Datsun Go Plus, however, Renault emphasizes that their new extended seven-seater model could provide a better spacious interior. On top of that, it will be the first seven-seater to get the removable third-row setup, which means there will be more space for storage.

Even though no detail about the engine is  revealed on the new teaser, the Renault Triber is expected to come with a 1.2-litre petrol engine. Possibly, the transmission options will include a standard 5-speed manual gearbox and an optional 5-speed AMT unit. Especially, in line with the approaching safety norm, the all-new Renault Triber will certainly get dual front airbags, ABS with EBD, rear parking sensor, speed alert and driver seatbelt reminder across the range.

When launched, it will be priced at the same range with sub-compact SUV Tata Nexon, Maruti Brezza and Hyundai Venue.