Here’s a new rendering of the Suzuki Jimny Sierra imagined as a new-age Maruti Gypsy King. The Suzuki Jimny was showcased in India at the 2020 Auto Expo.

Many off-road enthusiasts around the country are waiting for Suzuki to introduce the new-gen Gypsy in the Indian market. The all-new Maruti off-roader will be based on the Suzuki Jimny Sierra that was showcased at the 2020 Auto Expo early this year, and reports suggest that the automaker has plans to launch the Gypsy in our market in the coming months. The new-gen Maruti Gypsy will be quite different from the Suzuki Jimny Sierra available in the international markets. Today, however, we are not discussing its differences with the global model. Instead, we’ll be comparing the expeted commonalities between the new model and the original Gypsy. Here’s a new rendering, which shows the Suzuki Jimny rendered as the new-age Maruti Gypsy King.

Here's a Look at All Predecessors of Suzuki Jimny

This digital rendering has been created by Shoeb R. Kalania’s YouTube channel, SRK Designs. The video begins by showcasing the ongoing three-door Jimny SIerra. Shoeb then proceeds to sketch some added details. The SUV is extended by a significant margin. The overhang at the back, which was negligent in the original model is stretched-out.

The roof then follows suit, with a moderate slant growing toward the back. Moreover, the quarter glass in also extended to match with the rest of the profile of the car and it features a sliding mechanism to allow the window to open. The wheelbase of the SUV is slightly longer, and you also get a tail-mounted spare wheel, just like the original model. Furthermore, the colour shade has been changed from bright green to faded green. We are very much impressed with this digital version of the Suzuki Jimny and want Maruti to seriously consider this one. 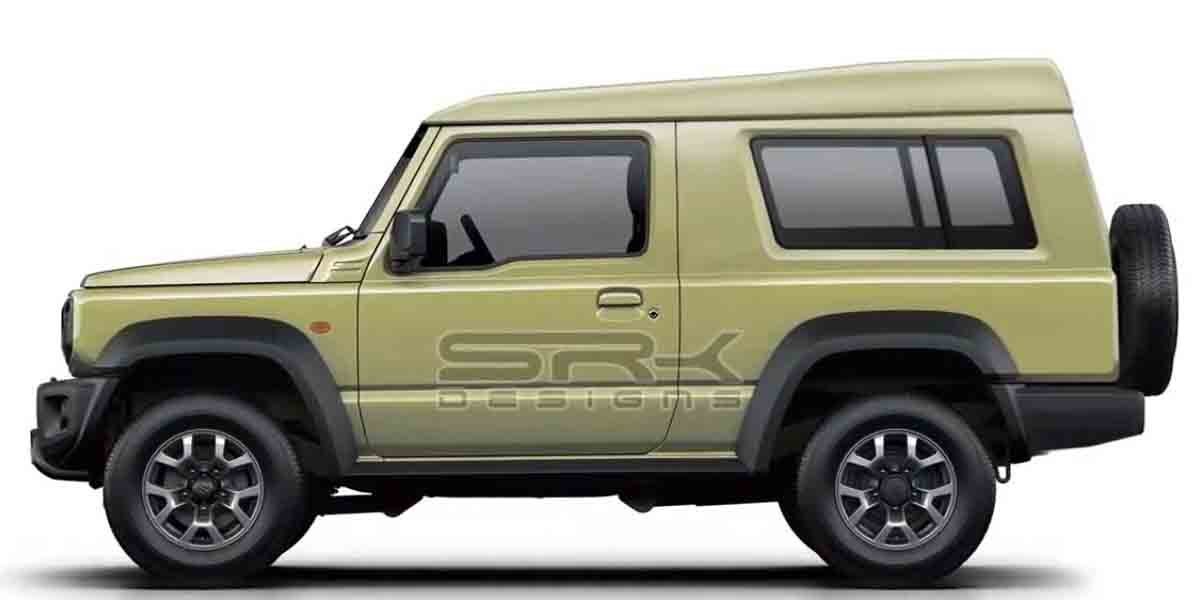 Mechanically, Suzuki Jimny Sierra is powered by a 1.5-litre K15B four-pot petrol motor, which churns out 103bhp of power and 138 Nm of twisting force. Transmission duties are done by a 5-speed MT or an optional 4-speed torque converter automatic gearbox. The same powertrain option does duties in the Maruti Ciaz, Brezza, Ertiga and XL6. Reports suggest that the automaker has plans to introduce Jimny in 5-door version, exclusively for the Indian market.