The powertrain of this modified Skoda Rapid has been tuned to help the car reach a top speed of 223 kmph, thereby making it much faster than the stock version

Indian roads are in bad conditions, which require the cars to have a decent fuel mileage instead of impressive power. However, some drivers give their cars’ performance the top priority and decide to adjust the vehicles which are already on sale in the Indian auto market to give it a more powerful performance. The video shows a modified Skoda Rapid which has been adjusted as regards the powertrain; thereby becoming the Rapid with the highest speed in India.

A novice look may deceive you into thinking that this Rapid is no different from a normal one is still a “Sleeper”. Nevertheless, once the throttle is pressed, you will be taken aback with its speed. A wide array of alterations have been done to the Rapid’s 1.5L turbo diesel motor. Before going to the details, let’s have a look at the video which shows the Rapid accelerate to its maximum speed.

Among the changes done to the vehicle, the most outstanding one is the Stage 1 ECU remap which helps the power and torque figures increase by up to 30 PS and 50 Nm, respectively. In total, the maximum power/torque output delivered by the engine amounts to 140 PS/300 Nm. The transmission duties are undertaken by a 7-speed DCT direct-shift gearbox, which spreads the power to the front wheels of the vehicle. Besides, some extra alterations are also done to the car to ensure that the additional power is fully supported.

The fuel needs to be burned, which means that a sufficient amount of air needs to be provided for the motor. As a result, the modifier has decided to equip the car with a new BMC performance air filter. Altogether, the maximum speed of the car amounts to 223 kmph, according to the speedometer. To guarantee safety, the maximum speed of the Rapid is electronically restricted, which is required on all high-end performance cars. The top speed may vary, depending on the capabilities of the car to deal with each situation. The video above shows the Rapid travel at a speed of approximately 200 kmph before gradually accelerating to reach 233 kmph. 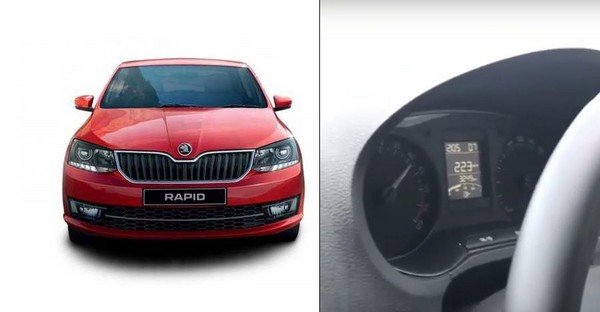 The modified Skoda Rapid can reach a speed of 223 kmph.

As regards the price, the ECU remapping is priced at approximately INR 35,000 whereas the BMC  filter is priced at about INR 7,000. In addition to these changes, the customized Skoda Rapid now runs on aftermarket Momo Massimo black alloy rims with 200/50 low-profile Michelin Pilot Sport tyres. Small as they may seem, these new tyres contribute to the car’s capabilities and also alter how it manages on the road including accelerating and braking. The aftermarket rims and the tyres cost INR 70,000. Moreover, all of the chrome elements on the car have been removed to give it a sportier appearance.

This is a product of Harmonixx Tuning in Bangalore. You can contact them via Harmonixx Tunnine social media page.