Ford Freestyle Vs Tata Altroz: Which One Is The Better Choice?

Launched in January 2020, the Tata Altroz can impact the sales number of the Ford Freestyle since they have similar and different features which can persuade Ford Freestyle potential buyers to look at the new Tata SUV and give both of the two cars a second thought. Read this detailed Ford Freestyle vs Tata Altroz comparison to find out which hatchback is the better choice for you.

Despite being the cross-hatch version of the Figo, the Ford Freestyle has its own identity with some unique features such as a raised height, bespoke electric power steering tuning and wider tracks; it is more than just an improved version of the Figo. Having been already on sale in the Indian auto market since for almost two years, the Freestyle has created a certain prestige in the country.

Being a newcomer to the teeming Indian hatchback segment, the Tata Altroz promises to be a formidable competitor against other vehicles such as the Maruti Baleno, Honda Jazz, Hyundai i20 and of course the Ford Freestyle. This new hatchback is the first Tata model to be underpinned by the Tata’s new ALFA platform and also the very first Tata car to be powered by BSVI motors.

Ford Freestyle vs Tata Altroz Dimensions: Which is bigger?

The Tata Altroz is bigger than the Ford Freestyle in length, width and wheelbase; however, the former is dwarfed by the latter in the height, ground clearance and kerb weight. Both of the cars can accommodate up to five people. 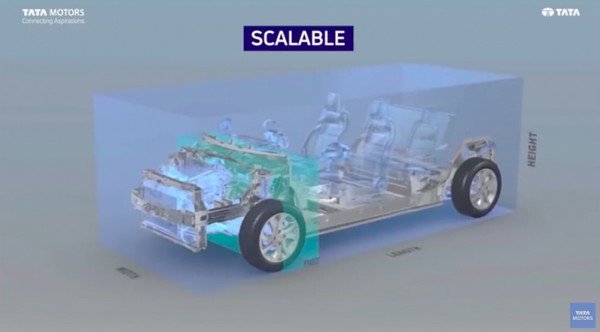 The ALFA platform helps the Tata Altroz have a light weight.

Ford Freestyle vs Tata Altroz: Which has the more attractive appearance?

The Ford Freestyle looks quite similar to its Figo sibling but different in some small details. The first one is that the front and rear bumper are finished in black with C-shape surrounds which accommodates two fog lights. The headlamps with the smoked effects also add to the attractiveness of the vehicle. The front grille contributes to the ruggedness of the vehicle with all-black finishes. On the side profile, there are some outstanding features including a kit of attractive four-spoke 15-inch alloy wheels. The generous use of black body cladding which extends from the front bumper through the wheel arches to the rear helps the car look sportier. The redesigned taillights and the skid plate at both of the ends add to the general attraction of the hatchback. The Ford Freestyle has many things in common with the Ford Figo in terms of the exterior design.

The Tata Altroz does not bear giving in to its competitor in terms of the exterior design. The Tata hatchback features swept-back headlamps which are connected with each other by a chrome band, a black sleek grille. High-set fog lights which house the LED DRLs and an elegant air dam on the bumper are some of the other outstanding front features of the Altroz. On the side profile, the large wheel arches come harmonious with the Altroz’s overall design but the 16-inch alloy wheels are not big enough. In the rear, the Tata Altroz has a dual-colour paint scheme. Particularly, the tail lamp’s surround and the upper part of the boot lid get a black colour, which makes them look quite sporty. 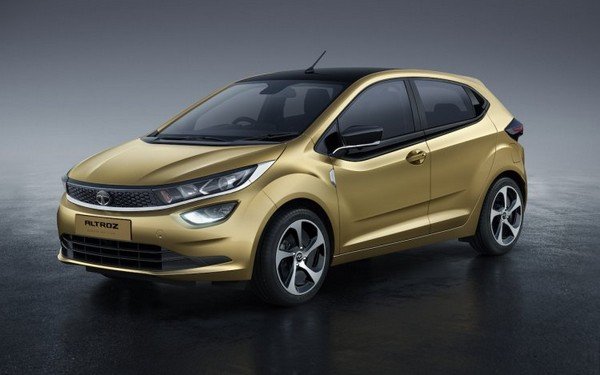 The Tata Altroz also has a handsome exterior design.

Like the exterior design, the cabin of the Ford Freestyle also bears a strong resemblance to the Ford Figo with some distinctions. The unique chocolate-on-black paint scheme gives the Freestyle’s interior a fresh look. The presence of the touchscreen infotainment system also helps enhance the look of the cabin. The centre console has also been redesigned to house the 6.5-inch display. The simple instrument cluster design looks simple while the quality of the door and the dash plastics seems scratchy. The front seats with a long nice base is accommodating. The legroom at the rear seat row is decent and the windows are large and nice. However, the taller rear passengers may find the headroom just sufficient and the fixed headrest a little bit annoying.

In the meanwhile, in the Tata Altroz, the dashboard has an elegant design but not as modern as the exterior. The Altroz’s independent 7-inch touchscreen (wider than that on the Ford Freestyle) is located high. The dash has some layered effects and texture plastics for the top section, a gloss finish for the centre and light grey materials for the lower section, which makes it look more interesting. The instrument is very modern and appears to be a segment-leading unit with the combination of a digital tachometer and an analogue speedometer. The large front seats and a sliding centre armrest are sure to offer the front occupants a comfortable journey. Being the widest car in the segment, the Altroz has sufficient shoulder room to accommodate three occupants in the rear.

Ford Freestyle vs Tata Altroz Features: Which is more convenient and safer?

The Ford Freestyle was launched almost two years ago and seems to be outdated in comparison with the modern hatchbacks. Nevertheless, at the time of its launch, the Sync 3 touchscreen system used to be the best one in the segment and also enhances the Freestyle interior’s quality. The system offers slick touch responses and can be mated to your phone via Bluetooth along with Apple CarPlay and Android Auto very quickly. The Freestyle is also equipped with keyless entry and go and auto temperature control. Particularly, Ford’s MyKey feature allows the owners to pre-set the max volume levels and speed limit. The Freestyle also offers many storage spaces, especially in the front section of the cabin. There are massive door pockets, two cup holders and a rubberized panel to house your phone in the centre console. The Ford Freestyle cabin has begun to show the age.

On the other hand, the Tata Altroz is also equipped with a wide range of top-notch features. The 7.0-inch infotainment system can be connected to the smartphone easily. Other outstanding features of the new Altroz include such as start push button, a reverse camera, auto climate control, automatic rain wipers, ambient lighting system and a Harman sound system which offers decent sound quality. The Tata Altroz is a highly practical hatchback with numerous storage spaces around the cabin like the large 15-litre cooled glovebox, numerous cupholders. There is also a large storage bay under the driver’s armrest, a 1-litre bottle holder and an umbrella holder on each of the front doors. At the back of the car, large door pockets with shelves can store your phones, etc. 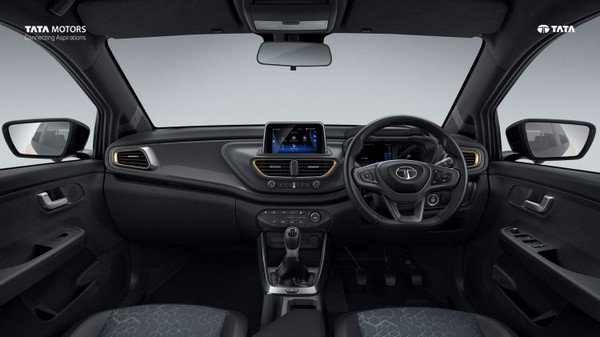 The Tata Altroz has a modern cabin with many advanced features.

The Ford Freestyle offers dual airbags and ABS as standard features across all the variants. The top-spec variants are also equipped with up to six airbags, ESP, traction control, ARP which works in harmony with the ESP to brake individual wheels or decrease the motor power to prevent a potential roll.

On the other hand, the safety features on the Tata Altroz appear to be more diverse with basics like dual airbags, ABS with EBD, reverse parking sensors, central locking, ISOFIX child seat mounts, etc. across all the variants.

Since both of the two hatchbacks are offered in both petrol and diesel motors, we would like to separate this section into two smaller ones each dealing with the comparison on one engine type.

For the petrol version, the Ford Freestyle is more powerful than the Tata Altroz despite the former’s smaller displacement.

The torque of the latter is also higher than the former by 10 Nm. Both of the two petrol versions of the two cars come with an FWD system and a 5-speed MT unit.

As regards the diesel version, the Ford Freestyle motor also delivers a higher figure than that of the Tata Altroz by 10 PS and 15 Nm.

Both of the two cars come with an FWD system and a 5-speed MT.

Generally, in this comparison, the Tata Altroz pales in comparison with its competitor due to its less powerful engines. Both of the two cars are expected to get the automatic version in the foreseeable future. The Ford Freestyle's engine is more powerful than the Tata Altroz.

Ford Freestyle vs Tata Altroz Top Speed: Which is faster?

While the top speed of the Ford Freestyle is 160 kmph and 175 kmph for the petrol and diesel versions, respectively, up to now, there is no information available on the Tata Altroz. We will inform you as soon as the official information has been released.

The time that the Tata Altroz takes to accelerate from a standstill to 100 kmph is much longer than the Ford Freestyle, which might cause some troubles when the driver of the new Tata hatchback wants to speed up.

The Tata Altroz is more fuel-efficient than the Ford Freestyle despite a smaller fuel tank capacity.

Although the Altroz has less powerful motors than the Freestyle, the former’s fuel mileage is higher than that of the latter. Since the a car with a high fuel mileage can save the owner a great amount of money in the long run, car buyers usually pay great attention to the car’s fuel efficiency. Therefore, the Tata Altroz attain a clear benefit over its rival in this aspect.

Ford Freestyle vs Tata Altroz Price: Which is more affordable?

Given the long list of cutting-edge features that the top-spec Tata Altroz offers, no wonder why it is more expensive than its rival. Besides, the Tata Altroz buyers might invest more at the beginning but can save a greater amount of money, thanks to the higher fuel mileage.

Besides the Ford Freestyle, the Tata Altroz also competes against Maruti Swift, the Hyundai Elite i20, the Maruti Baleno and even its sibling, the Tata Nexon in the Indian auto market.

Ford Freestyle vs Tata Altroz Verdict: Which one is worth buying?

Above is a detailed comparison between the Ford Freestyle vs the Tata Altroz. After reading the comparison, have you been able to find your suitable hatchback? Generally, if you prefer a handsome hatchback with powerful petrol and diesel motors, the Ford Freestyle is a more suitable option for you. On the other hand, if you do not mind investing some more money and prefer a hatchback with a modern cabin and a decent fuel efficiency, the Tata Altroz is the ideal one for you.

For more car comparisons in India, please pay a visit to IndianAuto. 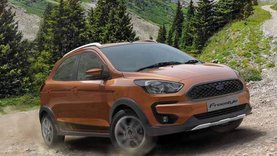