Honda HR-V Vs Maruti S-Cross – Which One Is The Better Choice?

The new Honda HR-V will soon come to the Indian shores to directly compete against the Hyundai Creta as well as the Maruti S-Cross.

After not gaining much success with the R-V series (except for the Honda WR-V) Honda is intending to introduce another SUV to the Indian auto market. A senior executive from Honda Cars India Ltd has confirmed that an all-new SUV which is positioned between the Honda WR-V and the CR-V will soon be launched in India. It is the Honda Vezel SUV, which can also be called the HR-V.

Being already available in multiple international markets, the Honda HR-V will be launched in the Indian auto market by the end of this year and is likely to become a formidable competitor against many other SUVs in India. With this all new-SUV, Honda expects to increase its share in this teeming segment in India. However, till date, there is not much information revealed about the India-bound Honda HR-V model.

One of the rivals of the Honda HR-V is the Maruti S-Cross. The facelift which Maruti Suzuki gave the S-Cross has helped it attain more popularity with the buyers. If you are considering buying one of the two SUVs, this article is going to help you make a wiser decision as to which one to choose by providing a detailed comparison between two vehicles in terms of their design, features and specifications. A comparison between the Honda HR-V and the Maruti S-Cross will help you make a better decision when considering between the two SUVs.

The global-spec Honda HR-V will attract everyone’s attention with a tidy, modest and compact appearance. We can expect the Japanese auto manufacturer alter the appearance of the SUV a little bit when bringing it to India to suit the Indian people’s preference for aggressive-looking SUVs. On the other hand, the Maruti S-Cross resembles a hatchback more than an SUV. In fact, it looks like a crossover. While the Honda HR-V features a neat SUV design, the Maruti S-Cross looks like a crossover.

The Honda HR-V which is on sale in the international market now features a well-designed cabin with a contemporary interior design which has the ability to attract all customers despite the test of time. It also offers excellent visibility and an amber passenger room. The India-bound model is anticipated to resemble mostly the global one. The Honda HR-V seems to defeat the Maruti S-Cross in terms of the interior.

The Maruti S-Cross does not feature an upmarket cabin with the lack of luxury and modern features which should be equipped in a car in this price range. Although there are more soft-touch materials than the previous version, the cabin is still loaded with plastic elements.

In this competition, the Honda HR-V should dominate its competitor because of its more SUV-ish exterior design and a more attractive cabin.

For such a price-conscious market like India, all the automakers pay great attention to the price of each of their models. The Honda HR-V is not an exception. Although the specific feature list is yet to be disclosed, the SUV is expected to experience some alterations against the international-spec one to keep the price down as much as possible. The India-spec Honda HR-V features are likely to include LED headlamps, LED taillights, LED daytime running lamps on the outside and a touchscreen infotainment system, an automatic temperature control, rear air conditioner vents, paddle shifters with the AT motor options on the inside, etc.

The Maruti S-Cross is also packed with a list of top-notch features, which consist of LED projector headlamps which take the inspiration from jewels, gear front headlamps with LED DRLs, alloy wheels in terms of the exterior, and an infotainment setup with steering mounted controls, leather driving wheel and gear knob as regards the interior, etc.

Neither the Honda HR-V nor the Maruti S-Cross is sub-4-metre SUVs. Like the Honda Civic, the India-spec HR-V is expected to resemble the international version in terms of the dimensions with the only alteration being the ground clearance. According to the table above, the two SUVs measure almost equally in all dimensions.

In the international market, the Honda HR-V keeps under its hood two petrol motors. The first one is a 1.5-litre motor which can produce 130 bhp of maximum power and 300 Nm of peak torque. The second one is a 1.8-litre engine which is good for 135 bhp against 170 Nm. Nevertheless, the Japanese automaker is likely to introduce only the less powerful engine with the India-spec model to keep the price as competitive as possible. The transmission duties on both of the two versions will be implemented by a 6-speed MT gearbox.

As a method to offer more options to the car buyers, Honda is also intending to introduce a diesel motor on the India-spec model, which, possibly, will be a 1.6-litre diesel unit with a maximum power/torque output of 118 bhp/300 Nm. This engine also serves as the power source for the Honda Civic and the HR-V in the Indian auto market. The diesel motor will offer a much smoother journey than the petrol motor.

On the other hand, the Maruti S-Cross currently keeps under its hood a 1.3-litre diesel motor which can deliver 89 bhp against 200 Nm and is mated to a 5-speed MT gearbox. Moreover, this engine is paired with a mild-hybrid system which can guarantee a high fuel mileage which is 24 kmpl, an amazingly high figure in its segment.

Nevertheless, the Indo-Japanese auto manufacturer will soon put an end to the Maruti S-Cross diesel motor due to its inability to comply with the upcoming BS-VI emission standards. The power will be then provided for the S-Cross by a 1.5-litre K15B petrol motor which has made its debut with the new Ciaz and also powers the new-gen Ertiga. This unit is able to generate a max power of 105 bhp and a peak torque of 138 Nm. The power is sent to the wheels through a 5-speed MT gearbox and a 4-speed AT unit which is only put on trial.

In terms of performance, if all the expectations above become real, the Honda HR-V will far exceed the Maruti S-Cross and deserve to achieve the winning position in this comparison.

Above is a detailed comparison between the upcoming Honda BR-V and the Maruti S-Cross. Overall, since until now, there has been no official revelation about the India-spec Honda BR-V’s design, features and specifications, all of its information only stops at our anticipations, we have no choice but to wait until the official launch of the vehicle or at least some confirmations from the Japanese automaker to come with a more exact comparison. 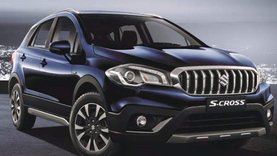