The spec-sheet of the upcoming Ford F-150 got leaked at an unofficial forum of the pick-up truck. The new model will com paired with a smart hybrid system.

The Ford F-series is a range of pick-up trucks which are quite popular in North America. The line-up includes pick-ups like the F-150 (light-duty pickup), F-250 and  F-450 (super duty trucks). The F-150 is the top-selling truck in the company’s F-series lineup. Ford announced at the 2019 Detroit Auto show that it plans to introduce the fully-electric version of the F-150 pickup soon. We are still waiting for the automaker to reveal the launch details of the electric model, but a recently leaked document uploaded on an unofficial forum of F-150 reveals that the 2021 model of the pickup truck will be offered with a hybrid powertrain. The document says that the pickup truck will continue to derive power from the same 3.5-litre V6 twin-turbo EcoBoost petrol unit, but the engine will come coupled to a hybrid system. The document did not reveal the power and torque figures of the engine but the ongoing non-hybrid model of the pickup puts out power and torque outputs of 450 bhp and 691 Nm, respectively.

Also Read: Ford Mustang Mach-E Bookings To Open On May 11 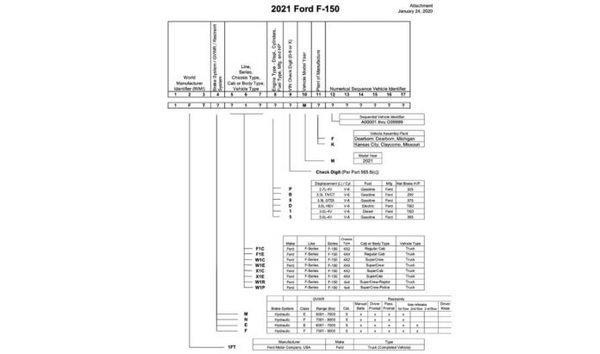 The next version of the Ford F-150 pickup wlll extract power from the same 3.5-litre V6 twin-turbo EcoBoost petrol unit that powers the current model but will benefit from assistance from an electric motor.

Upfront, the upcoming F-150 will employ a redesigned radiator grille along with a new headlamp cluster. One can expect Ford to showcase the updated pickup at the 2020 New York Auto Show, which was earlier scheduled to happen in early April but the event was postponed due to the COVID-19 pandemic. Moreover, to fight against this deadly disease, the carmaker has decided to manufacture ventilators along with other medical equipment. The production of these products will take place at the carmaker’s manufacturing facilities.