The Hyundai Alcazar will be the latest entrant in the sub-Rs 25 lakh 7-seater SUV segment. Though details are scarce, Hyundai has finally confirmed the Alcazar name that's been long speculated.

After months of speculations and hundreds of spy shots, Hyundai India has just officially announced that their upcoming 7-seater premium SUV will be called the Alcazar in the domestic market. The South Korean automaker has previously trademarked the word ‘Alcazar’ in India, and it had been reported previously to be the new 7-seater SUV’s name. The Hyundai Alcazar will mark the entry of the automaker into the three-row mid-size SUV segment, which has recently seen a flurry of activity with the launch of the new Tata Safari and MG Hector Plus. The upcoming Alcazar will be based on the Hyundai Creta's platform and will come with an updated design language. From previously seen spy shots, the Alcazar will come with a unique studded grille design and could feature a redesigned front bumper as well. The headlights will be of a similar vertically-split design as seen on the Creta. The most noticeable redesigns will be on the Alcazar’s side profile and rear facet. Even though the existing platform means it will retain a similar wheelbase to Hyundai’s smaller SUVs, it will be both taller and longer to accommodate the third row of seats.

The Hyundai Alcazar will come with an all-new design post the rear doors, with a larger rear quarter glass area been noticed in the spy shots. The rear end will have a new tailgate design, new LED taillights, and a reprofiled bumper also. The Alcazar is expected to come with a different design for its alloy wheels, and may possibly be a larger 18-inch size, a la the new Tata Safari. From the interior shots that have been spied for the Alcazar, it most probably will carry a similar dashboard with identical features from the smaller Hyundai SUVs. Like its rivals in the segment, the Alcazar will be available with both 6-seater and 7-seater configurations. Powertrain wise, the Hyundai Alcazar will most probably come with the same engine options that do duty on the Creta. There will be 3 engines on offer – 2 petrol and 1 diesel. You get a 1.5-litre petrol making which makes 115 PS/144 Nm of max figures while the diesel is a 1.5-litre four-pot which puts out max figures of 115 PS/250 Nm. The 1.4-litre turbo petrol churns out 140 PS and 242 Nm of peak power and torque, respectively. These engines may get a hike in power and torque to compensate for the extra weight of the Alcazar. All engines can be mated to a manual or an automatic transmission. 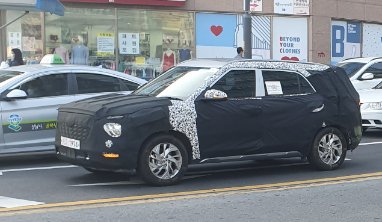 It has been reported that the Alcazar could come with certain ADAS technologies, known as Hyundai SmartSense overseas. While details on this are scarce at the moment, it could feature things like forward collision assist, automatic emergency braking tech, highway driving assist and lane departure warning. Upon launch, the Hyundai Alcazar will likely be positioned below the Tucson. It will likely be priced between Rs 12 – Rs 20 lakh, ex-showroom. The newest entrant in the sub Rs 25 lakh 7-seater SUV segment will rival the likes of the all-new Tata Safari, MG Hector Plus, and the upcoming next-generation Mahindra XUV500.