The upcoming Hyundai Staria will replace the outgoing Starex MPV. The new model will come with an all-new design language which looks sleek and futuristic compared to the older model's tour bus design.

The Hyundai Starex MPV has a consistent seller for the automaker since it was launched 14 years ago. The Starex is not available in India, but we do get the Kia Carnival which is a close sibling to the Hyundai. But the venerable MPV is getting an all-design inside and outside. Hyundai is currently undergoing a change of brand image, as the automaker wants to be known for its bold designs and premium quality instead of being a cheaper alternative with long warranties to European brands and models. The new Hyundai Tucson, i20, and the i30 N are some of the first vehicles of this new brand identity. To make sure its MPV sheds its previous identity, it even gets a new name. The Starex nameplate has been binned, and the MPV is now known as the Hyundai Staria which references the vehicle’s “future-oriented product values and streamlined design characteristics.” Though it may sound a bit like marketing language, the teaser images that have been released gives a peek into the all-new design which looks nothing like the outgoing model. The Starex’s practical and spacious tour bus style gives way to a new sleek and futuristic body.

The front-end of the Hyundai Staria is dominated by the new large rectangular grille that runs the entire width of the MPV with the low-mounted headlights incorporated while the upper half of the front gets a full-width slim LED DRL strip. The side profile gets simple flared wheel arches along with a clean profile that has toned back on the character lines and surfaces. The beltline drops down after the A-pillar to give way for massive windows, letting in lots of light to enter the MPV’s spacious cabin. The rear-end continues the clean and futuristic design with narrow vertical LED taillights.

The interior of the Hyundai Staria borrows design cues from the new Tucson’s ‘InterSpace’ language with slim but very broad air vents that run the width of the dashboard, only interrupted by the waterfall style centre console. A freestanding panel sits on top which houses the touchscreen infotainment system and touch-sensitive climate controls. There’s a new push-button gear level which is similar to recent Hyundai models like the Sonata. There’s a large console between the front seats which will likely be reasonable to free up even more space in the cabin. 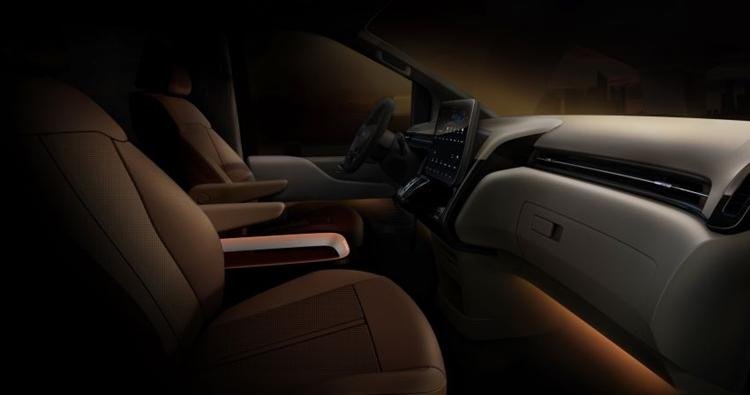 The interior teasers also gave us a glimpse of the second-row captain seats which will be likely be offered in the top models and appears to be very comfortable with its wraparound headrests and pop-up leg rests. Hyundai did not release any technical details with the teasers, though it is expected to be offered with a range of petrol and diesel engines, with the oil-burner being more suited for its purposes. Further information will be coming in the near future.